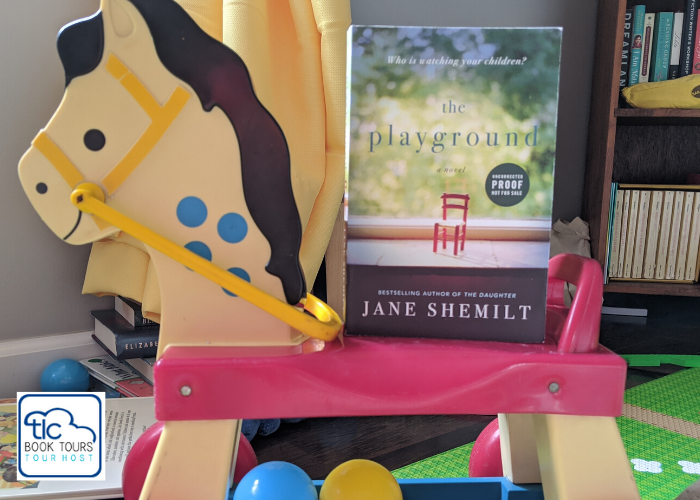 Ever wonder what happens to your children when you aren’t paying close enough attention? The Playground is a chilling reminder that kids are capable of more than we could ever dream. Over the course of a summer, three families develop a close friendship. While the parents are bonding, hiding secrets, and having affairs, the children are left to themselves.

After tragedy strikes not once, but twice, the parents finally realize something has gone horribly wrong. There might be someone obvious to blame, but is it really the fault of all of them?

I wasn’t quite sure what to expect from this novel. It sounded like a mix of a normal family/friendship drama and a creepy thriller. There are definitely dark undertones throughout the book, but wasn’t until the last third that the sinister actions came to light.

I prefer reading about likable characters, so when the adults started behaving badly I sort of lost interest. It was frustrating to watch them make bad decisions and neglect their children, even though I’m sure that sort of thing happens all the time.

By the end though, I was riveted as the true nature of the characters was revealed. I don’t often read twisty plots, so it was fun to go through the unraveling process. It’s fair to say I wasn’t completely surprised by the ending, but it didn’t play out exactly as I expected.

My rating of The Playground is 3.5 stars. Since this isn’t my usual genre but it still captivated me for most of the ride, I think anyone who enjoys a good twisty plot will love this. Thanks to TLC Book Tours for sending a copy of this book to review!

Big Little Lies meets Lord of The Flies in this electrifyingly twisty follow-up to Jane Shemilt’s breakout debut The Daughter.

Over the course of a long, hot summer in London, the lives of three very different married couples collide when their children join the same tutoring circle, resulting in illicit relationships, shocking violence, and unimaginable fallout.

There’s Eve, a bougie earth mother with a well-stocked trust fund; she has three little ones, a blue-collar husband and is obsessed with her Instagrammable recipes and lifestyle. And Melissa, a successful interior designer whose casually cruel banker husband is careful not to leave visible bruises; she curates her perfectly thin body so closely she misses everything their teenage daughter is hiding. Then there’s Grace, a young Zimbabwean immigrant, who lives in high-rise housing project with her two children and their English father Martin, an award-winning but chronically broke novelist; she does far more for her family than she should have to.

As the weeks go by, the couples become very close; there are barbecues, garden parties, a holiday at a country villa in Greece. Resentments flare. An affair begins. Unnoticed, the children run wild. The couples are busily watching each other, so distracted and self-absorbed that they forget to watch their children. No one sees the five children at their secret games or realize how much their family dynamics are changing until tragedy strikes.

The story twists and then twists again while the three families desperately search for answers. It’s only as they begin to unravel the truth of what happened over the summer that they realize evil has crept quietly into their world.

But has this knowledge come too late?

While working full time as a physician, Jane Shemilt received an M.A. in creative writing. She was shortlisted for the Janklow and Nesbit award and the Lucy Cavendish Fiction Prize for The Daughter, her first novel. She and her husband, a professor of neurosurgery, have five children and live in Bristol, England. I really enjoyed this one, it was a bizarre ride! Thank you for being on this tour! Sara @ TLC Book Tours

I have no idea who the two men are that arrived at the house in the last chapter!!!

I must be missing the twist- what happened at the end with the two men and Grace in the epilogue ??

I think it was Eric, Eve’s husband, and Martin, Grace’s husband. She talks about how she knew one of the faces for most of her life and how she recognized the other also.