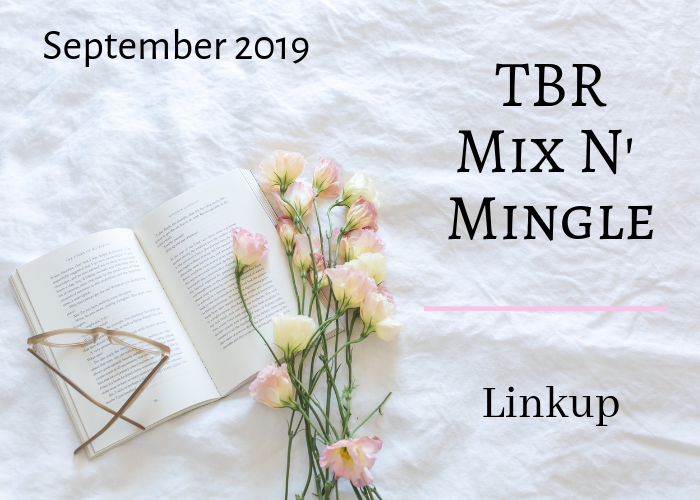 Happy Fall y’all!! I know it’s technically not autumn yet, but a girl can dream, right? I hope everyone had a relaxing and enjoyable Labor Day weekend. We’ve got another edition of TBR Mix n’ Mingle today where you can get excited about your next read or add another book to your ever growing To Be Read list! Join us on the first day of each month as we share our most anticipated reads of the month ahead.

There’s that reminder again – we’re changing our Mix n’ Mingle to the first day of the month!

Make sure to add your TBR list in the linkup at the bottom of the post. Don’t forget to check out all of the other TBR lists linked as well! Don’t have a blog? Tell us about the books you want to read in the comments below.

Here’s what we’re reading this month…

I only have one TBR this month – and it’s Helen Ellis’ new book Southern Lady Code, which I just got from the library (audiobook style, because they are categorically funnier hearing out loud). Last year, I read Ellis’ American Housewife, which was just about the most weird and wonderful conglomerate of short stories that I had ever digested.

Southern Lady Code, which was released this year in April, promises to be another compilation of all things not-so-mild mannered. From Goodreads, the part that has COMPELLED me to read this is the following:

Helen Ellis has a mantra: “If you don’t have something nice to say, say something not-so-nice in a nice way.” Say “weathered” instead of “she looks like a cake left out in the rain.” Say “early-developed” instead of “brace face and B cups.” And for the love of Coke Salad, always say “Sorry you saw something that offended you” instead of “Get that stick out of your butt, Miss Prissy Pants.”

September is my favorite month! It’s a super busy month for my family – my baby girl turned one (😱) on the first, my birthday is on the 18th, and my anniversary is the 21st. We have so much going on, it’s going to be a tough month for reading! I’m going to give it a go though, of course 🙂 Here’s what’s on my bookish agenda:

Chronicles of a Radical Hag (with Recipes) by Lorna Landvik: I’m about 100 pages into this one! I’m enjoying it so far – it’s definitely got some Minnesotan humor/sentiments in it, which is my kind of thing :). Definitely more of a lighthearted, fun kind of read. It’s a nice break from heavier hitters!

The Great Believers by Rebecca Makkai: This is the Girly Book Club’s pick for September. This book is super buzzed about, and has been optioned for TV by Amy Poehler. In short, it’s about the AIDS crisis in 1980’s Chicago. I’m looking forward to seeing what all the hype is about and weigh in on whether the book deserves it!

There’s lots of “required reading” this month, but looking forward to all of it!

After the Flood by Kassandra Montag
I feel like it’s been a while since I read a good dystopia, and I’m looking forward to this one! I’m scheduled to be a part of the blog tour here soon, so keep an eye out for my review on September 13th.

Beloved by Toni Morrison
I’ve never read this Morrison classic and, since her recent death, one of my book clubs wanted to pick one of her novels for our October meeting. This was the winner, and I’m glad I’ll finally have a pressing reason to pick it up.

The Historian by Elizabeth Kostova
This vampire novel is definitely not my usual read (though I will admit to reading the Twilight series when I was younger), but it’s the pick for an upcoming book club, so I’ve got no choice but to give it a try. Despite its length, I’ve been assured it’s a quick read. Here’s hoping — I’ve only got a few weeks and lots of other books to read!

Head on over to The Hungry Bookworm to check out the rest of Megan’s September TBR list.

Never Have I Ever by Joshilyn Jackson – This is my audiobook selection for the month! The only other Jackson novel I’ve read is The Almost Sisters, but it’s one of my absolute favorite books. Her latest is a bit of departure from her usual stories since it’s more of a murder mystery, but I’m excited to start it.

Twice in a Blue Moon by Christina Lauren

Christina Lauren, two friends who write together, are an undeniable powerhouse of the contemporary romance genre. Their stories are guaranteed to be full of wit, heat, and a fast-moving plot. In their new release coming out in October, old flames are given another chance at love.

Check out Never Enough Novels for the rest of Rachel’s September 2019 TBR List!

What are you planning to read this month?

Join our linkup below and share your TBR lists!

I just got Never Have I Ever yesterday and am so excited to get into it! American Housewife and Southern Lady Code are on my TBR. I hadn’t heard about The Great Believers, but the synopsis has me intrigued so I’ll have to check it out!

[…] guys! So, September was an actually BOMB month for me, reading-wise. Turns out, sometimes not setting a big goal can be […]