Review: The Hound of Justice

The Hound of Justice is the second installment in the Janet Watson Chronicles, a variation of Sherlock Holmes with a modern-day twist. In the first book of the series, A Study in Honor, we met the series’ protagonist, Janet Watson. A former surgeon in the military, Watson lost her arm on the front lines of the New Civil War in a near-future America. She meets the mysterious and impossible Sara Holmes and together they embark on a covert mission to thwart a government conspiracy and save innocent lives.

I found The Janet Watson Chronicles a fresh and exciting take on a classic.  Casual homosexuality, a cast of strong and competent characters of color, and women in positions of power made the tired characters of Holmes and Watson come alive for modern-day readers. Futuristic and sci-fi elements added a tone reminiscent of Octavia E. Butler.

Satisfied with the elements of the first installment, I was eager to get into The Hound of Justice. It did not disappoint. We meet up with Holmes and Watson again as they undercover pernicious plots from a leftist group to overthrow the current administration.

Janet Watson is a difficult character to root for. She is so consumed by her own depression and inner-demons that it’s difficult to see any glimmers of her true personality. It’s obviously a commentary on the atrocities of war and the very real effects of PTSD veterans experience.

The Hound of Justice was a compelling read, full of twists and turns, political turmoil, and warnings for what our future could become, as often found in speculative fiction. Like A Study in Honor, there were a few plot holes, but I felt they didn’t take away from the overall flow and theme of the book. O’Dell is a strong and emphatic write. I’m looking forward to the next chapter of the Janet Watson Chronicles. 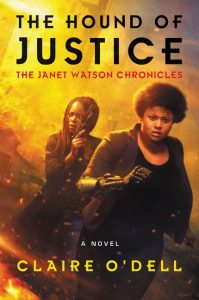 About The Hound of Justice

Dr. Janet Watson and covert agent Sara Holmes, introduced in the acclaimed A Study in Hour, continue their dangerous investigation into the new American Civil War with the help of fresh allies, advanced technology, and brilliant deduction in this superb reimagining of Sherlock Holmes.

It’s been two months since Dr. Janet Watson accepted an offer from Georgetown University Hospital. The training for her new high-tech arm is taking longer than expected, however, leaving her in limbo. Meanwhile, her brilliant friend and compatriot, Sara Holmes, has been placed on leave–punishment for going rogue during their previous adventure.

After an extremist faction called the Brotherhood of Redemption launched a failed assassination attempt on the president that caused mass destruction, Holmes, who is now operating in the shadows, takes on the task of investigating the Brotherhood. Holmes is making progress when she abruptly disappears.

When Watson receives a mysterious message from Holmes’s cousin Micha that indicates that Sara Holmes’ disappearance might be connected to the Brotherhood and to Adler Industries, Watson and Micha go on a high-stakes mission to reunite with Holmes once more.

Together, Watson, Holmes and Micha embark on a thrilling, action-packed journey through the deep South to clear Holmes’s name, thwart the Brotherhood’s next move, and most important, bring their nemesis to justice for the atrocities she’s committed in the New Civil War. 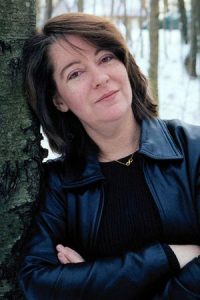 Claire O’Dell grew up in the suburbs of Washington, D.C., in the years of the Vietnam War and the Watergate Scandal. She attended high school just a few miles from the house where Mary Surratt once lived and where John Wilkes Booth planned for Lincoln to die. All this might explain why she spent so much time in the history and political science departments at college. Claire currently lives in Manchester, Connecticut, with her family and two idiosyncratic cats.

Review: No Hiding in Boise by Kim Hooper

Review: I Thought You Said This Would Work...

I’m glad that you enjoyed this. Sometimes the characters that are the hardest to root for are the ones who need the encouragement the most, you know? I think about that often. Thank you for being on this tour! Sara @ TLC Book Tours