Review: On the Same Page 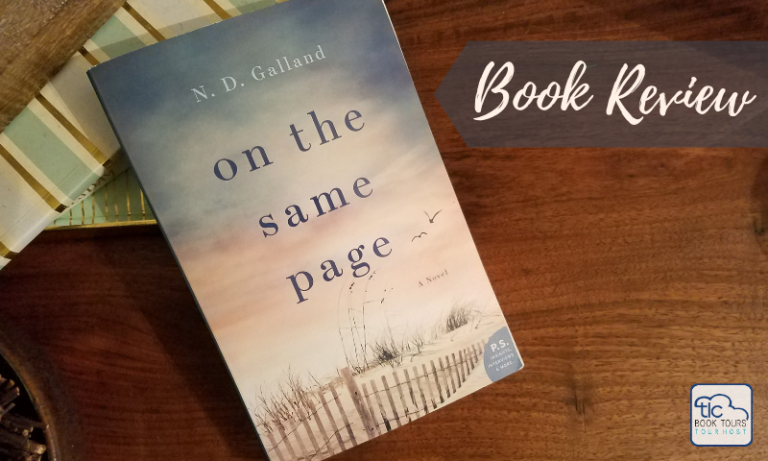 Story: Joanna Howes is called to return home to Martha’s Vineyard to play nurse for her injured uncle. A set back during recovery has Joanna facing months of care taking instead of weeks, and turns her entire world upside down. With a relationship in her adopted city of New York strained, bank accounts threatening and a crotchety invalid hurling insults, it is all Joanna can do to withstand the island’s brutal and desolate winter. As a writer, Joanna finds comfort in work, but having enough work to pay the bills gets her into a dicey situation, especially when she meets the subject of the island’s biggest story. On the Same Page by N. D. Galland shares Joanna’s struggle with identity and priorities with just enough romance to warm up even the chilliest winter day.

The bluffs of West Chop, the lazy stretch of the North Shore unfurling up-Island toward the Aquinnah lighthouse. It wasn’t a dramatic landscape, just the cobbled moraine of a dying glacier. Perhaps it was not even beautiful.

Why: I love a good romance story and was intrigued by the book jacket’s description of Martha’s Vineyard’s “split personality” from season to season. That added some depth for me since I wasn’t looking for what I think of as “beach read” romances. The main character is also a journalist and I have a journalism background, so it seemed like a good fit for my personality and reading tendencies!

In Manhattan he would have been just another suit and Joanna would not have registered him in the sidewalk throngs at rush hour. Here, in this rural village in midwinter surrounded by plaid, denim, and camouflage-green flannel, he looked almost provocatively ridiculous.

Opinion: It took me a little while to get into this book, but I ended up hooked and would say that I liked it. The descriptions of the island of Martha’s Vineyard and the little snippets of history that Galland shares were some of my favorite parts! There is a lot of natural imagery throughout the book and as Galland is a resident of the island, it makes sense that her depictions would make you feel as if you’ve seen it for yourself. The disconnect for me, though, was the language of the main characters – specifically Joanna and Orion. I get that they were both English majors so they enjoy using highfalutin language (see what I did there??), but the moments when they curse or lower the vocabulary a few bars make them so much easier to relate to! Generally speaking, however, I enjoyed the story, the characters and their banter, and was relatively content with the ending.

Everywhere was thigh-high underbrush of scraggly, leafless huckleberry and blueberry, underlain with the russet carpet of fallen oak leaves. Endless acres of this. The arboreal monotony calmed some part of her like a visual lullaby, soft and familiar from childhood.

Recommendation: I wouldn’t put this book into the romance genre, despite the element of romance in the storyline. There are really only a couple of romantic scenes that are barely PG-13 rated, and I think this is more a book for readers who want to think about the challenges of class clashes, seasonal depression, or even local politics. Those topics make it sound somewhat dark, but I think Galland does a good job of painting a realistic picture of the hardships a destination spot like Martha’s Vineyard faces without choosing a side. Sure it’s fiction, but I think readers who like modern dramas that could easily be based in fact will love this book. My only caution is that you may want to have a dictionary handy or pulled up on your phone!

In a week, perhaps ten days, there would be green. In a fortnight, it would be impossible to remember that it had ever been winter.

About On the Same Page

From the critically acclaimed author of Stepdog and The Fool’s Tale comes a romantic comedy that tells the story of one journalist secretly juggling two bylines for competing newspapers on a small island.

One island, two newspapers, and the reporter who played them both

Joanna Howes is a Martha’s Vineyard native who left the Island at eighteen and moved to New York City to become a writer. Now in her thirties, she reluctantly returns to care for her cranky, injured uncle. Needing income, she freelances for one island newspaper (the one Uncle Hank likes). But that doesn’t cover her bills, so she creates an alter ego to write for the rival paper (the one Uncle Hank doesn’t like).

The Vineyard has a split personality – part elite summer resort, part working-class small town. The Island’s two papers –the Journal and the Newes – are famously at odds with each other and reflect the seasonal schism in their reporting. Everybody’s shoulder seems to have a chip on it.

Joanna gets personally ensnared in a messy situation she’s assigned to write about for both papers: a wealthy seasonal resident sues the town for the right to use his private helicopter. When Johanna agrees to a cup of coffee with the witty, handsome stranger she meets at a zoning board meeting, she has no idea she’s made a date with Orion Smith, helicopter owner. Orion, meanwhile, doesn’t realize Joanna is the niece of his political nemesis, Henry Holmes.

Joanna scrambles to keep her disparate identities separate from each other in the tiny off-season community, but everything she does just gets her into deeper trouble…and further complicates her budding romance with the exasperating charmer she’s doing her best not to fall for.

A story about the half-truths we tell ourselves – and others – especially when our hearts are on the line.

N. D. Galland is the author of the historical novels Godiva, I, Iago, Crossed, Revenge of the Rose, and The Fool’s Tale, as well as the contemporary romantic comedy Stepdog, and the New York Times bestselling near-future thriller The Rise and Fall of D.O.D.O. (with Neal Stephenson). She lives on Martha’s Vineyard.

Check out these other sites for more on On the Same Page!