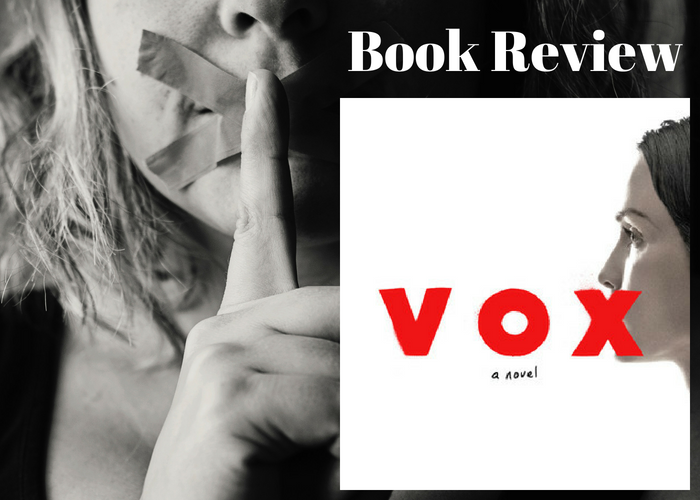 The average person speaks 16,000 words a day. Imagine if you were limited to just 100. Such is the case for women in Christina Dalcher’s new novel Vox. Like many feminist dystopias, it brings to life a future both thought-provoking and horrifying. I couldn’t resist picking it up, and then I had a hard time putting it down!

As a woman who values the written word and the ability to express myself freely, I found the prospect of being limited in what I could say or write harrowing. Dalcher, who has a doctorate in theoretical linguistics, clearly feels the same way about such censorship. She crafted a riveting storyline centered around a character not unlike herself, Dr. Jean McClellan, who has been effectively silenced in this new world.

I was captured from the first page, where every aspect of Jean’s life and that of her family has been greatly affected by the speech limitations. Half the workforce is now forced to remain home, meaning men like her husband are working unsustainably long hours. Young girls are no longer taught to read or write; her six-year-old daughter’s education is focused around home ec and she is rewarded for remaining silent. Her sons gain a sense of entitlement that has surprising consequences. Jean often finds herself wondering why she didn’t do more, didn’t speak out before it was too late.

The novel raises timely questions about the power of expression and its importance in both personal and political freedom, especially for women and minorities. If you’ve enjoyed dystopias like The Handmaid’s Tale or The Word Exchange, this is one you shouldn’t miss.

book reviewdystopiafeminismfictionI would recommend this book to otherswomen
Share 0 FacebookTwitterPinterestEmail

[…] “I was captured from the first page, where every aspect of Jean’s life and that of her family has been greatly affected by the speech limitations.” — Literary Quicksand […]