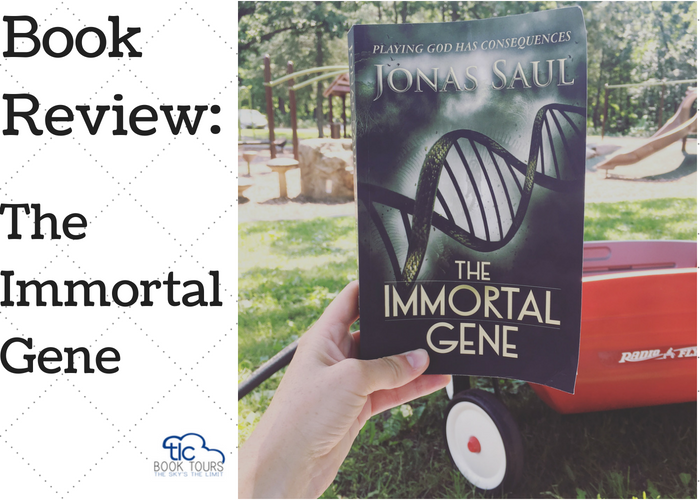 I was irritated because the nurse called us back to the examining room as soon as we walked in the door. Once we were settled and she left the room with my one-year-old happily playing on the floor, I pulled it out of my on-purpose-oversized-bag: The Immortal Gene. Since I’d started reading it the day before, I couldn’t put it down. I found myself bringing it everywhere with me, trying to sneak in a few pages whenever I could. It was downright addictive.

Jake Wood is a homicide detective in a sleepy town outside of Toronto. His department is rocked when a serial kill known as the Blood Eagle Killer strikes in their area. Committed to capturing the psychopath responsible for the killings, Jake signs onto the case, but he doesn’t get a chance help.

The next day, his friend begs for his help in Brazil and he boards a plane to the Amazon. Things feel off from the start and end up going terribly wrong. He wakes up from a coma 18 months later.

With the Blood Eagle Killer primed to strike again, Jake’s old partner asks him for help. He is able to offer his assistance, but in ways he never thought possible.

This book is a page-turner. I found myself reading instead of doing almost anything else out to find out what happened next. I found this story different from other detective novels because part of it was written  from the serial killer’s perspective. It added a level of unmatched creepiness. The novel also had a hokey super-hero quality that added to its charm.

Even though I enjoyed reading the book and devoured it within days, there were a few things that made it fall a little flat for me. First was the violence. The Blood Eagle Killer was known to perform some archaic war-time ritual on his victims. It was incredibly gruesome and described in great detail. Definitely not for the squeamish.

There were also some story lines left unexplained. I’m sure this is because the book is the first in a series about this detective. Even with that knowledge, there was still a lot going on that didn’t really add up. The serial killer/detective plot line didn’t with mesh with the Amazon/scientific research plot line. They were two separate stories that didn’t really fit together.

Finally, I find myself increasingly drawn to books written by women, and this book was very obviously written by a man. The serial killer had the deranged viewpoint that women existed only for sexual pleasure to serve men and be violated. This was never really countered at any point in the book and didn’t sit well with me.

Overall, this was a good, quick read, but didn’t leave me with the feeling of a really amazing novel. I probably won’t be reading the next book in the series.

About The Immortal Gene 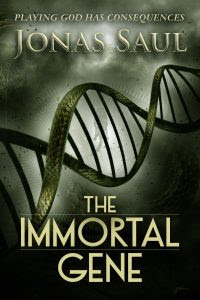 Jake Wood has it made. He is a tough homicide detective with a partner who’s like a brother, and he’s about to marry the girl of his dreams.

Then Jake learns a close friend is missing and travels to South America in search of him. After a freak accident in the Amazon Rainforest, Jake wakes up in the hospital—eighteen months later. Long presumed dead, he discovers his fiancée is married and pregnant, his house was sold, his job is gone, and his partner transferred to another city to become lead detective on a serial killer case.

Jake buys a cabin in the woods and tries to leave the world behind, until his home is broken into and he discovers he was targeted—but why? When Jake’s former partner requests his aid in catching the Blood Eagle Killer, he offers to help find whoever is behind Jake’s recent trouble.

This leads to Fortech Industries, a pharmaceutical company secretly researching a way to create an immortal gene. Now they intend to destroy their only error—Jake Wood—who has become  something more than human. 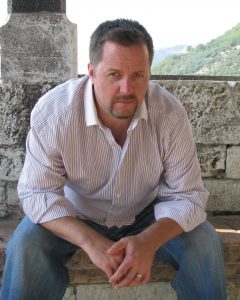 Jonas Saul has sold over 2 million books. On multiple occasions, he has outranked Stephen King and Dean Koontz on the Amazon Most Popular Top 100 Authors list.

He has traveled extensively throughout the world to scout settings for his thrillers, spending several years between Greece, Italy, Denmark, and Hungary.