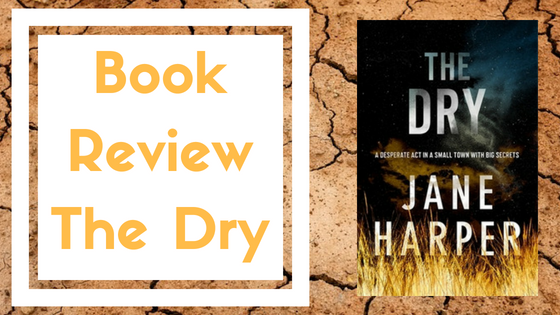 Stifling heat. Dry, cracked earth. A parched, empty landscape as far as the eye can see. Jane Harper’s descriptions of a small farming town in the Australian outback had me sweating all the way through her thrilling mystery, The Dry. I suggest if you read this book that you keep a glass of water handy; I was so gripped by the desolate setting that Harper portrayed, I started to feel dehydrated!

The story follows Aaron Falk, a former resident turned Federal agent, as he returns to his home town in the middle of a drought after his childhood friend and family are brutally murdered. He intends to stay only for the funeral as he cannot bear to spend more than 24 hours in the backwards town he used to call home, but is persuaded to stay to find out what happened to his friend. He soon discovers that his past demons and dark secrets are tangled with the present, and brushing out the knots is not going to be as straightforward as anticipated.

Harper’s writing style is subtle and furtive. There are no obvious attempts to suck the reader in, nor is there a clear, predictable formula for the story. One of the aspects of this book I loved the most was the fact that I didn’t realize how hooked I was until I was three quarters of the way through it. It snuck up on me, captivating me and catapulting me into the barren landscape without warning. Unless you’re a better detective than I (which is entirely possible, I tend to invent storylines and clues rather than focus on what is right under my nose), there is no clear suspect—you are left guessing and second guessing the entire way through.

The Dry was a gripping read, with characters that were relatable and thus likable, as well as characters that were on the total opposite end of the spectrum. The detestable behavior of the inhabitants of the fictional town of Kiewarra are a stark reminder of just how far we might go when times are hard and desperation becomes the driving force behind our actions. The land itself is as desperate for water as the town is to hide its dark, unforgivable secrets.

Unsurprisingly, for me The Dry was 100% a 5 out of 5. I know it’s always dangerous to set other readers’ expectations so high, but that’s how confident I am that you will be blown away further than a tumbleweed in the desert by Jane Harper’s incredible debut novel.

book reviewbookscrimefictionI would recommend this book to othersreview
Share 0 FacebookTwitterPinterestEmail

[…] writes phenomenal thrillers. I started with her first novel, The Dry (check out my review here!), and was instantly hooked. The Lost Man is her third novel, and if it’s possible, I loved […]