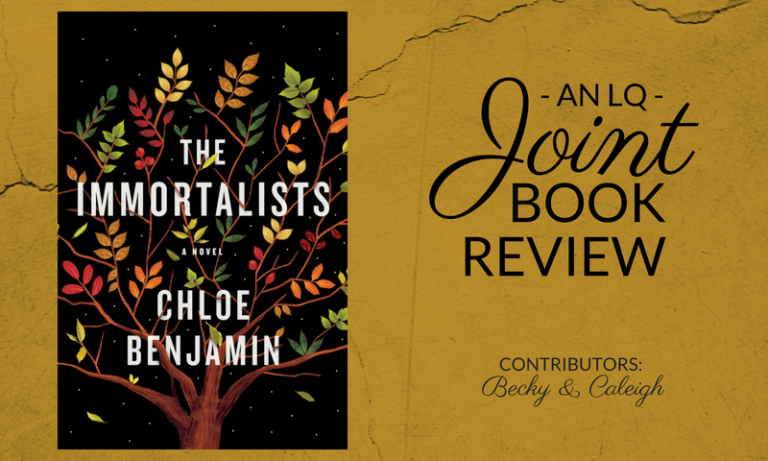 The Immortalists has been one of 2018’s most widely anticipated and recommended novels. For those of you who aren’t familiar with breakout novelist Chloe Benjamin, the story revolves around the lives of 4 siblings, who find out as young children the day that they will die. Amazing premise, right?! The question of “Would you want to know when you will die” is huge, and a lot of us have really different emotional responses to this question. So, of course LQ had to investigate! While Caleigh took on the hardcover original release, Becky listened to the audiobook – here’s our take on this book!

Caleigh: Ok the first thing I noticed about this book is the cover. I can’t help it – it’s beautiful and absolutely deserves a nod to Sandra Chiu. There is a fabulous interview with Ms. Chiu about the development of what came to be this book, and you can find it here: http://spinemagazine.co/articles/sandra-chui.

This book came with some pretty hefty nods. A New York Times Bestseller, with a glowing review from Nathan Hill (author of The Nix) among others, I was expecting a 5 star, can’t put it down, best book of 2018 read. And I have to say, that’s not really what happened for me. But more on that in a minute.

Becky: I haven’t been a reader that jumps on newly released titles, especially ones with as much hype as The Immortalists has received. However, as dark as the idea of knowing your date of death is, I found the different snippets of story lines intriguing: romance, magic, control and immortality. I put my name on my library wait list and commended myself for choosing a book outside my comfort zone!

Who Was Your Favorite Character in The Immortalists?

Becky: If I have to pick a favorite sibling, it would be Varya. Not because I like her as a human being, but I feel like she has the biggest opportunity for growth and change. My true favorite character in the novel is Ruby, Klara’s daughter. To me, she represents a little of all four siblings and as the start of a new generation, she is a symbol of hope that I desperately needed as I worked to finish this book!

The other character I want to point out is Gertie, the Gold children’s mother. As I was listening to the audiobook, I would cringe whenever Gertie spoke. She grated my every last nerve, but the literary analyst in me wanted to dissect her. The children themselves provide enough problems and issues to tackle, but my opinion is that a lot of that stems from their mother. I may dislike her, but I think she’d make a fascinating English paper!

Caleigh: For me, it was probably Simon, the youngest child (and, sorry to spoil, the first to off it). While Simon is selfish and pretty stupid, he also has the most interesting life by far of the 4 siblings. Growing up as a young gay man, he moves with his sister Klara to San Francisco, right around the 1980’s. His fight to become a beautiful dancer is compelling, and his love story with the quiet African-American dancer Robert is tragic and ugly and wonderful. I think that this portion of the novel reminded me a little of RENT, and that’s kind of awesome.

However, I just can’t say that the other siblings had enough to redeem their “bad faults”. Varya the ice queen is cold as hell and even though she is a brilliant scientist, her quest is bordering on psychopathic. Daniel is a boring burn-out who basically has a last stand trying to take revenge on the fortune teller who tells them of their futures. Klara on the other hand is so immersed in her alcoholism and death-defying acts that I found it hard to see her real soul under the veneer of clouded judgement. I couldn’t really connect with any of the characters on a personal level, which was too bad. So yeah, Simon it is.

Let’s Talk About the Loneliness…

Caleigh: Yeah. Loneliness is probably the biggest theme in this story. Characters eschew relationships with each other and their significant others in order to keep this nugget of information to themselves. I found that super weird, because I think it would be something I would share if I were in their shoes. Instead, each character becomes successively lonely, including the Golds’ mother. Gertie has lost not only her husband but then endures tragedy after tragedy. This loneliness is also, I believe, the real source behind the mental illness undercurrent in this novel.

Becky: I agree with Caleigh – loneliness does seem to be the source behind the struggles in this book. Holding on to a secret of any size can pull a person from their relationships and create a sense of isolation. Multiply that by the fact that these particular secrets are literally about life and death, and it’s no wonder that the Gold children created huge gaps in their lives. I think this is an eye-opening reminder that loneliness is crippling and shows itself in many different ways.

…And the Belief in Destiny

Becky: I believe that all four children believe in their destiny to die on the day they were told. Some try to hide it, either by ignoring it or living without regard for themselves or others. Others try to avoid it or overcome it, only to aid the cause themselves because there don’t seem to be any other options for them. It’s an age old chicken or the egg question. Did destiny bring you here? Or did you bring yourself here because you believe?

Caleigh: I think the other really interesting thing about the siblings believing in their “fates” is their responses to it. The analyzer in me wonders why the 2 children with longer lifespans chose to live so carefully, when the 2 with shorter lives to live chose to do so recklessly. To me, it would have spurned the opposite reaction; please tell us in the comments what you think about this!!

What’s Your Rating, and Why?

Caleigh: 3 stars. I liked The Immortalists well enough. I didn’t find that Benjamin’s writing style was remarkable though, and since I really detested the characters and their lives, I wasn’t much connected to being in love with the story.

Becky: 3.5 stars. This wasn’t the book I was expecting. Not that I can articulate what that was exactly. I found it dark, heavy and not quite up to the level I thought it would be. I do see a lot of potential for folks that like to dive into fiction and analyze, but for me it was a book that felt “almost there.” My presumption is that comes from their situations being overly extreme and as Caleigh mentioned above – unrelatable. Snippets of connection just didn’t do it for me.

Did you read The Immortalists? Have something to say/add to our review? Tell us what you thought in the comments below!

I like this review style! I’m glad you guys read this because the quick summary sounds fascinating, but ultimately sounds like it’s not for me.