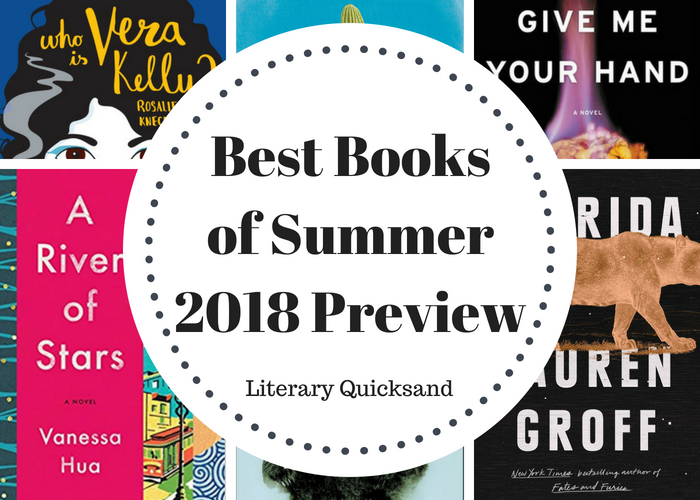 It’s hard to believe that we’re more than halfway through spring and summer will soon be descending upon us. For me, summer means longer days, weekend trips, a beach vacation, and lots and lots of reading. Hopefully, you’ll find yourself with some extra time for reading as well.

The start of a new season means more new books. There are a ton of new books coming out this summer and it can be overwhelming at times. So many books, not enough time. To help manage your ever-growing TBR, we’ve rounded up 10 of our most anticipated reads of the season.

With a few memoirs, psychological thrillers, and of course, the classic beach read, this list has a little something for everyone!

Well, That Escalated Quickly: Memoirs and Mistakes of an Accidental Activist

Why I want to read it: I loved Franchesca’s video, “Stuff White Girls Say… To Black Girls”. I find her smart, truthful and hilarious.

From the publisher: Franchesca Ramsey didn’t set out to be an activist. Or a comedian. Or a commentator on identity, race, and culture, really. But then her YouTube video “What White Girls Say . . . to Black Girls” went viral. Twelve million views viral. Faced with an avalanche of media requests, fan letters, and hate mail, she had two choices: Jump in and make her voice heard or step back and let others frame the conversation. After a crash course in social justice and more than a few foot-in-mouth moments, she realized she had a unique talent and passion for breaking down injustice in America in ways that could make people listen and engage.

From the publisher: The New York Times-bestselling author of Fates and Furies returns, bringing the reader into a physical world that is at once domestic and wild—a place where the hazards of the natural world lie waiting to pounce, yet the greatest threats and mysteries are still of an emotional, psychological nature. A family retreat can be derailed by a prowling panther, or by a sexual secret. Among those navigating this place are a resourceful pair of abandoned sisters; a lonely boy, grown up; a restless, childless couple, a searching, homeless woman; and an unforgettable, recurring character—a steely and conflicted wife and mother.

Invitation to a Bonfire

Why I want to read it: I’m always intrigued by stories about obsession. The 1920’s Russian refugee premise also sounds interesting.

From the publisher: In the 1920s, Zoya Andropova, a young refugee from the Soviet Union, finds herself in the alien landscape of an elite all-girls New Jersey boarding school. Having lost her family, her home, and her sense of purpose, Zoya struggles to belong, a task made more difficult by the malice her peers heap on scholarship students and her new country’s paranoia about Russian spies. When she meets the visiting writer and fellow Russian émigré Leo Orlov–whose books Zoya has privately obsessed over for years–her luck seems to have taken a turn for the better. But she soon discovers that Leo is not the solution to her loneliness: he’s committed to his art and bound by the sinister orchestrations of his brilliant wife, Vera.

Why I Want to Read It: I have a soft spot for memoirs. This one looks especially good. It’s highly anticipated, so hopefully it’ll live up to all the buzz.

From the publisher: Sick is Khakpour’s grueling, emotional journey—as a woman, an Iranian-American, a writer, and a lifelong sufferer of undiagnosed health problems—in which she examines her subsequent struggles with mental illness and her addiction to doctor prescribed benzodiazepines, that both aided and eroded her ever-deteriorating physical health. Divided by settings, Khakpour guides the reader through her illness by way of the locations that changed her course—New York, LA, Santa Fe, and a college town in Germany—as she meditates on the physiological and psychological impacts of uncertainty, and the eventual challenge of accepting the diagnosis she had searched for over the course of her adult life.

Why I want to read it: A promising debut author. There’s also something so mesmerizingly haunting about Appalachia.

From the Publisher: Rice Moore is just beginning to think his troubles are behind him. He’s found a job protecting a remote forest preserve in Virginian Appalachia where his main responsibilities include tracking wildlife and refurbishing cabins. It’s hard work, and totally solitary—perfect to hide away from the Mexican drug cartels he betrayed back in Arizona. But when Rice finds the carcass of a bear killed on the grounds, the quiet solitude he’s so desperately sought is suddenly at risk.

Who Is Vera Kelly?

Why I want to read it: Female espionage. Nuff said.

From the publisher: New York City, 1962. Vera Kelly is struggling to make rent and blend into the underground gay scene in Greenwich Village. She’s working night shifts at a radio station when her quick wits, sharp tongue, and technical skills get her noticed by a recruiter for the CIA. Next thing she knows she’s in Argentina, tasked with wiretapping a congressman and infiltrating a group of student activists in Buenos Aires. As Vera becomes more and more enmeshed with the young radicals, the fragile local government begins to split at the seams. When a betrayal leaves her stranded in the wake of a coup, Vera learns the Cold War makes for strange and unexpected bedfellows, and she’s forced to take extreme measures to save herself. An exhilarating page turner and perceptive coming-of-age story, Who Is Vera Kelly? introduces an original, wry and whip-smart female spy for the twenty-first century.

Why I want to read it: An in-depth character study with eccentric characters. Plus, Anne Tyler is awesome.

From the Publisher: Willa Drake can count on one hand the defining moments of her life: when she was eleven and her mother disappeared, being proposed to at twenty-one, the accident that would make her a widow at forty-one. At each of these moments, Willa ended up on a path laid out for her by others.

So when she receives a phone call telling her that her son’s ex-girlfriend has been shot and needs her help, she drops everything and flies across the country. The spur-of-the moment decision to look after this woman – and her nine-year-old daughter, and her dog – will lead Willa into uncharted territory. Surrounded by new and surprising neighbors, she is plunged into the rituals that make a community, and takes pleasure in the most unexpected things.

Give Me Your Hand

Why I want to read it: A cat-and-mouse game of drive and ambition.

From the publisher: Kit has risen to the top of her profession and is on the brink of achieving everything she wanted. She hasn’t let anything stop her. But now someone else is standing in her way – Diane. Best friends at seventeen, their shared ambition made them inseparable. Until the day Diane told Kit her secret – the worst thing she’d ever done, the worst thing Kit could imagine – and it blew their friendship apart. Kit is still the only person who knows what Diane did. And now Diane knows something about Kit that could destroy everything she’s worked so hard for.

A River of Stars

Why I want to read it: It’s received a raving review by Celeste Ng. An immigration story by an exciting new author.

From the publisher: In a powerful debut novel about motherhood, immigration, and identity, a pregnant Chinese woman makes her way to California and stakes a claim to the American dream.

What are you excited to read this summer?

*This post contains affiliate links. That means we receive a small commission from any products purchased through the links on this post at no additional cost to you.

I would recommend this book to others
Share 0 FacebookTwitterPinterestEmail