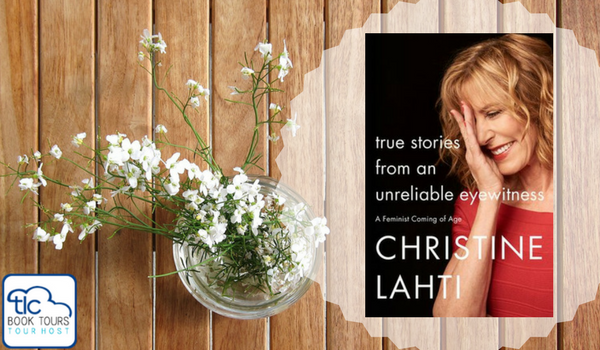 The subtitle of this book is A Feminist Coming of Age, which is what intrigued me, and I’m glad I ended up picking this one up! To put things in perspective, I had just finished Pachinko, which is a great read but it’s long and pretty heavy. I picked up True Stories and read almost the entire thing on one blissful Saturday morning! It was the perfect book to pick up after a heavier read.

Lahti is an actress and a director, and the book is a series of stories from her entire life thus far. During the time that she was working on breaking into the industry, things were very difficult for women. Case in point: As a 23-year-old, she decided to audition for a couple national commercials. She auditions and is called back right away and told that she’s been chosen for the job. Here’s an excerpt about what happens next:

A weight suddenly lifted from my chest. I was going to finally be a professional actress! And two national commercials – that could pay my rent for years. I could quit my fucking waitress job!

“Really, Mr. Ander – I mean, John? You have no idea what this means to me!” I asked him if he wanted me to read.

“Oh, no, you don’t have to audition, the commercials are already yours!”

I couldn’t believe it. I crossed all my fingers inside my pockets as he took my arm and walked me into his inner office. He sat down at his cluttered desk, picked up a used tissue, and wiped his forehead with it.

“Have a set, Christine.” He leaned back in his chair. “First of all, you should know you stand to make at least ten grand a piece on these, and with residuals…”

I stopped listeining and instantly pictured my new cockroach-free apartment with its separate bedroom and window air-conditioning unit.

“Holy shit! I mean…sorry, John, but this is so incredible! So when do I…”

He shuffled some papers on his desk as he said, “Well, it’s really quite simple, Christine. All you have to do first is have sex with the directors.”

Her stories are witty and fun to read, and they really open your eyes to how things were for women in the film industry (and likely still are in places). I recommend this one as a quick and enjoyable read, and you’ll learn a couple life lessons along with Lahti along the way.

This was a solid 4 stars for me. 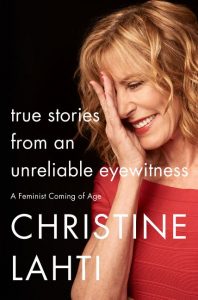 About True Stories from an Unreliable Eyewitness

For decades, actress and director Christine Lahti has captivated the hearts and minds of her audience through iconic roles in Chicago Hope, Running on Empty, Housekeeping, And Justice for All, Swing Shift, Law & Order: Special Victims Unit, God of Carnage, and The Blacklist. Now, in True Stories from an Unreliable Eyewitness, this acclaimed performer channels her creativity inward to share her own story for the first time on the page.

In this poignant essay collection, Lahti focuses on three major periods of her life: her childhood, her early journey as an actress and activist, and the realities of her life as a middle-aged woman in Hollywood today. Lahti’s comical and self-deprecating voice shines through in stories such as “Kidnapped” and “Shit Happens,” and she takes a boldly honest look at the painful fissures in her family in pieces such as “Mama Mia” and “Running on Empty.” Taken together, the collection illuminates watershed moments in Lahti’s life, revealing her struggle to maintain integrity, fight her need for perfection, and remain true to her feminist inclinations.

Lahti’s wisdom and candid insights are reminiscent of Nora Ephron’s I Feel Bad About My Neck and Joan Rivers’s I Hate Everyone—and yet her experiences are not exclusive to one generation. The soul of her writing can be seen as a spiritual mother to feminist actresses and comedic voices whose works are inspiring today’s young women, including Amy Schumer, Lena Dunham, Amy Poehler, Caitlin Moran, and Jenny Lawson. Her stories reveal a stumbling journey toward agency and empowerment as a woman—a journey that’s still very much a work in progress.

True Stories from an Unreliable Eyewitness is about the power of storytelling to affirm and reframe the bedrock of who we are, revealing that we’re all unreliable eyewitnesses when it comes to our deeply personal memories. Told in a wildly fresh, unique voice, and with the unshakable ability to laugh at herself time and again, this is Christine Lahti’s best performance yet. 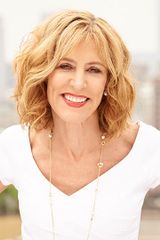 Christine Lahti is an acclaimed director and stage, television, and film actress with a career that spans over forty years. She won an Oscar for her short film, Lieberman in Love; an Oscar nomination for Swing Shift; a Golden Globe Award for No Place Like Home; an Emmy Award and a Golden Globe Award for Chicago Hope; and an Obie Award for Little Murders. On Broadway, she starred in God of Carnage and The Heidi Chronicles, among many others. Her films include Running on Empty and Housekeeping. Her television shows include Jack and Bobby, Law & Order SVU, and The Blacklist. She lives in New York City and Los Angeles.

It’s crazy that things like her “interview” really happened and continue to happen. I know it is reality, but it is still crazy to me.
Thanks for being a part of the tour!