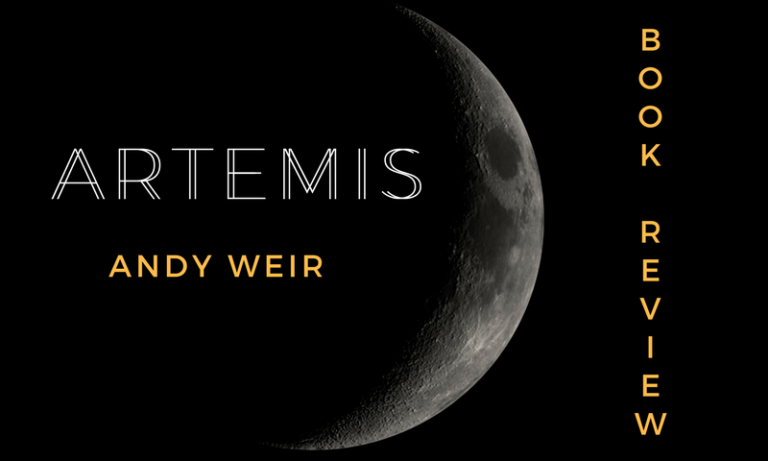 Andy Weir’s sophomore novel, Artemis, was released at the end of 2017, following his critically acclaimed The Martian which was published in 2012 with the movie quickly following on its heels. He also is responsible for the four page e-book The Egg, which continues to be one of my favourite philosophies on human existence today.

The Synopsis (no spoilers):

Similar to The Martian, Mr. Weir’s second novel reaches out into space, but just not quite so far this time. Artemis is set on our lunar satellite, the Moon, which has been colonized and is being run by a Kenyan conglomerate. The elitist rich and those who save for the trip of a lifetime make up a significant tourism industry for the colony. However, those who choose to live on Artemis primarily are made up of blue-collar and service-based individuals, of which our heroine Jasmine Bashara is one. Working as a dock worker/porter, and supplementing her income with some not-so-legal importation work (yeah, she’s a bad as h*ck smuggler), “Jazz” gets herself into some hot water when she accidentally ends up on the run from the Canadian Mountie Police authority as well as a gangster/thug/assassin when she crosses an international drug cartel.

Ok so first before I get into the good, the soft, and the wonderful about this book, I do have to reveal my bias. I am a woman in STEM; specifically, I’m a water engineer, so I’m decently familiar with a lot of the chemical processes and “tech talk” through the book (even though I 100% suspend all belief in current technical capabilities and overlook any/all scientific flaws in order to love it as much as I do). This probably tends to give me a slight bit more interest and love of Weir’s books than your average dude/dudette, because I actually fangirl for the guy. Leaving his career in software engineering to write cute techy fiction novels full time? I’m drooling.

Even though I try pretty hard to keep it together for my reviews, this one is going to be pretty informal, in reflection of the fact that I DEVOURED this book like the 14-year-old I am at heart.

So here’s the thing. Artemis is a “SAVE THE DAY” book, by which I mean that you never truly have a lot of fear for the main character’s outcome, and it’s not really novel in the way that it has stereotypical good guys, bad guys, and corrupt guys that have a motive for good reasons to do bad things. In that respect, it’s kind of like a Young Adult book. Cool.

But it’s also super edgy, guys. The main character, Jazz, is a Saudi-Arabian genius girl who loves math, welding, and is also really more of a boy’s girl. I don’t think I’ve ever identified so hard with a main character since like, Hermione Granger. Oh PLEASE let there be a movie adaptation for Artemis! Weir writes his female protagonist surprisingly well, with some no-holds barred attitude on sex and dating, and stylistically varies his writing as a narrator with pops of change from pen pal letters between Jazz and a Kenyan friend she makes on Earth. Her side-kicks are also fairly non-rote; you’ve got a gay guy who stole her ex-boyfriend, the actually super stereotypical engineering physicist who doesn’t get girls but is 100% adorable, the devout, strict but super awesome dad, and the grumpy head of EVA/going outside the bubbles to do moonwalks guy, who is also predictably sweet and helpful. There’s even the Mountie – thanks Mr. Weir for including my homeland in the cutest of fashions!

Before I forget: let’s talk cultures for a second. Weir discusses culture bubbles, how different groups from different ethnical backgrounds start to congregate in specialties, and how brilliant progressive economic planning can drag a country into the world’s limelight. He shapes life on the moon the way that Earth works; the Chinatowns and Little Italys of cities popping up in the midst of a lunar development. I loved the mosaic of culture in this book, as it seems pretty honest and helpfully inclusive.

My review would not be complete without a nod to dating the nerd. While I don’t consider myself to be a big fan of romance novels, and I tend to eschew the super conventional love story, I’m not dead inside. Jazz is such a strong, independent woman (who don’t need no man) but it’s evident through the book that she’s lonely. I liked that Weir didn’t let her off the hook and melt into some dude’s arms, but instead lets her understand the community that she has earned, as they support her after the big “meltdown” (spoiler? Mayyyybe….). Meanwhile, we have a male counter who basically idolizes the girl, and would do just about anything for her, without it verging on creepy. Also, I will reiterate: I love engineers, and that certainly played into my reaction, but that’s not all why I loved Svoboda. It’s pretty special when the girl gets to have a guy that she doesn’t need, rather than falling into some dude’s arms to save her. #Jazzbodo. Yeah, I’ll ship it.

I never knew that Andy Weir wrote “The Egg.” I’m amazed! I absolutely loved it and recently read The Martian and adored that too. Thank you for the insightful review, I will definitely add this to my list!