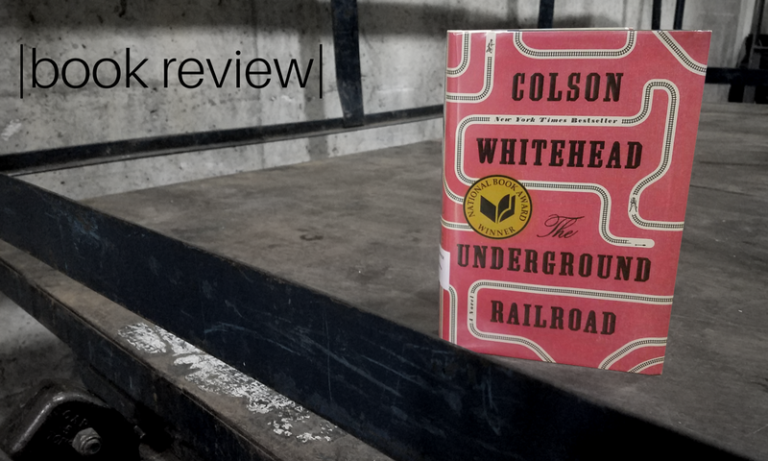 Story: Colson Whitehead delivers the odyssey of Cora, a third generation slave working on a plantation in the heart of Georgia. A stray abandoned by her mother – a “successful” runaway, Cora fights and scrapes to make her way in the world. When an unexpected invitation to escape the plantation is planted in Cora’s mind, the idea grows into action. Following her story along the Underground Railroad, Whitehead shares visions of the possibilities that await Cora in pre-Civil War America – each with its own kind of horrors. Tracked by notorious slave catcher, Ridgeway, Cora is forced to confront the true meaning of freedom and if she’ll ever find what she’s looking for.

Note: Kathleen wrote a great review of the audiobook version of The Underground Railroad as narrated by Bahni Turpin. Check it out!

Freedom was a thing that shifted as you looked at it, the way a forest is dense with trees up close but from outside, from the empty meadow, you see its true limits. Being free had nothing to do with chains or how much space you had.

Why: I chose to read this after a strong recommendation from my brother-in-law. One of my bookish goals for this year is to read more titles outside of my comfort zone, and I admittedly avoid reading a lot of heavy literature. I am a very empathetic reader and often times feel physically and mentally drained after passages or books that challenge my emotions. However, with a trusted recommendation and knowing how highly regarded this novel is, I decided to go for it. I’m glad I did.

To see chains on another person and be glad they are not your own – such was the good fortune permitted colored people, defined by how much worse it could be any moment.

Opinion: Generally speaking, most of us probably know the common story of the Underground Railroad and the effects of its successes and failures. We are taught about the harsh realities of slaves’ daily lives and the unspeakable acts of violence that were tolerated at the time. As a history lesson, we understand, but can keep a very objective view. Whitehead does an incredible job of putting a face, a name and a human element into that shared history. The narrative takes readers through Cora’s own education about the state of affairs in America’s slave states and beyond. The plot forces them to address the atrocities that occurred and the scars – physical and mental – that were left behind. Themes like “the meaning of freedom” ask to be considered and mulled over and over.

The construction of the book was what I believe made it supremely effective. Not a fan of the twisted timeline and vignette style at first, I found that Whitehead’s order and character development gave the depth and breadth to elicit an emotional reaction. Cora’s story does not simply affect her and the slave catcher. She herself recognizes the many faces – known and unknown – who help her, and Whitehead provides their stories to create context and meaning to their lives. In essence, it is not really Cora’s story at all, but that of a troubled America.

“If you want to see what this nation is all about, I always say, you have to ride the rails. Look outside as you speed through, and you’ll find the true face of America.”

Recommendation: In her review, Kathleen calls this book “required reading” and I would tend to agree. I could not read it quickly as it is a heavy story that provokes thoughts about today’s world and how far we’ve come, or haven’t come, depending on your view. I would recommend this title for readers who appreciate unique writing styles and stories that make readers work to fill in pieces of the puzzle. The plot moves along, but the novel is driven more by the characters than the action. Many of the strongest figures in the book are women which makes it a good option for our current society, but it does contain some graphic depictions that may be a bit much for sensitive readers.

Her freedom was, as Socrates had said, in the beauty of a life lived without pretending.

[…] (China Rich Girlfriend), as well as The Underground Railroad by Colson Whitehead. After reading Becky’s review, I couldn’t help but pick it […]

[…] have said that if you’d have asked me about halfway through. Similar to my feelings reading The Underground Railroad, I had a hard time consuming a lot of pages in one sitting. The narrative is complex and the […]