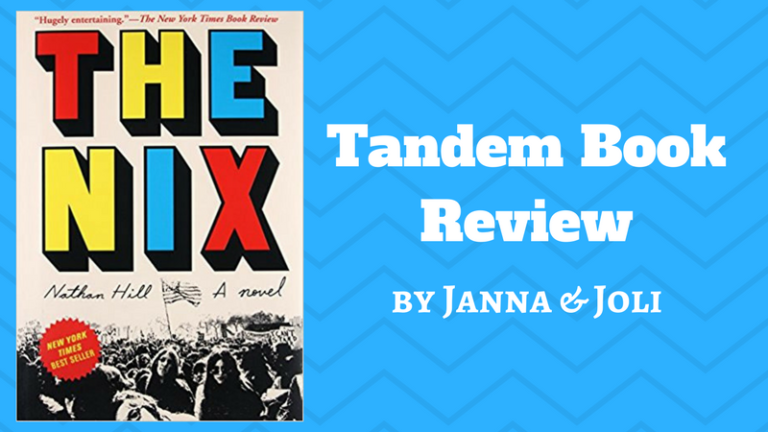 Janna and I just read this for our book club (The Girly Book Club), and we both agree on a lot of things about it! So, since we read it at the same time and talked about it in a group together, we’ve decided to make this a Q&A tandem book review. Here we go!

What would you say to anyone who’s thinking about reading The Nix but is put off by its size?

Joli: I’d say it’s worth it. The only thing I’d recommend is not reading this book for a deadline. We read it for book club, and I found myself scrambling to finish it in the last couple of days. I really wish I could have had more time with the second half of the book. The book has multiple storylines, so I didn’t feel like I was reading just one huge, long story.

Janna: I agree with Joli—it’s worth it, but it is big, I won’t lie! This was one of the best book club discussions I’ve been to because there was so much to digest and think about. Family trauma, shame, generational differences, the list goes on.

This book is full of characters, and is told from all of their perspectives. Did you like the author’s choice to do it this way, or was it too much for you?

Joli: I loved it! I’m an English major nerd, so I love seeing all the choices authors make. I think hearing the stories told by each different character really added to the overall experience of reading this novel. The overall story is really enhanced by all those different perspectives. A major theme in the book is the differences between generations (in terms of politics, technology, and a couple other issues), and I don’t think the book would have been able to accomplish that as excellently without actually telling the story through the multiple perspectives.

Janna: A lot of books that switch points of view throughout struggle with writing characters who sound and feel different from one another, but Hill does a phenomenal job of making each character memorable on their own. The characters felt very lived in, even when some of them were clearly exaggerations of reality.

All of that said, which was your favorite character/storyline?

Joli: Oh man, I really liked several of them! Pwnage was just funny and tragic, which I liked, but I guess one that sticks out is Faye’s story of her life in college. She’s the mother in the story, and I really enjoyed the flashback story we got from her. It doesn’t come in until closer to the end, and it really helps tie up the novel as a whole piece.

What were your overall feelings about this book? Would you recommend it?

Joli: I would definitely recommend it. You have to be in the mood for something more literary than sit-back-and-enjoy, but overall I thought this book was a well-written piece of art. Everything just fit together so perfectly for me: the writing style, the multiple characters and viewpoints, the nuggets of humor in between the more serious themes…I just really like this one.

Janna: I’ll keep it short since Joli said it so well. I highly recommend this if you’re into literary fiction, and enjoy character-driven stories about imperfect people.