Review: Among the Lesser Gods 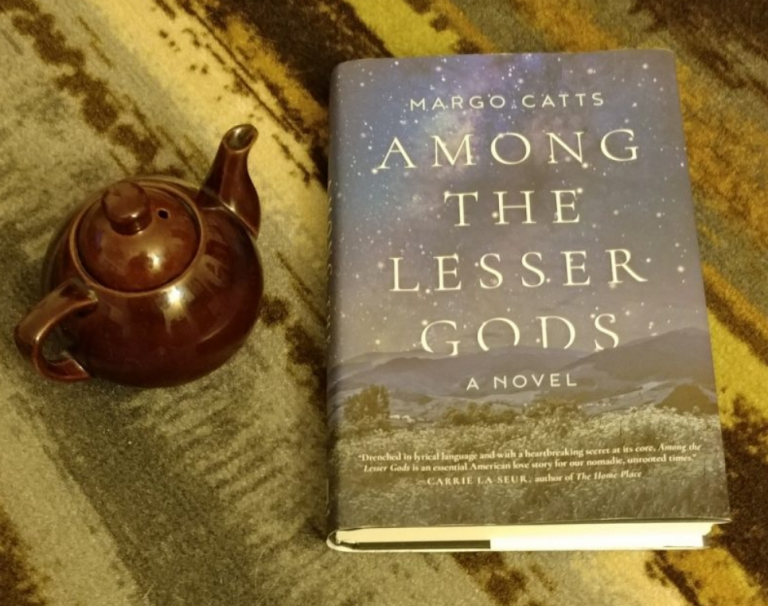 I wasn’t thinking about rescue when my grandmother’s letter came — Among the Lesser Gods, Margo Catts.

You know you’re in for a good read when the first line captures your attention. I’m reminded of the importance of first lines every sip I take of my tea at work with my First Lines in Literature mug. Margo Catts’ debut novel, Among the Lesser Gods, is an impressive novel about learning how to heal, forgive, and handle the chaos that is life. Elena Alverez is a young woman trying to rescue herself.

Set in the late 1970s, Elena skips her college graduation to move to her grandmother’s cabin in Colorado to help a recent widower take care of his young children. Dealing with an unplanned pregnancy, she attempts to escape into her grandmother’s, Tuah, secluded little town. Uncertain of her future — career, graduate school, mother? — when she arrives at Tuah’s, she cocoons herself into an old family quilt. We learn of a mysterious, deadly fire Elena caused as a child that still wracks her with guilt. Tuah is a constant in Elena’s life — especially after her mother abandons her as a child. Cotts develops these characters with ease and compelling writing early on in the novel.

While I read this book, I thought about my own grief of losing my mother when I was twenty-four — maybe that’s why I felt so connected to Elena. This novel weaves together guilt, grief, uncertainty, love, loss, and forgiveness in it’s many forms. Losing my parents was the most difficult thing I ever faced as a young adult just starting out in the ‘real world.’ I spent a lot of time juggling emotions as who I thought I was was, torn apart in facing a new reality as an adult orphan. Ultimately, this is a novel about learning to love and forgive yourself; which I think we all struggle with at some point in our lives.

Elena, single and disenchanted with her career prospects after college, moves in with a family to take care of the young children for free. She believes Tuah’s little Colorado town offers solace as she considers her future, but starts to question herself and her past as she learns more about her family. As she takes care of the children, she becomes more and more attached to them — another instance that shakes her understanding of who she is.

Cotts’ writing is enticing and smooth — I haven’t read a novel that grabbed me like this in a really long time. Her themes are carefully woven as we see Elena learn that tragedy is not all encompassing pain and strife. Unexpected truths are exposed in the face of uncertainty and Elena transforms by gaining perspective, understanding, and forgiveness. Life is a balance no matter how you believe it’s parsed out: divine intervention, fate, the cosmos, karma, or pure chaos. It took me a long time to come to terms with that after my mother died and, two years later, my dad followed. I lost faith in who I was and what I believed faced with that unimaginable reality. But, like Elena, I’m changing and growing as I learn that life has more to offer than suffering — it can be absolutely, unexpectedly breathtaking. We just have to be open to life.

This novel is definitely getting shelved in my library as a beautiful work of fiction that grapples with the human struggle and the undying question of what life means. The pacing is well done and the ending ties loose ends as we follow Elena evolve. If you’re a fan of literary fiction with strong characters, themes of acceptance, absolution, and healing then Among the Lesser Gods is for you. And I’m fairly certain a lot of us will look forward to Cotts’ next novel.

Elena Alvarez is living a cursed life. From the deadly fire she accidentally set as a child, to her mother’s abandonment, and now to an unwanted pregnancy, she knows better than most that small actions can have terrible consequences. Driven to the high mountains surrounding Leadville, Colorado by her latest bad decision, she’s intent on putting off the future. Perhaps there she can just hide in her grandmother’s isolated cabin and wait for something—anything—to make her next choice for her.

Instead, she is confronted by reflections of her own troubles wherever she turns—the recent widower and his two children adrift in a changed world, Elena’s own mysterious family history, and the interwoven lives within the town itself. Bit by bit, Elena begins to question her understanding of cause and effect, reexamining the tragedies she’s held on to and the wounds she’s refused to let heal.

But when the children go missing, Elena’s fragile new peace is shattered. It’s only at the prospect of fresh loss and blame that she will discover the truth of the terrible burdens we take upon ourselves, the way tragedy and redemption are inevitably intertwined—and how curses can sometimes lead to blessings, however disguised.