Review: The Girl with the Lower Back Tattoo 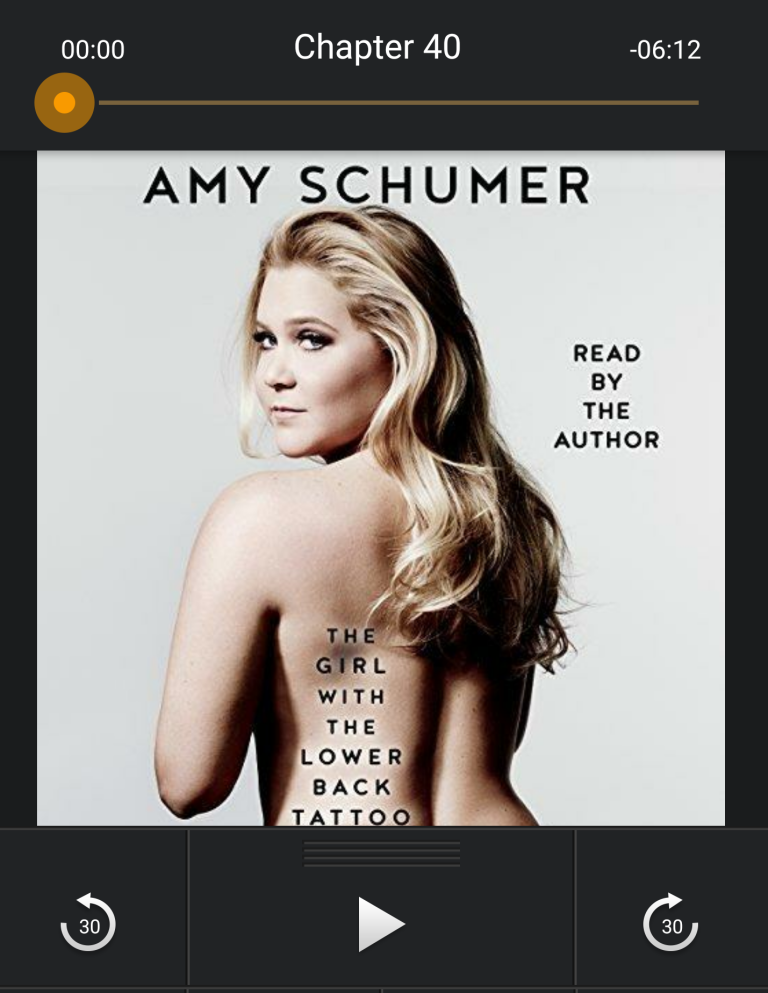 Amy Schumer is labeled a “sex comic” because she writes jokes that discuss sexual activity which, apparently, sets her apart from her male counterparts who frequently talk about sex. Like any woman in the spotlight, she’s had her fair share of criticism and praise. Personally, I enjoy Schumer’s comedy style and the thoughtful, clever, transgressive, feminist skits on her show Inside Amy Schumer. So her new book, The Girl with the Lower Back Tattoo, instantly made it onto my TBR list. I decided to purchase the audio book because I had a long drive to visit family up in Northern Wisconsin and there’s nothing that passes the time better than audio books (except maybe singing obnoxiously loud to all of my favorite songs, but I wanted to preserve my voice for my visit).

Amy’s book is no literary gift destined to claim a spot in the memoir canon – but it’s authentically Amy (at least it feels that way. I don’t know her personally unfortunately). She’s laying it all out there for us – dispelling the stereotype that she is her comedy. The ‘shocking’ sex, drunken, unabashed woman she portrays in her show or in her comedy specials possess her creativity, but she’s remarkably (gasp!) human in these pages. We learn about her life in vignettes, lists, excerpts of her diary with footnotes (which I really want to do sometime if I ever come across my old diaries), and reflection. We get a clear picture of who she is by expressing herself through memoir – choosing what to include or exclude with precision.

Some may be disappointed to learn that she’s not a blackout drunk every night of the week with a mass of notches in her bedpost – she’s an introvert. She’s a woman in society that depicts her as “fat” because she eats…as humans do…and a “slut” because she talks about sex (what a novel concept that women actually enjoy sex). We learn about her trying to fit in as an awkward pre-teen, a know-it-all twenty-something, and the unsettled realization that our parents are not immortal, infallible gods. Her stories are relatable – women all over the world struggle with similar challenges Schumer has faced. Perhaps her most heartfelt chapter discusses how she ‘lost’ her virginity when a boyfriend sexually assaulted her. She reflects on how she comforted him and the confusion, self-hatred, and reconstruction of the self that follows. She’s taking a risk, as any writer does, in sharing this with her readers – opening up dark, uncomfortable truths for us to see. That’s what I appreciate about this book.

If you saw Amy’s latest stand-up on Netflix, The Leather Special, a lot of the material she uses is in the book. I think because she spent so much time on the book, it’s understandable why she’d incorporate it in a different medium. But I could tell in her special that something was off; she didn’t have the same energy. It may have been the intense self-reflection required to write a memoir or, more likely in my opinion, she’s still shaken about what happened to two women who went to see her film Trainwreck. Mayci Breaux and Jillian Johnson were murdered in a Louisiana theatre by a mentally ill, misogynistic man with a gun who shouldn’t have had access to a firearm. This tragic event spurred her latest activism for gun legislation. I think for someone whose life and livelihood is to make people laugh, such a tragedy to occur connected to something she created is undoubtedly stressful and heartbreaking. She uses her book and her special as a platform for activism. As a celebrity, it’s something she can do to increase awareness of something she feels passionate about.

I relished listening to this book – on my drive I laughed, I cried (not safe – don’t cry and drive), I reflected on my own experiences. If you like Amy Schumer’s comedy and want to know more about her it’s definitely worth a read. There are some chapters that didn’t engage me as much, but overall I appreciated her perspective on life. She’s grown and learned from her experiences; something we should all practice now and then. It’s a story of regrets, remembrances, reflection and acceptance of who she is – similar to learning how live with a tattoo. I should know — I have five.

amy schumerhumorI would recommend this book to othersnonfiction
Share 0 FacebookTwitterPinterestEmail