Review: The Art of Racing in the Rain 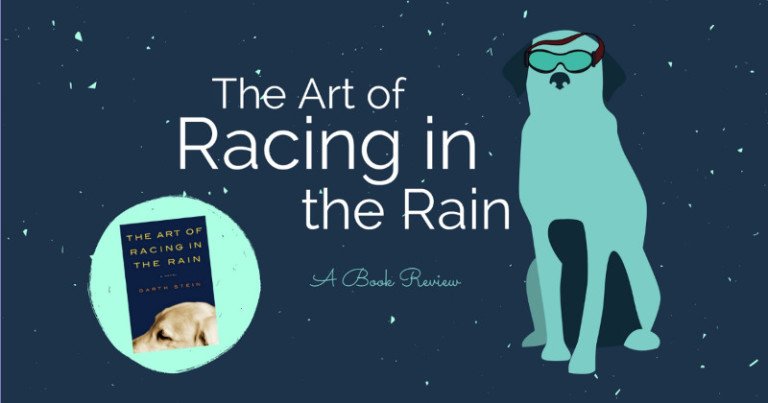 The Art of Racing in the Rain, by Garth Stein, was my book club’s January selection. It’s told from a dog’s perspective and is quite widely acclaimed, so I was excited to read it.

However, I have few good things to say about it. Before I get into my thoughts though, I want to issue a quick warning that this review contains a few spoilers. So turn back now if that’s not your thing!

This is a family tale, told from the perspective of the dog, Enzo. The story focuses on Denny, the father, who is a racecar driver with big dreams. Enzo is a terrier mix who loves racing and watching documentaries. Denny soon meets and marries a woman named Eve, and their daughter Zoe arrives shortly after that.

Everything is happy for the blink of an eye, but then Eve gets brain cancer and dies. Her parents bring an awful custody case against Denny, which includes false statutory rape charges, courtesy of Eve’s cousin.

I do want to say that this book was written well and I appreciate the unusual perspective. I also really liked the way Stein wove race advice into everyday life advice — the title is incredibly apropos. Some people have criticized the book for being too much about racing, but I think the whole thing is pretty balanced.

Nevertheless, there is MUCH I didn’t like about this book.

For starters, I didn’t find the dog perspective convincing. Dogs are much more sentient than most people give them credit for, yes. But you can’t ask a dog to bark twice to go faster and have the dog actually bark back. I also found it incongruous that Enzo was given full human intelligence yet used slightly off-norm language construction. We are all, of course, entitled to our own interpretation of a dog’s thoughts and level of human consciousness, but he just didn’t seem like a dog to me.

Enzo also narrated some events that he had no business narrating. There are certain limitations to having a canine narrator, such as not being allowed into the courtroom. Yet Enzo provided imaginings of this or happened to be on the steps outside. If you’re going to have a dog narrate, commit to the dog perspective.

Additionally, I have two major bones to pick (pun intended) with the plot of novel.

The first is the false rape case brought against Denny. Through an unfortunate weather event and extreme exhaustion, he ends up letting Eve’s teenage cousin spend the night at his house when no one else is there. She attempts to seduce him while he’s sleeping, which he wakes up and stops, but she later accuses him of raping her. While I get that this isn’t out of the realm of possibility, I think it perpetuates our society’s inclination to believe rape victims are lying. It made me very angry. What’s more, an adult man being unwittingly seduced by a young teenage girl feels a bit like a middle-aged man’s mid-life fantasy.

My other major complaint is that the dog dies. Here is a PSA for all authors out there considering adding a dog to the plot line: the dog doesn’t have to die for the story to be good. Seriously. And don’t worry, this isn’t even a spoiler because you find out in the beginning that Enzo is going to die at the end. So not only does the dog die, but you know that’s what the whole story is leading up to. Depressing AF.

So unless you’re made of nails or feel like crying every other chapter, I’d skip this one. The story is sad, the dog perspective doesn’t feel real, and I’ve already ruined the ending for you (sorry!).