Review: The Kind Worth Killing 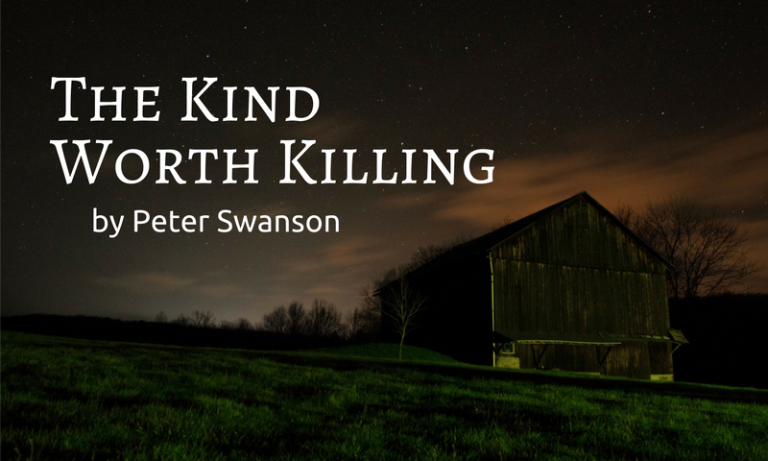 In December, I started going to Minneapolis’ Books and Bars. I probably don’t need to add another book club to my already busy schedule, but this one is just too much fun! Books and Bars takes book club discussion to a whole new level. Moderator Jeff Kamin gets the discussion going and then opens the discussion to participants, sometimes as many as 50 people. It’s a super fun way to hear what others think without the pressure of having to say something profound. If you live in the area, I highly recommend (Books and Bars also meets in St. Paul.). But anyway, on to the real reason you’re here: my review!

The Kind Worth Killing by Peter Swanson is Books and Bars’ January pick so I rented it from the library…and gobbled it up in five days. The story start with Ted meeting Lily on a plane. Ted’s just found out his wife is cheating on him and Lily offers to help him murder her. No spoilers here: this all happens within the first chapter. Swanson takes the reader on a thrilling, winding journey that doesn’t end quite how Ted, or Lily, expected.

I’ve read a lot of reviews that want to compare this to Girl on the Train and Gone Girl, which I guess I can understand. These comparisons always frustrate me though. The thread that seems to tie all these stories together are a woman as the main character who is untrustworthy. For me, that’s where the comparisons end. Lily is untrustworthy, not because of the way her story unfolds, but because of who she is at her core: a person who thinks that some people really do deserve to be murdered.

I will say you have to suspend a bit of disbelief for this story to work. Any story involving murder and trying to get away with it involves a bit of removing yourself from reality, but this had a few too many moments where I said Huh? The characters fell a bit flat at times, especially Ted’s wife and her lover. Both felt especially stereotypical as the gold-digging wife and the dumb construction worker who fell for her. But, all together the story just worked. It was thrilling, exciting, and each chapter ended in a cliffhanger, forcing me to keep reading.

I can’t reveal anything about the end, but it’s wholly unsatisfying, in a good way. It’s a final twist that I didn’t see coming, which was a fun way to end the book. I’ll be excited to see what others think of the book at my next Books and Bars event. Overall, this was a fun, thrilling read! 3.5/5.

[…] a weird coincidence. I had just finished Peter Swanson’s The Kind Worth Killing a day before I received his newest novel, Her Every Fear, in the mail from TLC Book Tours. I […]

[…] actually reviewed Peter Swanson’s debut novel, The Kind Worth Killing in January 2017, and it was one of my first introductions to both LQ and Swanson. So when I saw […]