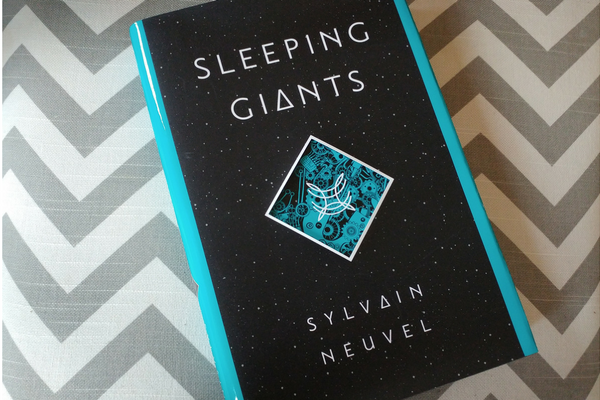 Let me preface this review by saying this: I am not exactly a science fiction girl. That doesn’t mean I dislike it – it’s just not something I read on a regular basis. So, when I saw this book in the lineup for Book of the Month a couple months ago, I thought “hey, maybe I should try something totally different!” The book sat on my shelf for a couple months while I made it through some book club reads and some others on my TBR. When I was looking for that always difficult-to-choose “what to read next,” I saw this and was overjoyed that I had something totally off my beaten path waiting for me. I was in the mood for something different, so I snatched it up and began reading.

First of all, I have to comment on just how gorgeous this book is! I took off the dust cover and was immediately enamored by the art on both the front and back covers. I have to admit, I let the art make me super amped up for how good the book would be. This is not always a sure bet…and unfortunately, what was inside didn’t quite live up to the art for me. 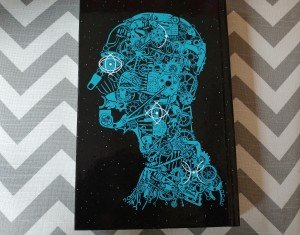 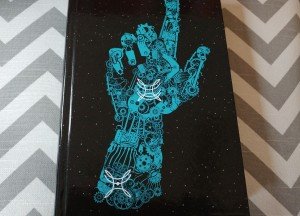 Sleeping Giants by Sylvain Neuvel is the first book of what will be a series. The full title is Sleeping Giants (Book One of the Themis Files). It was a good book, but after I got so excited about it, it just didn’t quite live up to my expectations.

The story begins with the finding of a mysterious, large metal hand in a hole, surrounded by panels with markings on them. These metal pieces have a mysterious bluish glow coming off of them. They’re found by a young girl in the woods when she falls into the hole. Cue the excitement for all the crazy alien mystery coming up in this book, right?

We jump into the future, and the rest of the story is told interview style. We have a main character (whose name we never learn) who is leading the project to study these metal pieces. The first interview is with Dr. Rose Franklin, the little girl that found the pieces and grew up to be a scientist. She’s now the lead scientist studying the mysterious, alien hand and panels.

Our story continues when a military pilot on a mission loses control of her helicopter (it just turns itself off) over Turkey. Where the helicopter goes down, another metal piece of something similar to the hand is found, but it’s not a hand…it’s a forearm. When brought near the hand, the two pieces pull toward each other and connect seamlessly. The search begins worldwide for more pieces of what would appear to be some sort of giant alien metal robot.

Eventually, they find all the pieces (with a couple mishaps along the way that cause death and destruction and must be covered up), and a giant alien robot is created. It has a pod in the chest, where two “pilots” are recruited to learn how to make the thing work, plus a linguist to try to puzzle out the markings on the panels that probably explain what it is and how to drive it.

I don’t want to delve too much further into the plot, because heck, you might want to read it! For me, though, there was just way too much politics and not enough aliens. After getting super excited about this sci-fi novel, it just…wasn’t sci-fi enough! The interview style writing was interesting, but I thought it didn’t allow for the greatest storytelling. I just spent the whole time wanting something more to happen. Yes, there was drama. Yes, there were some small pieces of alien-type story pieces. A lot of it, though, was how the human world was dealing politically with this crazy alien robot weapon that could probably take out a whole country on its own.

For what it is, this book is good. The interviewer is conniving in hilarious “oh no you didn’t!” kind of ways. I mean, the guy is brilliant at manipulating the situation for his personal benefit. For what I was expecting, though, this book was a let-down. Therefore, I’m not really sure it’s fair for me to rate it poorly, but for me it just fell flat. It had so much more potential. I’m giving it 2.5 out of 5 stars.

I had the same reaction to this book. I also got it through book of the month and was so excited to read it! Such a let down, though. I was expecting a much more interesting story.

Ah exactly!! Glad I’m not alone in my reaction :] My thirst for expanding my horizons with sci-fi was not quenched by this one.