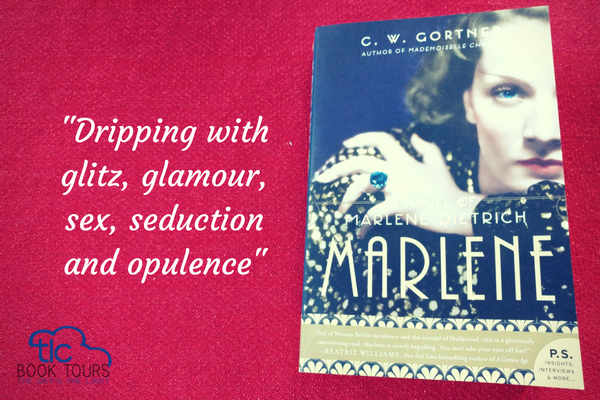 Need a read that’ll immerse you in a life that’s completely different from your own? Pick up Marlene and that’s what you’ll get! Thanks to TLC Book Tours and HarperCollins for sending me Marlene in exchange for a fair review.

This one was definitely outside my normal comfort zone, and that’s part of what drew me to it. Here’s some of the plot summary I read when I picked it out:

From the cabarets of Weimar Berlin to the dazzling film studios of Hollywood’s golden age, an enthralling novel of a glamorous legend Maria Magdalena Dietrich was born for a life on the stage. Raised in genteel poverty after the First World War, the willful teenager vows to become an actress and singer, trading her family’s proper, middle-class society for the free-spirited decadence of Weimar Berlin’s cabarets and drag balls. With her sultry beauty, smoky voice, and androgynous tailored suits, Marlene performs to packed houses—and becomes entangled in a series of stormy love affairs that push the boundaries of social convention—until she finds overnight success in her breakthrough film role as the cabaret singer Lola-Lola in The Blue Angel.

This book is dripping with glitz, glamour, sex, seduction and opulence. Under all that, though, is family, modern love, and war. The plot follows Marlene Dietrich (a real actress born in 1901) as she goes from awkward pre-teen (with a crush on a female teacher) to world-famous actress.

Marlene was super entertaining. I found myself getting really wrapped up in what was going to happen next in her life. The book is separated into acts and chapters. Each act is a number of years in Marlene’s life, and the book encompasses much of her life. Born and raised in Germany, World War II plays a significant role in the lives of Marlene and her family members and friends.

I really haven’t read a book like this one before, and I admit that I really liked the glitz and glamour. The story was enthralling and the characters were well done, but I did think that the book started to get really quite long around halfway through. Smooshing such an interesting life into 400 pages is no doubt a challenge, and I think Gortner did what he could to put all of the facts from Marlene’s life into a tantalizing story. However, I just started to feel like there was far too much crammed into this story. It was a ridiculously ambitious attempt at capturing Marlene’s entire life into one book, and it was really enjoyable, but the huge cast of characters and Marlene’s entire life was too huge of an undertaking for one novel, in my opinion.

I’d still recommend this book when you want something super sultry and entertaining. but I’m willing to bet you’ll start feeling the same way I did at around half to three quarters of the way through. It just gets a little bit bloated. I’m giving it a solid 3 stars.