Review: Here I Am 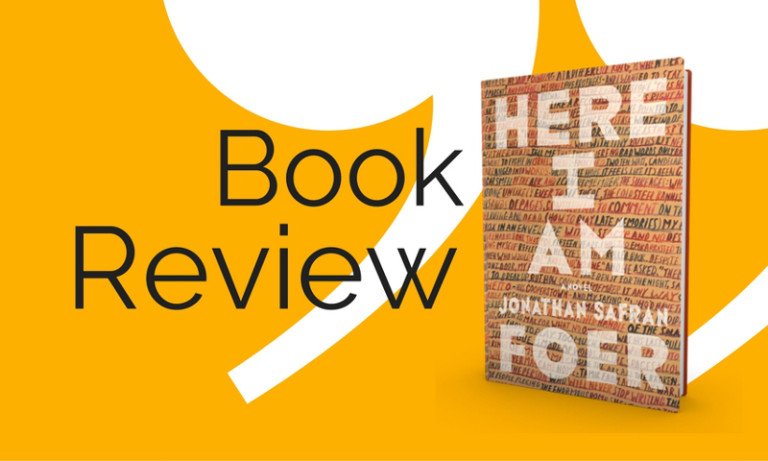 Jonathan Safran Foer is perhaps best known for writing Extremely Loud and Incredibly Close. I haven’t yet read it, but I have several friends who loved it and Foer came highly recommended.

A friend suggested his new novel, Here I Am, as our book club’s monthly selection.

The story is about the Bloch family, which consists of Jacob, Julia and their sons Sam, Max, and Benjy. Jacob writes for a TV show but has secretly been writing his own show for years, while Julia is an architect who has never built anything. They live in Washington D.C., are overly reliant on electronic devices, and are religious but not. They are a typical American family. They are us.

We meet other members of their extended family as well, including Jacob’s Israeli cousins. They come to visit the Blochs, sharply illustrating the contrast between American and Israeli Jews.

Plot-wise, the novel is quite complicated.

At the center, Julia and Jacob’s marriage is unraveling. Around that, they’re preparing for their son’s bar mitzvah, contemplating affairs, there is a massive earthquake in Israel, a death occurs in the family, war breaks out in the Middle East, the family dog is aging, and various events happen to the kids.

The story mostly focuses on Jacob, but briefly follows a few other characters as well. And on top of all that, the narration jumps from the present to the past to the future to the Middle East to the family home to commentary on the war and back again. It’s told via narration, texts, video game transcripts, news broadcasts, speeches, and more. The sentences are long and rambling.

I’ve never read a book quite like this. The writing is rich, colorful, incredibly detailed, and thought-provoking. It resonates. Yet it’s also really disjointed and I’m not sure that it all ties together very well.

The novel is mostly about the dissolution of a marriage, which isn’t affected much by the Middle Eastern crises, being Jewish, or the other family members. It mostly feels like a commentary on marriage — which I can appreciate — but it doesn’t seem necessary to surround this conversation with the huge events going on in the book. And the characters remain unchanged, despite living through major life events.

However, the book is smart and the observations are sharp. On marriage:

“So many days in their shared life. So many experiences. How had they managed to spend the previous sixteen years unlearning each other? How had all the presence summed to disappearance?”

Overall, the book is extremely chaotic. Yet Foer touches on so many themes that all of us can relate to some part of this book and see ourselves in the characters.

Have you ever wondered if you really know your spouse or partner? Can you lose yourself in marriage? At what point in life will your history or religion affect you? How will you handle aging, grief, and the prospect of death? What does it mean to be Jewish in America? In Israel?

Here I Am is puzzling, rambling, and immense. I give it 3 stars. I loved how specific and thought-provoking it was. But I didn’t love its overly complex style or unnecessarily huge plot points.

I listened to this as an audiobook read by Ari Fliakos. His narration is well done, and the specific voices given to characters made me laugh out loud. Irv, Jacob’s father, is brought to life especially well.

Excellent review, Aubs! It makes me interested in the book, but wondering if the author is in stage of development and could put it together better in terms of what you described! Thanks for sharing, Gram