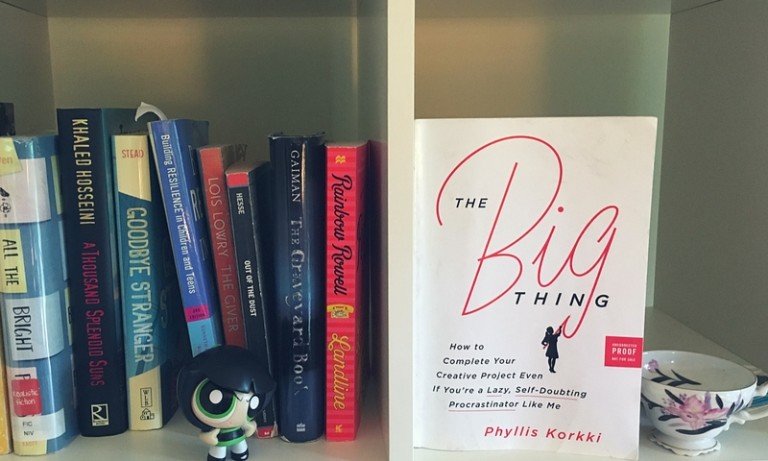 Boy, am I ever familiar with the concept of the Big Thing.  It’s the project that alternately exhilarates and paralyzes. It’s the sort-of crazy ambitious idea that requires willpower, courage, accountability, AND is ideally embarked upon for “The Right Reasons.”

My life is kind of a series of Big Things.  I can’t really recommend this approach, and I’m not sure I’m always spurred by those “right reasons,” but I do tend to measure my value in projects completed: the marathons and triathlons, the master’s degree, the conference presentations, the massive curricular endeavors, the stages of child (parent) development, and now, my partially-drafted novel.

My natural inclination toward the daunting is why I jumped at the chance to review Phyllis Korkki’s self-help meta-book, The Big Thing: How to Complete Your Creative Project Even If You’re a Lazy, Self-Doubting Procrasinator Like Me.  Although I was initially wary of the subtitle (I don’t identify as lazy or regularly self-doubting), I’m so, so glad I picked this book.

Korkki documents the completion her own Big Thing – writing the very book I’m now reviewing. It’s a pragmatist’s Big Magic, offering both permission to nurture a creative dream and functional advice on how to make tangible progress. Korkki catalogues the barriers to her own creativity and offers work-arounds in straight-forward, relatable, and occasionally laugh-out-loud prose.  It’s charming, helpful, and hopeful.  It’s also well-researched, which sets it apart from the other books about creativity I’ve read.

Korkki begins with the importance of a deadline – how can we apply “a sense of urgency” to our creative work? Each chapter,then, offers a new frame through which to view one’s project, with the goal of elevating its priority. Her exploration takes her on a treacherous mountain hike, into a therapist’s chair, under the hands of a posture coach, and into an accountability partnership with a dairy farmer.

Korkki’s project inches toward completion, even though she feels a little bit tortured by it.  The incremental aspect of the work becomes a theme in the book, and one that resonates with me. She quotes ergonomics expert Alan Hedge who advises “baby steps and routine.”  Korkki summarizes, “Realize that a hundred words here and a hundred there will add up over time. And try to set up a regular time and place to write them.” Later, Korkki recommends “trust in the power of increments, no matter how erratically they accrue.” I loved that, and I’m keeping it in mind as I navigate other pitfalls that Korkki explores, including the limits of the day job, the family life, and the length of time it will take to finish a Big, Big Thing.

In addition to appreciating the incremental, Korkki preaches enjoyment of the process. If the work is too miserable, unrealistic, or simply doesn’t fit into your existing life, the Big Thing might not be the right project for you.  In those cases, Korkki offers permission to give up and search for another, more rewarding task OR to accept that your daily life is your Big Thing. That’s okay, too. I mean, it’s not okay for me, but sometimes I wish it were.  Korkki would probably understand that, I think, and that’s an idea I find comforting.

You’ll Like It If: You’ve worked on a Big Thing and want to feel validated and less alone.

Maybe Not So Much If: Self-help just doesn’t appeal.

Many Thanks to: TLC Book Tours for sending me this book and including me in their Big Thing! You can check out other bloggers’ thoughts on Korkki’s work by clicking on the tour schedule HERE.

” In those cases, Korkki offers permission to give up and search for another, more rewarding task OR to accept that your daily life is your Big Thing.” I think this is such an important thing for a person to discover. WHY are you doing your Big Thing and is it what you SHOULD be doing are excellent questions to ask.

Heather, Thanks so much for having me! And thanks for the comment. I felt like Korkki honored the daily life as Big Thing – parenting, friendship, marriage – these all “count.”