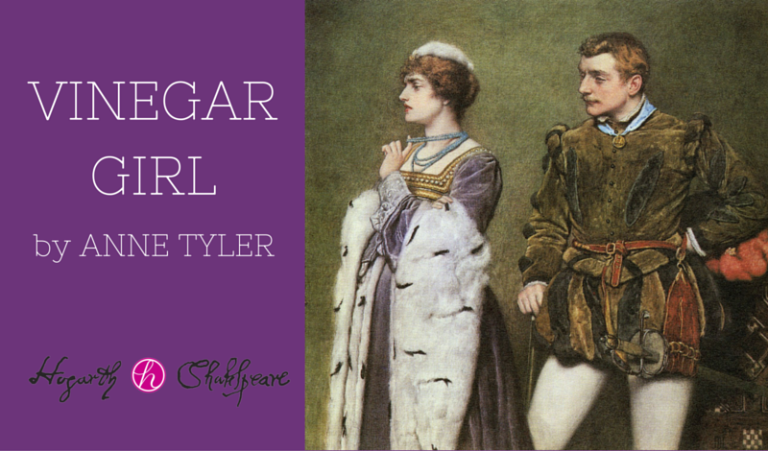 Vinegar Girl is a part of the Hogarth Shakespeare project, and it’s based on The Taming of the Shrew, which happens to be one of my favorite Shakespeare plays! So, when I downloaded this book via NetGalley, I was really excited to dig in. I haven’t read any other Ann Tyler novels, so I wasn’t sure what to expect.

Unfortunately, it’s not at all what I expected.

In Vinegar Girl, our main character, Kate, is pressured to marry her father’s research assistant so that he’ll be able to stay in the country and continue working on an important research project. In the play, the main character is smart, witty and strong-willed. She has a sharp tongue and isn’t afraid to speak her mind. Kate, on the other hand, just fell completely flat for me. She resists the marriage at first, then becomes a total pushover.

In the play, there’s so much wit, so many playful jokes and comments, and it’s so fun to watch. Vinegar Girl had some wit and jokes, which I appreciated, but not nearly enough. The main character of the play, Katherina, does become “tamed” via reverse psychology by her fiancé/husband, but it takes a lot longer than it does in the book, and is just much more witty and funny. I really missed that sharp dynamic between the two characters – I couldn’t find it much at all in the book.

I realize that it must have been really difficult to turn something such as Shakespeare into a novel – you can’t really take many creative liberties with how things happen! It does follow the same plot line as the play, but it’s so short, maybe that’s one of the reasons why it didn’t work for me.

Have you seen 10 Things I Hate About You? That movie is based loosely on The Taming of the Shrew, and it was great! It’s a bit looser, though, so I’m sure it was easier to write, being able to take more creative liberties. Perhaps that’s what Tyler should have done with this, though – that certainly may have made it better for me.

One positive thing I’ll say is that, as my first Anne Tyler read, I was really fond of how she describes ordinary life and mundane moments with such perfection. That’s something you don’t see in a lot of novels! It was enough to make me feel like I should read another of her books, even though I didn’t enjoy this one so much.

Anyway, I don’t have a whole lot more to say about this one – I was just rather disappointed. I think it had so much potential, but didn’t live up to what it could have been. 2 stars.