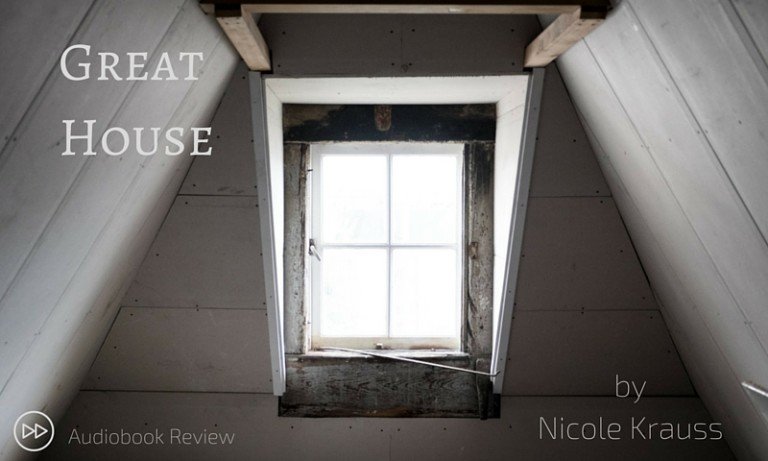 Ten or so years ago, I completely lost myself in a novel called The History of Love by Nicole Krauss. I don’t remember many of the novel’s details – it’s the intersecting stories of people connected to a work of fiction, also called The History of Love – but I remember my utter astonishment when the narrative threads converged near the ending. Krauss has skills – plotting, impeccable sentence structure, character development – it’s all there.

I’ve been meaning to read Great House for years now, and finally, I checked the audiobook out from the library via One Click Digital.

The Story: Great House relies on the same structure as Love – a series of intersecting stories narrated by five different flawed and curious characters. We begin with a novelist, Nadia, who has composed each of her works at a large and heavy desk. She initially borrows the desk from a Chilean poet to whom she finds herself magnetically attracted to during their one encounter. When Varsky, the poet, disappears at the hands of Pinochet’s secret police, Nadia becomes the de-facto owner of the behemoth until a young woman, presumably Varsky’s daughter, ships it to Jerusalem. Nadia’s creative life withers, and she becomes desperate to return to the proximity of the desk. After the first act of Nadia’s story concludes, we meet a grieving father in Israel who strives to understand and reconcile with his brooding and mysterious son; a young woman who falls in love with a man who remains held emotionally captive by his imposing father; and a husband who discovers a terrible secret about his wife only after she’s succumbed to dementia. Finally, we have a short vignette of a man who reclaims furniture stolen by the Nazis during WWII, thus restoring the memories of the survivors, if not healing their traumas. All of the narrators’ stories connect, at least tangentially, to the weighty and sometimes malignant desk.

The Writing: There’s no question that Krauss is terribly talented. Her sentences enchanted and enveloped me. You can’t put Great House in the background – it’s as commanding as the desk. Really, this is a book to be read twice, once to get the gist and marvel at the Krauss’s skill, and a second time to reconstruct the narratives more clearly. It’s not at all an easy read.

The Recording: We have five narrators, one for each of the characters.  My favorite is George Guidall, who reads the sections narrated by Aaron, the Israeli man who tries to reconcile with his estranged son.  The only actor who distracted me, just a bit!, from the story was Alma Cuervo, who voices Nadia, the first desk-owner we meet. Overall, the quality of performance is high, not at all a barrier to delving into this complicated work.

The Bottom Line: Great House reverberates with emotion.  You’ll find yourself immersed in symbolism and a kind of mysticism.  It’s serious and layered.  So, if you’re looking for a fun summer read with lighthearted moments, this is not your book.  If you’re looking to brush up your English major chops by reading a preeminent contemporary American author, this is perfect.  Although, I’d go with Krauss’s History of Love first, if you haven’t already devoured it.

What do you think? And, what are some “serious” novels that pack a big pay-off for the reader?  I’d love to hear your thoughts.