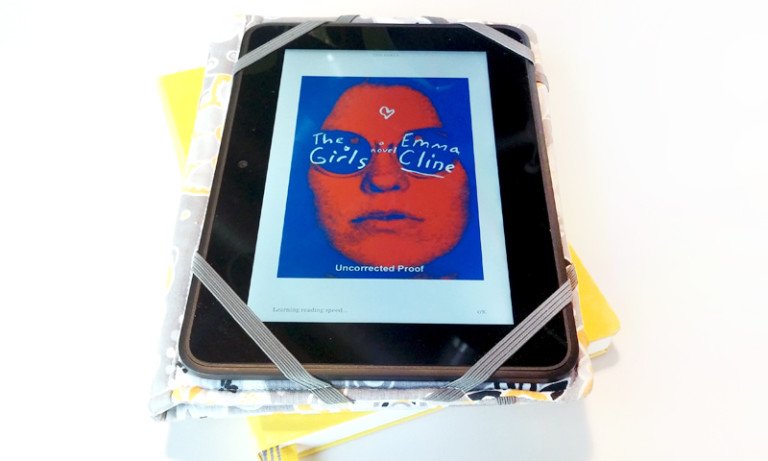 Listen up, bookish friends: This is one to add to your TBR list. This coming-of-age story is captivating, haunting, and just so real. Cline is a genius at delving into the mind of a young teen in search of recognition and self. Of the coming-of-age books I’ve read, I’d have to put this one up near the top.

Thanks to Random House and NetGalley for providing me with a review copy of The Girls.

The Girls is the story of Evie, a young teen growing up in California. Her family has inherited money from her famous actress grandmother, so they’re never lacking. Her parents get divorced, but beyond that she lives a run-of-the mill adolescent life, until the summer before she’s to head off to boarding school (1969), when she meets some girls.

The girls are digging in a dumpster when Evie first sees them, and yet she’s immediately drawn to and enthralled with the girl who appears to be the leader of the group. The girl, Suzanne, has beautiful, long black hair, and a commanding presence that Evie looks up to in only the way that an adolescent girl can look up to an older one. After seeing each other around town a couple times, Suzanne and the other girls bring Evie to their home, which is a hippie commune (called the ranch) in the country nearby.

The ranch is lead by Russel, a man with a much more psychological presence than a physical one. He’s smaller in stature but convinces the men and women living with him that free love is the way to live. The group scavenges for food and experiments with sex and drugs. Throughout Evie’s experimentation and delinquency, you’re in her head, listening to her sometimes misguided, yet sometimes all too real thoughts about becoming an individual.

The book jumps back and forth through time, from Evie as an adult to Evie as an adolescent. As an adult, it’s clear that she’s a lonely woman with little self confidence and holds onto an event in her past she can’t forget.

This book examines what it’s like to be a young teen girl in a way I’ve never seen done so well. Cline masters the awkwardness, the need to be wanted, the struggle to belong, the blossoming of sexuality, the ability to see parents as humans with flaws, and the idolization of those who seem outwardly to have it all. She so expertly delves into how thoughts and ideas and emotions shape Evie as she searches for herself. Some of these thoughts are so deeply painful, yet so beautiful to read:

“Even possessing that small amount of money tindered an obsessive need in me, a desire to see how much I was worth. The equation excited me. You could be pretty, you could be wanted, and that could make you valuable.”

“I wanted to be told what was good about me. I wondered later if this was why there were so many more women than men at the ranch. All that time I had spent readying myself, the articles that taught me life was really just a waiting room until someone noticed you – the boys had spent that time becoming themselves.”

I lost myself in this book. I connected on a visceral level to parts of Evie’s experience, having been an adolescent girl myself. My thoughts, of course, were never as profound as Cline’s artful (and sometimes disturbing) portraits of what’s going on in Evie’s mind. Even in the adult Evie chapters, there are passages like this one:

“She was lost in that deep and certain sense that there was nothing beyond her own experience. As if there were only one way things could go, the years leading you down a corridor to the room where your inevitable self waited – embryonic, ready to be revealed. How sad it was to realize that sometimes you never got there. That sometimes you lived a whole life skittering across the surface as the years passed, unblessed.”

It’s clear from the beginning of this book that the story is moving toward something sinister: something bloody and murderous. You get more hints along the way about what it is that might be coming, and I got more and more anxious about how it was going to end. My only criticism of this book is that, about three quarters of the way through, there were so many hints as to what was coming that I started to think alright already, I get it, something bad is coming, let’s just get to it!

In the scheme of things, however, my criticism is tiny in comparison to my praise of The Girls. It’s a gripping coming-of-age story that I will definitely recommend to friends, and to all of you who’ve made it to the end of this review. 4 stars.

The Girls comes out on June 14th.

I LOVE coming of age stories and unfortunately, I just haven’t read that many that feature young women. Excited to add this to my list!

Ooo you should read it, this one would be really fun to chat about 😀 I really liked it!!