The Taliban Shuffle by Kim Barker 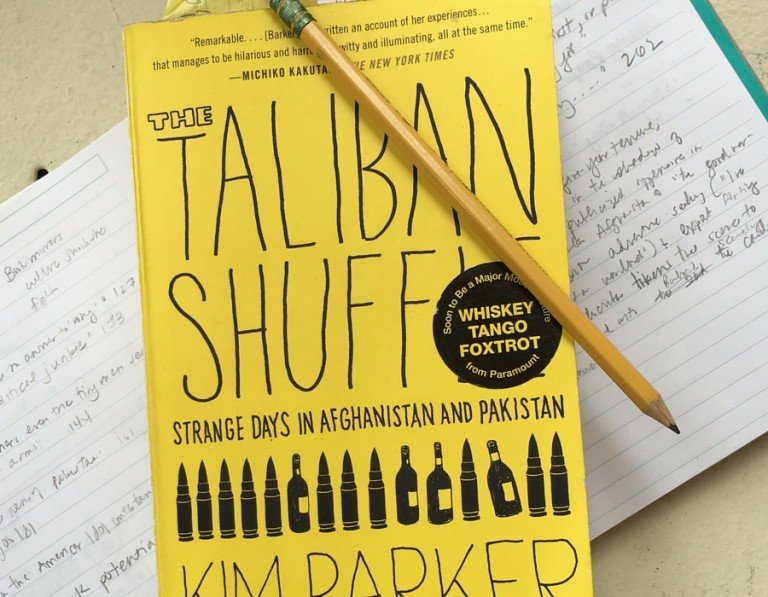 Kim Barker details the behind-the-bylines reality of war-zone reporting in her memoir, The Taliban Shuffle: Strange Days in Afghanistan and Pakistan.  The book was released to little fanfare in 2011, but reached the bestseller list this year as Tina Fey starred in Whiskey Tango Foxtrot, the movie adaptation.  The book is at once ridiculous – think: Bridget Jones-takes-Kabul – and poignant, an epistle on the failures of the global war on terror.

Barker arrives in Afghanistan in 2003, swashbuckling through Kabul as a foreign correspondent for the Chicago Tribune.  In the early days of her five-year tenure, Afghanistan languished in the shadow of more organized and publicized offensives in Iraq.  Barker describes Afghanistan, by contrast, as “the good war,” and busies herself with adventure-seeking (the first line of the book is, “I had always wanted to meet a warlord”) and uncomfortable expat flirting.  One of her journalist flings ingratiates himself to Barker by giving her a heads up about a recent suicide attack.

Gross, I thought to myself. Mass murder as pillow talk?

In fact, over the first half of the memoir, I cultivated an itchy dislike for Barker. Her personal annoyance and inconvenience against a backdrop of tragedy and death in the Middle East seemed crass.  I cringed as she donned a burqa to travel in Kandahar. “Oppressive,” she thinks. “But oddly liberating.”  Really, Kim? I frowned. After one burqa-wearing experience, you understand the gender politics of conservative Islam? The whole thing felt like Western ideals and stereotypes blanketed over the real lives of millions of Afghans.

But as the years in Taliban Shuffle tick by – 2003 becomes 2006 – I came to realize that the structure of Barker’s work mirrored her own culture shock and assimilation. Later, Barker interrogates her propensity for thrill seeking and her role as a voyeur, of sorts, in a world she can’t make sense of. In short, she’s as hard on herself as I had been on her.

Barker skillfully led me to a  turning point as she covers a gruesome attack in Karachi at the time of Benazir Bhutto’s return to Pakistan.  “Looking back,” Barker writes, “if my adrenaline addiction had a rock bottom, this was it – wiping my bloody hand on my pants, scrubbing the blood of strangers off my shoes, pushing away the tears so I could write a story.”

In the end, Barker provides a complex picture of life and work in Afghanistan, a country she clearly loves. In addition, The Taliban Shuffle is the story of one woman’s dedication to her craft in an arena dominated by men.  In the end, I liked this. And, for what it’s worth, I came to like Kim Barker, too.

You’ll like it if: You’re a news junkie who seeks the little-known backstory or the elusive exclusive.

Maybe not so much if: History and current events aren’t your bag.

Thanks for the honest review! I wanted to pick this up after seeing a trailer for the movie, but hesitated when I saw some mediocre ratings for the book online. Knowing that you ended up appreciating her storytelling method by the end makes me want to give it a shot.

Have you seen the movie yet?

Rachel, I haven’t seen the movie yet! To be honest, I had the same feeling of distaste when I saw the trailer as when I started the book – Tina Fey? War movie? But, now I get it, and I’m interested in seeing it. A colleague lent me the book and enjoyed it, which is why I stuck with it. I’m glad I did!