Review: The Ocean at the End of the Lane 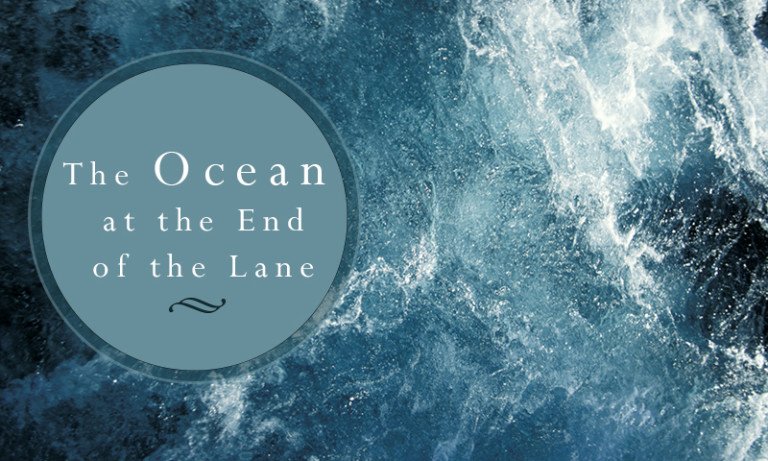 There are some books that should just be read aloud. That’s how we’re meant to hear stories — it’s etched into our linguistic history since we first tried to explain the phenomena around us with elaborate stories of gods, goddesses, and magic. Neil Gaiman is one of those authors whose books should be read aloud so you can taste his prose. The Ocean at the End of the Lane was read to me by my boyfriend (I know it sounds silly, but having someone read to you is actually rather calming). The nameless main character is a middle aged man revisiting his old neighborhood after a death in the family. He stops by the pond at the end of the Lane to sit and reminisce of the magnanimous experience he had there long ago. He recalls his lonely, but imaginative childhood when he was seven years old and encountered a young girl which led him on a surreal adventure do a duck pond…or the ocean at the end of the Lane.

I always enjoy Gaiman’s work — his writing style, regardless of intended audience, is captivating. This novel, his first adult novel to be released in years, is no exception. I was enthralled by the simple perspective of a child, especially the little things we don’t notice or at least vocalize as adults — how the milk tasted on his tongue or the feeling of wet clothes clinging to his body. The chapters start almost choppy as the main character exercises his memory:

Lettie Hempstock is a mysterious eleven year old girl who seems wise beyond her years and seems unbothered by supernatural beings. The main character gravitates towards her and when strange things start to happen — he coughs up a coin — he goes to her for answers. Here is where the story starts to twist down a rabbit hole of oddities and terrifying encounters (for a seven year old). I can’t really go into all that he encounters (that’s the trouble for me when listening to books; it’s harder for me to recall these things), but it made me feel like a child. I remember when I was little I conjured up an elaborate story of a ghost train whenever I heard the very real train go past my house. It’s that type of exhilarating youthful imagination that captures your attention in this novel.

That being said, I’m in no doubt of Neil Gaiman and his exceptional imagination so some of the creatures he creates and how he describes them would give children (and some adults) nightmares. The themes — memory, fear, mortality, time, and the supernatural — all linger with you throughout the novel. For a supernatural novel, I was able to relate with the characters emotions and trials. Even the description of the antagonist — the evil nanny, Ursula Monkton — is dripping with eerie imagery that only a child could seemingly fit together:

I thought I was looking at a building at first: that it was some kind of tent, as high as a country church, made of gray and pink canvas that flapped in the gusts of storm wind, in that orange sky: a lopsided canvas structure aged by weather and ripped by time. […] Its face was ragged, and its eyes were deep holes in the fabric. There was nothing behind it, just a gray canvas mask, huger than I could have imagined, all ripped and torn, blowing in the gusts of storm wind.

So Lettie and our hero set off to save the narrator’s family from Ursula’s evil ways that only Lettie and her family know how to banish. The surreal details of the events they encounter as they try to get rid of Ursula are too numerous and too intriguing to spoil here (and I honestly wouldn’t do it justice). The story continues to twist and wind to the climax where our narrator is pushed to his limits. It tangles reality and fantasy so well I’m not sure if this entire story is just the imagination of the narrator or if all these supernatural things actually happened to him. And that’s how Gaiman ends the tale; with a lot of unanswered questions.

Truthfully, though, I wasn’t bothered by that. I think that speaks to the literary talents of the author. It ended and I was left confused, curious, and wanting more yet I was also satisfied by the story itself — it was so engrossing. If you have a soft spot for Gaiman’s dark imaginings, definitely give this book a go. It’s lyrical, smart, funny, heartbreaking, and brilliant. And if you have a volunteer, try to get someone to read it to you (or get the audio book or read to your pets).