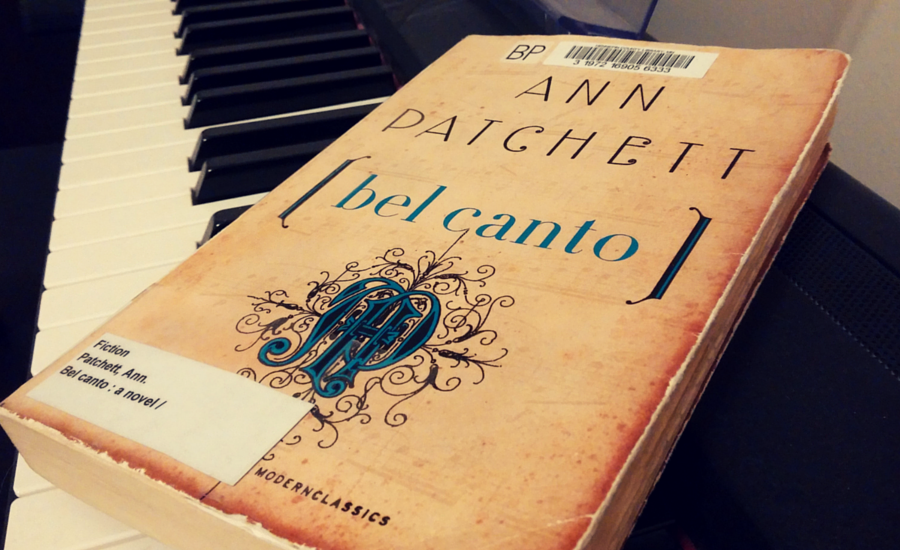 Bel Canto is a story about love, mostly. Love, music, language, terrorism, friendship – the book definitely doesn’t fail to deliver on those themes.

Set in South America, the story (based on a true story) begins when a large roomful of mostly affluent bureaucrats and CEO’s are taken hostage by terrorists during a beautiful soprano opera performance by the book’s female lead, Roxanne Coss. From there, the story stays in that same setting. The hostages end up being held captive for over 4 months! During that time, relationships are formed between hostages and terrorists, friendships grow, romances flourish.

It’s going to be very difficult to review this book without giving away the ending, but I’m going to try valiantly!

I have to admit, I was a little disappointed by this book. I had read and heard a lot of good things about it, so my expectations were high. There were definitely good parts! I enjoyed many passages about love and language and music. Patchett really has a flourish for colorful language on those subjects! For instance, here’s a passage about music I particularly enjoyed:

How strange his fingers felt after two weeks of not playing, as if the skin he wore now was entirely new. He could hear the softest click of his fingernails, two weeks too long, as he touched the keys. The felt-covered hammers tapped the strings gently at first, and the music, even for those who had never heard the piece before, was like a memory. From all over the house, terrorist and hostage alike turned and listened and felt a great easing in their chests….Had the accompanist played so well? It would have been impossible to remember, his talent was to be invisible, to life the soprano up, but now the people in the living room of the vice-presidential mansion listened to Kato with hunger and nothing in their lives had ever fed them so well.

Isn’t that beautiful? It’s passages like that one that saved this book for me. Because of how well-written it is and how beautiful the language is, I have to give it 3 stars.

As for the story, though, that’s…another story. I felt like I was reading a bizarre psychological/sociological experiment. Living for so long in this house causes the hostages (all men except Roxanne and a couple of the terrorists) to basically choose how they’re going to live this “new” life. They discover hidden/closeted passions, they realize they maybe love their wives more or less than they thought, and they basically all fall in love with Roxanne Coss, the soprano. Her voice and her music touches them all in a way that makes them feel such passion, and of course they all think that passion is for her.

Thoughts I had while reading this book:

“Are they really never going to leave the house in this entire book???”

“Um, I’m 5 pages from the end and there’s no ending yet. No resolution? I’m so confused.”

“I don’t understand the point of this epilogue at all…wow I’m confused.”

Yep, that about sums up how I felt about this book. The story was a bit odd for me – even boring at times. Also, I hated the ending! The resolution happens in 2 pages. I understand that this book was based off of a real event, so Patchett had to end the story in the way that she did. However, it felt really rushed and strange ending it in the last 2 pages of the book. There’s all this wonderful language and character development, and then it just…ends. At any rate, this book…it’s worth a read if you’re curious, but it definitely wasn’t a favorite of mine.

I would love to read just a stream of consciousness review from you sometime, it would be hilarious.

[…] which so far is ok — I loved Commonwealth more, though. (Side note: Joli reviewed Bel Canto here.) I’ve also added Hillbilly Elegy, by J.D. Vance, and It’s Okay to Laugh, by Nora […]

I just finished this one, and I had the same thoughts you did! Lovely writing by an amazing author, but the story just didn’t do it for me. I didn’t find myself interested in the story or characters, despite the great writing. I also disliked the ending and how it switched perspective so much in the first half. Definitely didn’t love this one like I loved Commonwealth!