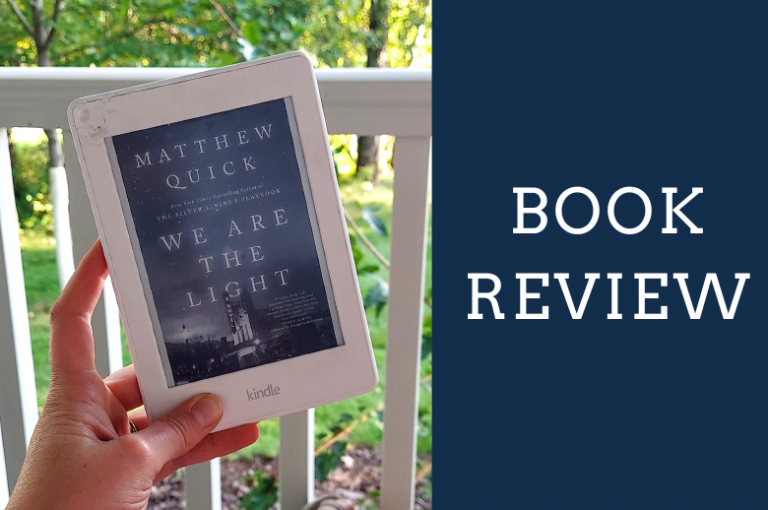 Looking for something outside of what you normally read? We Are the Light was different, heartfelt, and will definitely make you feel some feelings.

Lucas Goodgame lives in Majestic, Pennsylvania, a quaint suburb that has been torn apart by a recent tragedy. Everyone in Majestic sees Lucas as a hero—everyone, that is, except Lucas himself. Insisting that his deceased wife, Darcy, visits him every night in the form of an angel, Lucas spends his time writing letters to his former Jungian analyst, Karl. It is only when Eli, an eighteen-year-old young man whom the community has ostracized, begins camping out in Lucas’s backyard that an unlikely alliance takes shape and the two embark on a journey to heal their neighbors and, most important, themselves.

From Matthew Quick, the New York Times bestselling author of The Silver Linings Playbook, We Are the Light is an unforgettable novel about the quicksand of grief and the daily miracle of love. The humorous, soul-baring story of Lucas Goodgame offers an antidote to toxic masculinity and celebrates the healing power of art. In this tale that will stay with you long after the final page is turned, Quick reminds us that guardian angels are all around us—sometimes in the forms we least expect.

The community of Majestic has experienced a tragedy, and the whole town is affected – especially the people with loved ones who perished in the tragedy.

In short, there’s been a shooting in a movie theater, and Lucas’s wife was shot and killed. The whole book is told in letters after the tragedy that Lucas writes to his therapist, who doesn’t answer any of the letters. So, it’s a narrative from a man in a deep depression who’s seeing his wife appearing to him as an angel.

The best part of this book is Lucas’s relationship with Eli. They’re two people who clearly need camaraderie and somewhere to put their weird grief energy (which really is a real grief thing).

The grief and mental health stuff in this book was really well done, which I definitely expected from the author of The Silver Linings Playbook. Quick has a way of getting so deeply into the minds of his characters, and somehow conveying the complexity of their emotion to the reader.

I’m not sure how far I want to go into what happened in this book, because it could be spoiled pretty easily. What I will say is that I really appreciated the way the author was able to use a rather unreliable narrator to help show how utterly confusing grief is, and how it can completely change a person.

The only thing that really sticks out that I didn’t love about We Are the Light is the emphasis on Jungian analysis. The therapist Lucas is writing to the whole time is his “Jungian analysist” and he goes a little bit too far into Jungian philosophy for me. It was just mentioned so many times, it started taking me out of the story and was distracting.

All-in-all, though, this really was a good book, and I loved how it ended. It takes such tragedy and gives you a glimpse of all the humanity in it, and shows how it’s possible for humans go on when nothing is right.

For something similar that I loved, see No Hiding in Boise.