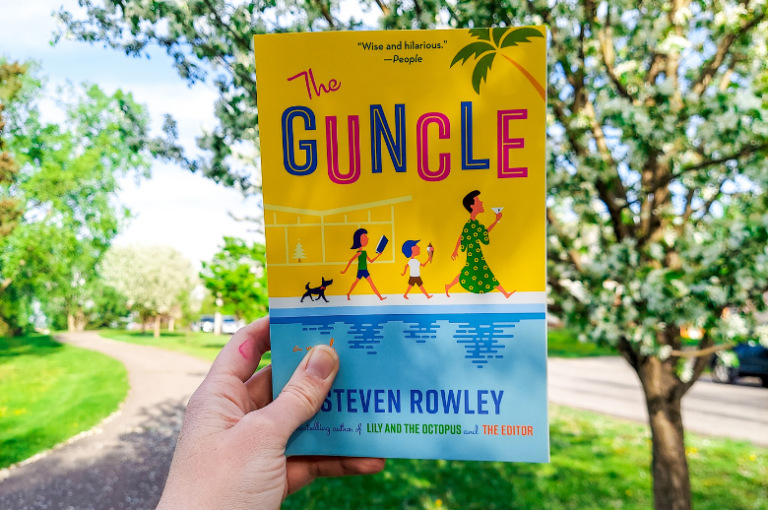 Want to read a book that’ll steal your heart? The Guncle is a great choice for that!

Patrick, or Gay Uncle Patrick (GUP, for short), has always loved his niece, Maisie, and nephew, Grant. That is, he loves spending time with them when they come out to Palm Springs for weeklong visits, or when he heads home to Connecticut for the holidays. But in terms of caretaking and relating to two children, no matter how adorable, Patrick is honestly a bit out of his league.

So when tragedy strikes and Maisie and Grant lose their mother and Patrick’s brother has a health crisis of his own, Patrick finds himself suddenly taking on the role of primary guardian. Despite having a set of “Guncle Rules” ready to go, Patrick has no idea what to expect, having spent years barely holding on after the loss of his great love, a somewhat-stalled career, and a lifestyle not-so-suited to a six- and a nine-year-old. Quickly realizing that parenting—even if temporary—isn’t solved with treats and jokes, Patrick’s eyes are opened to a new sense of responsibility, and the realization that, sometimes, even being larger than life means you’re unfailingly human.

The Guncle came highly recommended and, therefore, was a highly anticipated read for me. The verdict? It didn’t disappoint.

Patrick is a lovable guy who has been through a very traumatic experience (losing his boyfriend in a car crash) and is, years later, living as sort of a recluse. He has a bunch of money after having acted in a very popular show for several seasons, so he doesn’t have to work at all to live comfortably. He just goes on hiatus and closes off his heart.

Meanwhile, his niece Maisie and nephew Grant have just experienced their own trauma of watching their mother die from cancer. That mother was once Patrick’s best friend, so he’s also thrust into grief…again. When Maisie and Grant’s dad reveals that he needs to go into rehab for addiction, he asks Patrick to take the children for the summer.

What ensues is funny, heartwarming, and just really a joy to read. The way Patrick bonds with the children is so sweet, and you watch them all start to heal each other just a little throughout their time together. Of course, it’s not all just walking around and smelling the roses – there are some hard times, too.

What I loved most about this book beyond the beautiful portrayal of complicated grief and healing:

Really, there was a lot to love about this book, and it’s one I’ll recommend. If you’ve read it, please let me know if you loved it in the comments!

I stumbled across this video on Twitter and felt it needed a spot here. Cheers!

Follow along as I break down some of Patrick’s Guncle Rules from my novel THE GUNCLE — on sale now from @PutnamBooks. CHEERS! 🍹 pic.twitter.com/4djSN2cdmR