Review: A Ballad of Love and Glory by Reyna Grande 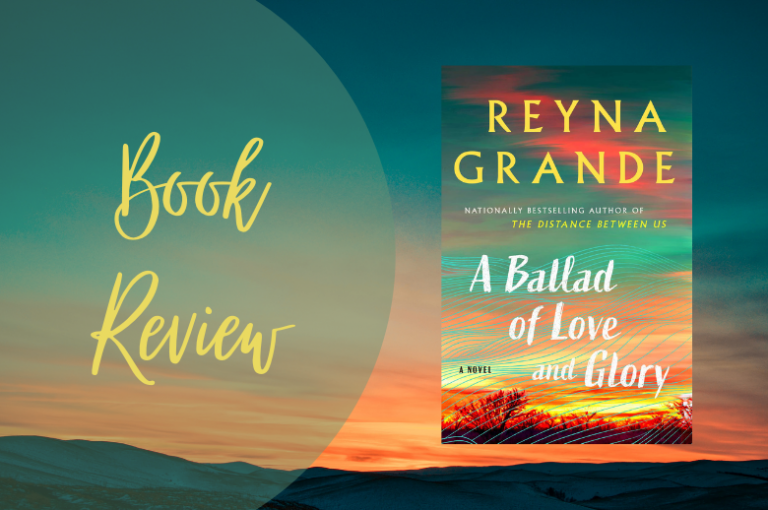 What an epic story A Ballad of Love and Glory is! I’m glad I was able to read an Advanced Reader’s Copy of this one. Read on for my full review!

Want to see more of the best historical fiction from 2022? Check out 2022 Historical Fiction: Huge List of New Releases.

A forgotten war. An unforgettable romance.

The year is 1846. After the controversial annexation of Texas, the US Army marches south to provoke war with México over the disputed Río Grande boundary.​

Ximena Salomé is a gifted Mexican healer who dreams of building a family with the man she loves on the coveted land she calls home. But when Texas Rangers storm her ranch and shoot her husband dead, her dreams are burned to ashes. Vowing to honor her husband’s memory and defend her country, Ximena uses her healing skills as an army nurse on the frontlines of the ravaging war.

Meanwhile, John Riley, an Irish immigrant in the Yankee army desperate to help his family escape the famine devastating his homeland, is sickened by the unjust war and the unspeakable atrocities against his countrymen by nativist officers. In a bold act of defiance, he swims across the Río Grande and joins the Mexican Army—a desertion punishable by execution. He forms the St. Patrick’s Battalion, a band of Irish soldiers willing to fight to the death for México’s freedom.

When Ximena and John meet, a dangerous attraction blooms between them. As the war intensifies, so does their passion. Swept up by forces with the power to change history, they fight not only for the fate of a nation but for their future together.

Heartbreaking and lyrical, Reyna Grande’s spellbinding saga, inspired by true events and historical figures, brings these two unforgettable characters to life and illuminates a largely forgotten moment in history that impacts the US-México border to this day.

Will Ximena and John survive the chaos of this bitter war, or will their love be devoured along with the land they strive to defend?

A Ballad of Love and Glory is described as A Long Petal of the Sea meets Cold Mountain, and I can definitely see that. It’s very detailed on the historical side of things, alongside a love story between what seems like an unlikely couple, but their love transcends culture and ethnicity.

We follow Ximena and John separately at first, and then together as their worlds collide through the war. Their love story is so unlikely, yet at the same time, it makes sense. They both have broken lives due to the war, and it brings them together.

There’s just a ton going on in this book. The historical element is very well defined and you get a lot of background into what’s happening and why. Having also just read A Long Petal of the Sea, I can see how the writing is similar, with so much history rolled into it, but I actually like Love and Glory better because it didn’t take as much time out of the story in order to go over history lessons.

Besides a ton of historical facts, this book is also pretty raw in the details. It’s a book about war, and it doesn’t shy away from some depictions of what things were really like. There’s a lot of violence, a lot of death, and a lot of suffering. I wasn’t quite expecting that to be honest, and it made the book pretty heavy at times. I had a hard time picking it up a few times, knowing I was descending into a land of death and destruction, but I also couldn’t stay away.

I thought about this book long after I put it down, and it’s still pretty vivid in my mind a few weeks after reading it. It really was a pretty incredible story! If you like historical fiction, stories of enduring love despite a lot of strife, and don’t mind some pretty uncensored descriptions of what happens during a war, I recommend picking up A Ballad of Love and Glory. 4 stars from me!

Loved your review on the book about the war. Will check it out. I also enjoyed reading * All the light…*. Take care. Enjoy your cute little one. Dita