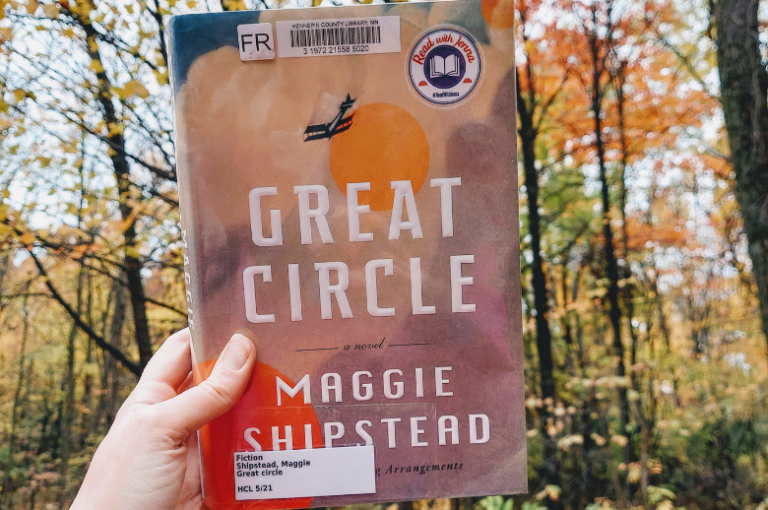 Great Circle was not what I expected, but I did end up liking it! Read on for my full review and find out what I didn’t expect.

After being rescued as infants from a sinking ocean liner in 1914, Marian and Jamie Graves are raised by their dissolute uncle in Missoula, Montana. There—after encountering a pair of barnstorming pilots passing through town in beat-up biplanes—Marian commences her lifelong love affair with flight. At fourteen she drops out of school and finds an unexpected and dangerous patron in a wealthy bootlegger who provides a plane and subsidizes her lessons, an arrangement that will haunt her for the rest of her life, even as it allows her to fulfill her destiny: circumnavigating the globe by flying over the North and South Poles.

A century later, Hadley Baxter is cast to play Marian in a film that centers on Marian’s disappearance in Antarctica. Vibrant, canny, disgusted with the claustrophobia of Hollywood, Hadley is eager to redefine herself after a romantic film franchise has imprisoned her in the grip of cult celebrity. Her immersion into the character of Marian unfolds, thrillingly, alongside Marian’s own story, as the two women’s fates—and their hunger for self-determination in vastly different geographies and times—collide. Epic and emotional, meticulously researched and gloriously told, Great Circle is a monumental work of art, and a tremendous leap forward for the prodigiously gifted Maggie Shipstead.

This book was good and I enjoyed it, but it also wasn’t quite what I was expecting. I went into it expecting a lot of adventure, and the adventure was more in bits and pieces in between more family/friend/relationship content. I also had no idea that there would be so much sex and lust in this book! I don’t have a problem with sex and lust, but I just didn’t expect it. Lust, though, becomes a theme throughout the entire book: lust both for other humans and for what you really want in life.

Marian’s story was very well done. I felt like a really knew her as a character, understood her motives, and rooted for her throughout the book. Her life story was super interesting and fun to read.

Hadley, on the other hand…wasn’t my favorite. I’ve read some other reviews of this book and have seen that there are quite a few others who feel the same. I just didn’t think this book needed her side of things to be great. Marian’s story was so compelling, so unique, and so exciting, and Hadley’s was just not. I mean, it was okay, but it just felt unnecessary. In fact, the further on I got in the book, I felt like I was racing through Hadley’s parts to get back to Marian’s. At 600+ pages, I think Hadley’s part of the story just didn’t need to be there.

I also enjoyed the mystery portion of this book. You kind of know how it’s going to end, but you’re not exactly sure, and then as the book goes on, you get these clues that the end you thought was coming might actually not be coming. I loved the way Shipstead weaved that in there!

The adventure parts were, like I mentioned, a little less a part of the book than I thought they’d be when I first picked it up. However, that wasn’t really a negative, since the relationship/family portions were great too. In fact, they ended up being really necessary to really get into the book and understand Marian’s needs and wants and drives.

Overall, I liked Great Circle. It did start to get a bit long for me in the middle, especially during Hadley’s parts, but picked up as I got closer to the end. I gave this one a solid 4 stars.

That sounds like an amzing book. Wasnt it nomainated for a Book Award as well?

It really was epic! It was shortlisted for the Booker Prize.