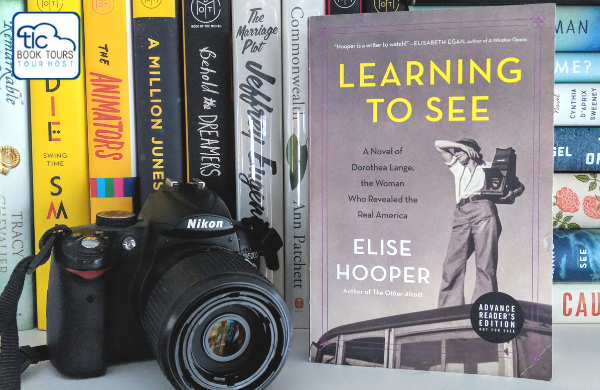 I love a good strong woman protagonist, and Learning to See definitely fit that description! This work of fiction is based on the real life of Dorothea Lange, a woman photographer in a time when a woman’s work was seen more as being a mom, staying in the home. I really didn’t know anything about Lange, so it was fun to put her on my radar.

Lange was a gifted photographer who used her talents to try to show the rest of America some of the struggles that the poorest during the Great Depression and beyond were going through. Later in life, she photographed the internment camps where the Japanese were interned during WWII. While she saw some success during her career, she was forced to make sacrifices in her family life to keep her sons safe and well cared for. They lived with foster families during the height of the Great Depression and Lange’s career, so that she could work to make enough money to support them.

I really enjoyed this book! The writing style was pretty straightforward and kept the focus on the story of Lange’s life. While it followed the arc of her life, the author did have to take some creative liberties to make the book follow more of an arc you find in a work of fiction. The author does a good job of explaining that, and there are some notes in the back of the book about Lange, along with some pictures of her photographs. You can see how some of them are worked into the story of the book, which is fun. However, I definitely feel like I need to read more about Lange’s real life now so I know what was true about her in the book and what was changed to follow the story line. I could also tell it was hard to get her whole life into 300-some pages, as there had to be some pretty big jumps over years in the story.

Overall, this book was a fun read. It’s interesting how the dilemma of raising kids vs. going back to work is one that still causes anxiety for many moms (and, increasingly, more dads) today. I really loved Lange’s story and enjoyed the author’s interpretation of her inner thoughts, hopes and desires. A solid 4-star read! 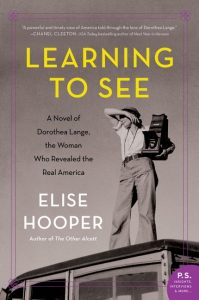 About Learning to See

“Written with grace, empathy, and bright imagination, Learning to See gives us the vivid interior life of a remarkably resilient woman. Dorothea Lange’s story is about passion and art, love and family, but also about the sacrifices women make—and have always made—to illuminate the truth of the world.” —Danya Kukafka, national bestselling author of Girl in Snow

Learning to See is a gripping account of the Dorothea Lange, the woman behind the camera who risked everything for art, activism, and love. …

In 1918, a fearless twenty-two-year old arrives in bohemian San Francisco from the Northeast, determined to make her own way as an independent woman. Renaming herself Dorothea Lange she is soon the celebrated owner of the city’s most prestigious and stylish portrait studio and wife of the talented but volatile painter, Maynard Dixon.

By the early 1930s, as America’s economy collapses, her marriage founders and Dorothea must find ways to support her two young sons single-handedly. Determined to expose the horrific conditions of the nation’s poor, she takes to the road with her camera, creating images that inspire, reform, and define the era. And when the United States enters World War II, Dorothea chooses to confront another injustice—the incarceration of thousands of innocent Japanese Americans.

At a time when women were supposed to keep the home fires burning, Dorothea Lange, creator of the most iconic photographs of the 20th century, dares to be different. But her choices came at a steep price…

A New Englander by birth (and at heart), Elise lives with her husband and two young daughters in Seattle, where she teaches history and literature. The Other Alcott was her first novel.

Wednesday, January 30th: Into the Hall of Books

This sounds so inspirational! Thank you for being on the tour!
Sara @ TLC Book Tours

I finished this wanting to read more nonfiction about Lange too! I appreciated that the author at least let us know that she took some liberties, but I’d like to be able to compare her character to what we know about the real Dorothea Lange myself 🙂