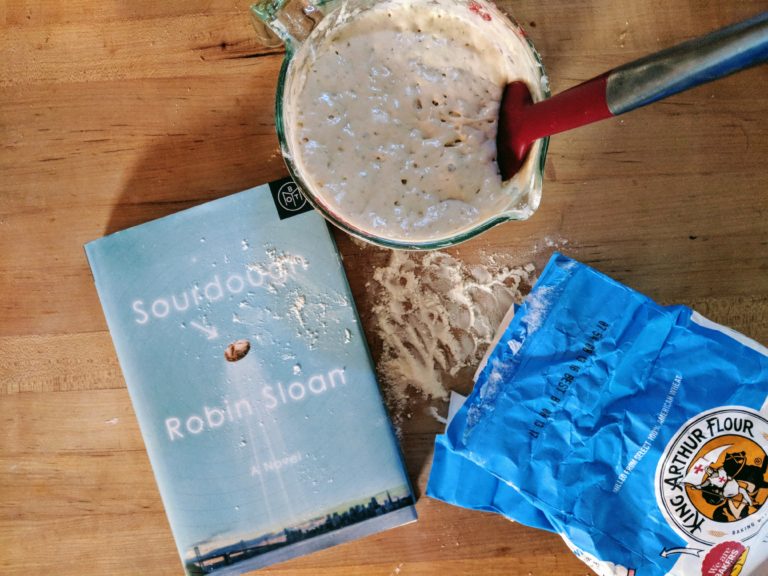 This is one heck of a unique novel. Centered around food and baking, it’s also a bit futuristic and strangely magical.

Our main character is Lois, a young, gifted software programmer who has just moved to California to work at a company that programs robotic arms to do various jobs. She moves from a slow life in Michigan to a world of long days in an office, surviving on quick bites in between work. She’s been trying Slurry, a sort of nutritional meal-replacement paste, to supplement her diet. Until, that is, a new restaurant opens up very close to her apartment called Clement Street Soup and Sourdough. She falls in love with their bread and soup so much that she orders nearly every night, and is soon called their “Number One Eater”.

When the guys who run the restaurant inform her that they’re moving away, she’s not happy. They show up at her door and hand her something to keep as a gift: some of their sourdough starter.

It’s here that the story moves into strange gastronomic territory. The starter creates loaves of bread that seem to have faces in them, and it seems to sing at times. Lois’s bread becomes well-loved, and she finds a way to combine both her career and her new love of sourdough baking. She finds camaraderie in a strange gathering of people in an underground farmer’s market of sorts, where science is just as much a part of food as the ingredients are.

Although far-fetched at times, Sourdough is a foodie novel unlike any other I’ve read before, and I liked it. I’ve been wanting to start my own sourdough starter for some time, and after reading this book, I went for it. As I type up this review, it’s growing and bubbling in my kitchen. Our relationship to food is so fascinating, and I thought this book explored that relationship in a really unique way: with a little magic.

I loved watching Lois’s relationship to food change slowly and completely throughout the novel. Here’s a paragraph where we see her start to make connections between making food and feeling good about it, after the chef at her company’s kitchen asks her to make bread for them:

I give Sourdough a solid 4 stars. It’s unlike anything else I’ve read, and I doubt I’ll read much else like it in the future.

fictionfoodI would recommend this book to others
Share 0 FacebookTwitterPinterestEmail

[…] 24-Hour Bookstore was at the top of my list, since I LOVED Robin Sloan’s Sourdough. Joli did a review of this novel a little while ago, and her cover art is both original photography and STUNNING. Becky […]