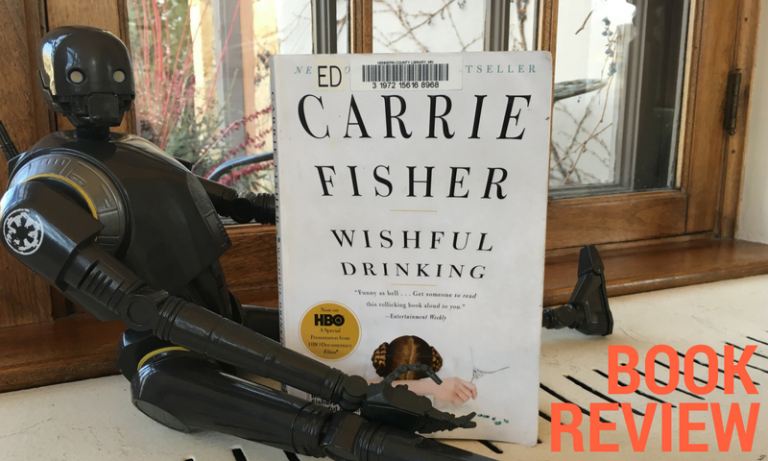 After Carrie Fisher died in December, I read many tributes to her witty and affecting literary voice. It seemed a shame that I’d never explored her work, so I put Wishful Drinking, her well-reviewed 2008 memoir, on hold at the library. The long wait was worth it: the book is great. I came to think of Fisher as a bright and interesting woman to whom weird and difficult things happen. In between those circumstances, she makes some bad choices. As she writes, “When you’re a survivor, in order to be a really good one, you have to keep getting in trouble to show off your gift.” In that spirit, I came to appreciate Fisher as someone who, in spite of everything, keeps working hard to do her best.

The book begins with a description of Fisher’s parents’ relationship. Debbie Reynolds and Eddie Fisher, whom she describes as the “Brad Pitt and Jennifer Aniston of the late 50s, only slightly more so,” made a chaotic and surreal existence for their two children, Carrie and her non-celebrity brother Todd. However fraught Carrie’s relationship becomes with her mother, the love and loyalty in their bond comes through. Her oft-married and divorced father, on the other hand, falls under Carrie’s more critical eye. Near the end of the book, Fisher writes an account of Eddie attending Grace Kelly’s funeral. “Please ask me if he actually knew the princess,” Fisher begs in her conversational style. “Of course he didn’t….but my father had his own reasons for going to the funeral of this very famous, beautiful woman. Publicity.” Still, Fisher resists writing him – or anyone else, really – completely off. As she allows herself to make mistakes and recover, she affords others the same space. She repeats an AA maxim in the last chapter, “Resentment is like drinking a poison and waiting for the other person to die.”

In between the bookends of her childhood and her own motherhood, Fisher recounts her marriage to Paul Simon, her addiction, her diagnosis of bipolar disorder (“Oh! Before I forget! My mother wants you all to know this comes from my father’s side. She’s as normal as the day is long.”), and of course, Star Wars. The first line of the chapter about the space saga reads, “Forty-three years ago, George Lucas ruined my life.” The subsequent revelations are light-hearted and center on comic-con. For the real dish, it seems like one might want to check out Fisher’s 2016 release, The Princess Diarist, in which she which details her affair with Harrison Ford.

Still, many of the tales she tells in Wishful Drinking, including one anecdote about her brother shooting himself in the leg, seem incredible. “Now look,” Fisher says in explanation, “I know you might be thinking that a lot of the stories I’m telling you are way over the top. I would totally have to agree – but you can’t imagine what I’m leaving out.” Throughout, Fisher’s matter-of-fact and self-deprecating narrative stance pull readers to her side. “We’re only as sick as our secrets,” she writes; and, “I have problems, but problems don’t have me.”

While turning the last pages of this memoir, I felt appreciation and admiration. Carrie Fisher had a fine mind and a sharp sense of humor. I’m glad to know her a bit better from reading this, and I recommend spending a couple of laugh-out-loud hours breezing through it.