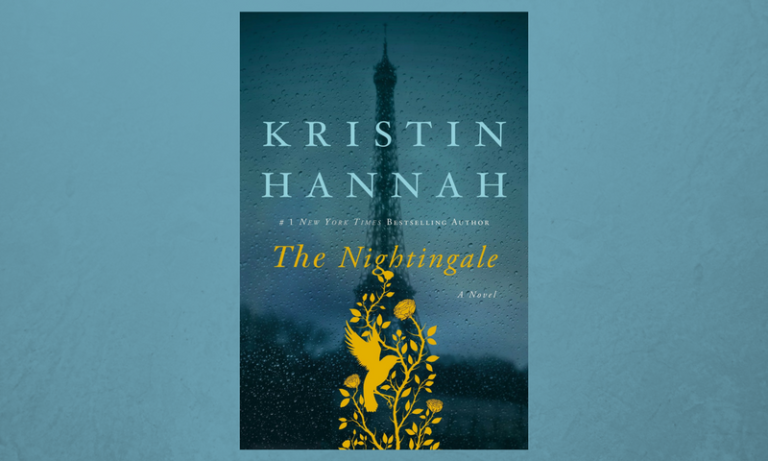 I read The Nightingale by Kristin Hannah for my October book club….which was awhile ago, but it was so good it still warrants a review four months later.

Vianne and Isabelle could not be more different. Isabelle is young and seemingly carefree, while her sister Vianne is content with her family life. Then WWII strikes and Vianne’s husband is sent to the front lines and the girls’ father forces Isabelle to leave Paris and live with Vianne in rural France. The story follows the sisters throughout the war, and each demonstrates bravery in vastly different ways, showing that even the smallest act can make a difference.

The story started pretty slowly, but before I knew it Hannah had captured my attention. I’ve read a lot of WWII novels and this one is up at the top. The way Vianne and Isabelle’s relationship ebbs and flows felt incredibly realistic and heartbreaking. What I loved so much about this story is that there is a crescendo, but you’re never really sure where the peak of the story is, which I think is so similar to real life. We don’t always get a perfect ending or our lives tied up in perfect packages. We do the best we can and that’s exactly what Vianne and Isabelle did, each in their own way.

“I hope you never know how fragile you are, Isabelle.” “I’m not fragile,” she said. The smile he gave her was barely one at all. “We are all fragile, Isabelle. It’s the thing we learn in war.”

I related to Vianne because so often we readers are presented with heroines who perform outwardly courageous and bold acts. But many of us aren’t that bold in real life, nor do I think we would be during a war. But, I could identify with Vianne’s kind of heroism, the kind where quiet, but daring actions make a difference. There is no praise or reward, during or after they are completed, but you still know they mattered. Hannah captured these everyday acts of bravery so incredibly well, which is just one of the many reasons I loved this book.

While reading, I noted the page numbers of a few quotes I wanted to revisit. It’s interesting. After going back to each page, the quotes I chose to highlight all had the same theme: loss. Loss of oneself, loss of others, the loss of love. Hannah beautifully portrays all of these losses throughout the story, but somehow also shows how joy and hope have a way of springing up where they’re most needed.

To say I loved this book is an understatement. It may be the best book I’ve read all year. If you haven’t already read this book, just get on the bandwagon already! I promise you will not be disappointed. Finally, a 5 out of 5 stars!

One of the best WWII books ever!

[…] Why: I swear this was inadvertently another World War II read! The cover actually caught my eye because I have been fascinated with trains since I was a little girl and would run down the block to count engines and hope to see a caboose. What sold me, though, was the comparison of this work to Water for Elephants and The Nightingale. I read Water for Elephants a few years back and greatly enjoyed it, and I have heard nothing but great reviews of The Nightingale – including from our own Janna! […]