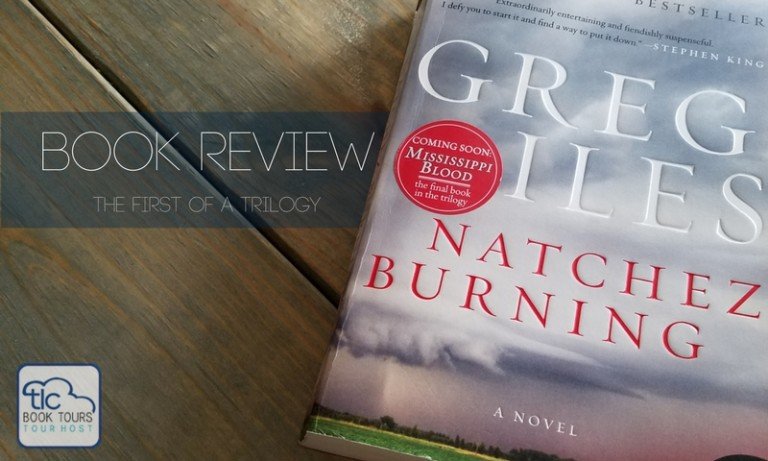 Why: It is hard for me to say I enjoy suspense novels because I associate them with being scary. That said, I truly love mysteries and the drama of putting pieces together to figure out how the story will play out. Natchez Burning and the other two books in the trilogy (Bone Tree and Mississippi Blood) made my TBR list because they have combined my elements of “suspense” with – you guessed it – a historical setting. To top it off, these novels revolve around race relations which has been a topic of choice for me lately.

“If a man is forced to choose between the truth and his father, only a fool chooses the truth.”

The Story: On a very basic, non-spoiler level, Natchez Burning is a tale of the lasting horror that occurred in The South during the Civil Rights era. It shares the turmoil Natchez Mayor Penn Cage faces when his stoic father, a prominent physician and military veteran, is accused of murder. With the past bleeding into the present, Penn works with local journalist Henry Sexton and his fiance Caitlin Masters to solve not only his father’s case, but a litany of cold cases long abandoned by the rest of the world.

(The story behind Natchez Burning is compelling in an of itself. Click here for a short video of author Greg Iles describing the events leading up to writing this novel.)

…to yearn for ignorance is to embrace the wishful thinking of a child. For once the stone hits the surface of the pond, the ripples never really stop. The waves diminish, and all seems to return to its previous state, but that’s an illusion.

Opinion: I had my doubts when I began this book. It starts off very heavy. Made it hard to imagine tackling 600 more pages! Then, it got me. I love Iles’ writing style. It is uncensored writing that feels genuine and displays an honest representation of the hell that so many went though.There are passages I felt got a little verbose, but then they made perfect sense later. The plot is intricate but moves along. Best of all, I didn’t figure it out. Oh, I had theories! I had plenty of theories! I enjoyed that I was still surprised with the twists and turns, though. To me, that is the sign of a great mystery.  Leaves me itching to start The Bone Tree!

What happened next unfolded with the unreality of dreams.

Recommendation: I highly recommend this book for fellow mystery lovers. Reading it is not quick or easy, though. I can’t imagine reading this during commutes or short, segmented sessions. It takes time to digest and comprehend the relationships.The complexities are worth the struggle, however! I felt immersed in the story, felt the pangs as if it was my own family. Another review claims this resembles classic literary fiction, and I can’t disagree. Not recommended for the faint of heart or those unwilling to dig into the past.

“…don’t ask me anything you don’t want the answer to.”

Journaling Prompts: (I like to include questions with each of my reviews, but it is even better when questions are provided! These come from publisher HarperCollins reading guide.)

book reviewcrimedramafamilyfictionI would recommend this book to othersmysterysuspensethriller
Share 0 FacebookTwitterPinterestEmail

I read this. It’s good but not unputdownable. It deserves high ratings because of its basis on real cases.

Very fair assessment! I thought on numerous occasions about the the reality of this work of “fiction”.

Digging into the past can be very uncomfortable but I’m willing to do it!

[…] *As with my previous review, this brief synopsis will share no spoilers!* After the climactic end to Natchez Burning, Penn Cage […]

[…] has been reading this trilogy and knows you’ll be hooked after book one! Check out her reviews of Natchez Burning and The Bone Tree to get a taste of Greg Iles’ writing. Don’t worry – no […]

[…] works. Period.  I’ve mentioned (twice) my love for his writing style in my reviews of Natchez Burning and The Bone Tree. I’ve noted that the reality of the content provides a cinematic quality, […]

Loved the book. Shame that the only thing I came away with was how much I absolutely effing HATED Penn Cage’s girlfriend. I didn’t wish anything but bad on her throughout the entire of the novel.