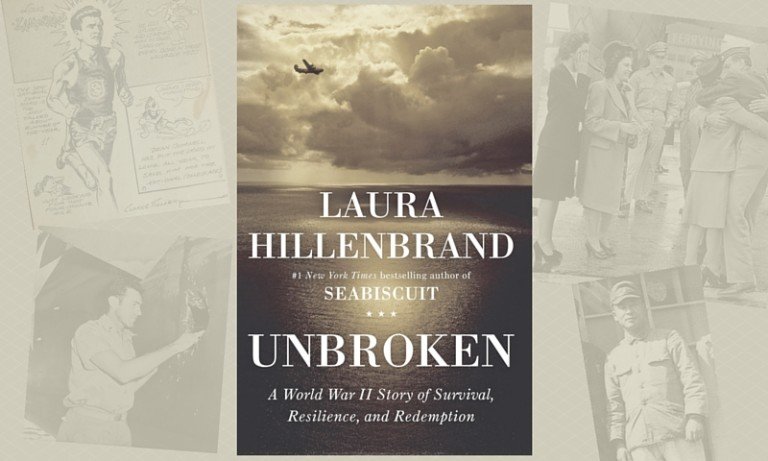 Why: The reason I chose this book was simple and uninteresting: it was on my Amazon reading list. I had actually tried to read this last summer, but ended up returning it – gasp – unread to the library. The cover and subtitle stayed with me though, and I when I picked it up this time I realized I was meant to read this book. My father is a military reenactor, specifically for WWII. He instilled this great love of military history in me, and he was also my track coach while I was growing up! Book pairing made in heaven…

Louie was determined that no matter what happened to their bodies, their minds would stay under their control.

The Story: This is the biography of Louis Zamperini, Olympic runner and World War II soldier. Author Lauren Hillenbrand takes readers through Louie’s rebellious childhood, his decision to enter to the military, the friendships he made with his fellow soldiers, the stress of combat and the bond he felt with his aircraft. She then transports readers to the heart of the Pacific Theater as Louie is captured by the Japanese and becomes one of the most notable POWs of his time. Hillenbrand spares no details of the atrocities of war and the experiences Zamperini (and thousands of others) faced at the hands of their captors. She shares the small triumphs from various camps as well as the realities and haunting images these men were forced to live through, and relive time and again, even after the countries ended the violence.

As soldiers returned to the United States, Hillenbrand depicts the lasting effects veterans of all nations were left to cope with, and the struggles they faced in managing them. She tells of Louie’s quest to forget, the rage that consumed him, and his eventual release from the shackles of his memories. She concludes by sharing the fulfillment of a promise Louie made to God, and what he accomplished in the remainder of his incredible 97 years on this planet.

As dangerous as these acts were, for the POWs, they were transformative. In risking their necks to sabotage their enemy, the  men were no longer passive captives. They were soldiers again.

Opinion: This would be a masterpiece of a novel, but instead it is a ridiculously well-researched and brilliantly told true story. Hillenbrand takes what could be dark, depressing, and horrifying material and instead, focuses on the hope and resilience that survived those inhumane conditions. She deftly shares the stories of the men she interviewed in a manner that educates, enthralls, and connects readers to the emotions of the individuals in her narrative. Which leads me to the other aspect of this piece that I find particularly wonderful. Not only does Unbroken share a view of the war we often hear little about in our history classes, but it encompasses so much more than the life story of Louis Sylvie Zamperini. Readers are able to wrestle with the turmoil of the Japanese as well as tens of other US soldiers. Hillenbrand develops a relationship between reader and character that rivals any title of fiction, and meticulously uncovers details to leave you feeling as if you’d known each man yourself. I am so glad I followed through and read this, and am even more grateful for the sacrifices of those who have and continue to serve in our military.

When he thought of his history, what resonated with him now was not all that he had suffered but the divine love that he believed had intervened to save him. He was not the worthless, broken, forsaken man that the Bird had striven to make of him. In a single, silent moment, his rage, his fear, his humiliation and helplessness, had fallen away.

Recommendation: Don’t write this book off because it’s a biography about someone other than Steve Jobs. This is an incredibly well written story more than anything. While this is not light reading by any stretch of the imagination, I do not believe it limits itself to history aficionados or those interested in WWII. It plays out as a movie (and yes, Angelina Jolie did direct a film version of this story), with drama and romance and struggle; a villain and a hero; action and character development. It takes some commitment, but I don’t think you’ll be disappointed. Also, read the epilogue and do not skip the “Acknowledgement” portion at the end. I normally do. A bunch of thank you’s to people important to the author? No thanks. Not so with Hillenbrand. After sharing in this book, the acknowledgements are both interesting and meaningful. At least skim them.

[…] country. (The world too, but I try to be somewhat realistic!) As you may know from my review of Unbroken by Lauren Hillenbrand, my father is also a WWII reenactor and history buff. He consumes anything and everything he can […]