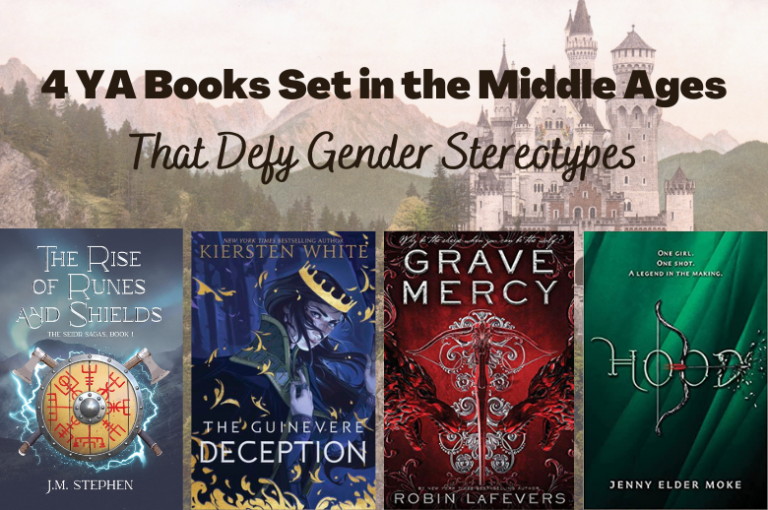 The following is a guest post by author JM Stephen. Meet her at the bottom!

Many readers read to get away from it all, and sometimes the best place to go is not to a tropical island or a cool, modern city, but back in time into the throes of history. While the popularity of certain time periods in Fiction waxes and wanes, a time period that is really seeing a resurgence is the Middle Ages. So much Young Adult Fiction published in the last three to five years takes place in the time of Camelot, Vikings and Charlemagne. What’s not to love about castles and kings, knights and the possibility of a magical being? It’s about time this period in history comes back around as it provides great fodder for some seriously high drama. The Middle Ages was a time of great political and social upheaval, tensions ran high as far as equity was concerned and the style of the times is due for a major comeback. Not only that, but who can resist the fancy castles and high Medieval fashions compete with corsets and metal swords, the prospects of bows and arrows and jousting, or perhaps the odd dragon or deadly griffin?

When I was working on my second Young Adult Series, The Seidr Sagas, which follows a pair of twin sorcerers/ess living in a Viking village in Norway, I wasn’t sure how many new books took place within this time period. But Vikings, like the Middle Ages, are also seeing a resurgence in popular culture since so much of the social and gender politics of the Vikings’ day are alive and well in our time. In Book One of The Seidr Sagas, The Rise of Runes and Shields (Amazon, Goodreads, Bookshop.org), a pair of twins learn that their family has practiced an ancient magic, the Seidr, that allows them to become one with nature and the Norse gods, like Odin himself. The Seidr aim to do good, but they are not always understood, and the twins are run out of town and must seek refuge with their reclusive aunt, who has not been seen for years.

While the Middle Ages was not necessarily a time of great equality when it came to gender politics or embracing other cultures, many books set in the Middle Ages that are written today strive to right that wrong through the exploration of strong female characters and the addition of people of color in prominent roles. While what we know of the Middle Ages suggests a more monolithic culture, when historians dive deeper, they learn that there was more equity going on during that time than we first thought. As I was writing The Rise of Runes and Shields, I wanted to make sure not to play into gender stereotypes and so I made sure the female twin, Freyja, was an accomplished warrior, while her brother was more of a bookworm. As I did my research on Viking culture, I found that this was often the case. Women were allowed to fight for their villages alongside men and they had their own group, the Shieldmaidens, who banded together to protect each other and their lands.

It turns out the notion of turning preconceived notions on their heads is done often in the new books that take place in the Middle Ages. One such book is Keirsten White’s The Guinevere Deception (Amazon, Goodreads, Bookshop.org), which explores an alternative version of the story of King Arthur and Queen Quinevere. It follows the future Queen of Camelot, Guinevere, who has come to wed a strange and charismatic young king she has never met, King Arthur. As attacks from the magical realm threaten the future of the Camelot Guinevere has sworn to honor and protect, it comes out that the new queen may be even more than she appears. Not only is it Quinevere’s job to protect the new king from magic, but it is her secret that will either help, or harm, her new world.

Speaking of young ladies who take up the sword instead of the sewing box, Robin LaFevers’ Grave Mercy (Amazon, Goodreads, Bookshop.org) shows that girls are much better guardians of life and death. Grave Mercy follows seventeen-year-old Ismae, who enters a Welsh convent, not for protection or to pine forever in religious piety, but to become a warrior and handmaiden for Death itself. Set in the Welsh convent of St. Mortain during the Middle Ages, Ismea must navigate the Medieval countryside, encountering heroes and villains as she trains to do Death’s bidding. Ismea even makes it into the high court of Brittnay, where she will have to tame her heart and quiet her mind in order to carry out her most dangerous mission.

One of the things that is truly compelling about the Middle Ages is the old stories that have swept our imaginations for decades. Jenny Elder Moke’s novel Hood, (Amazon, Goodreads, Bookshop.org) explores just that in her new adaptation of the story of Robin Hood. In this tale, Isabelle is a young girl growing up in the Medieval British lands around Sherwood Forest. She is raised by her mother Marien, who laments that times are hard and that the people of Nottingham have been once again taken advantage of by the Wolf, King John’s ruthless right hand. After Isabelle is caught defying the Wolf while protecting the people of her village, she must journey to find Robin Hood, the father she has never known, so that she can defend herself and her people against tyranny.

Not only do the Middle Ages bring to mind those things of fantasy we loved as kids, castles, dragons, knights and queens, this time period also allows us to explore this age-old world through modern eyes. While the world of the Middle Ages must have been filled with powerful, sword-wielding men and women in nice dresses sewing tapestries and milling about with ladies in waiting, it is the contradictions that are created, like the warrior daughter or a king who needs female protection, that help readers explore a more inclusive and compelling Middle Ages.

JM Stephen loves Vikings, kickboxing and pondering the awesome largeness that is our universe. She is the author of ten novels, five fantasy novels under this pen name and five literary novels under the pen name Jessica Stilling. She holds a degree in Creative Writing from The New School and an MFA in Creative Writing from the City University of New York. Stephen has taught writing and literature at the City University of New York, the State University of New York, The New School and The Gotham Writers Workshop. Her work has appeared in many journals and publications such as Ms. Magazine, Bust Magazine, The Writer Magazine and The Warwick Review. Growing up in the Midwest, JM Stephen is used to tornado warnings and empty state roads lined with cornfields and Wal-Marts. She lived in New York City for eighteen years and has since moved to Southern Vermont where she raises chickens, plays with her dog and cat and fails miserably at sustaining a garden. You can check out her work at her website jessicastilling.com.