Review: Jane and the Year Without a Summer by Stephanie Barron 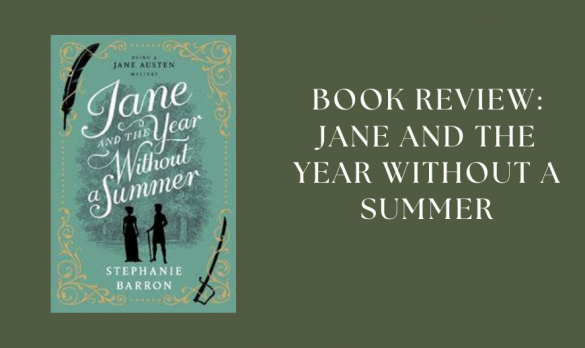 May 1816: Jane Austen is feeling unwell, with an uneasy stomach, constant fatigue, rashes, fevers, and aches. She attributes her poor condition to the stress of family burdens, which even the drafting of her latest manuscript—about a baronet’s daughter nursing a broken heart for a daring naval captain—cannot alleviate. Her apothecary recommends a trial of the curative waters at Cheltenham Spa, in Gloucestershire. Jane decides to use some of the profits earned from her last novel, Emma, and treat herself to a period of rest and reflection at the spa, in the company of her sister, Cassandra.

Cheltenham Spa hardly turns out to be the relaxing sojourn Jane and Cassandra envisaged, however. It is immediately obvious that other boarders at the guest house where the Misses Austen are staying have come to Cheltenham with stresses of their own—some of them deadly. But perhaps with Jane’s interference, a terrible crime might be prevented. Set during the Year without a Summer, when the eruption of Mount Tambora in the South Pacific caused a volcanic winter that shrouded the entire planet for sixteen months, this fourteenth installment in Stephanie Barron’s critically acclaimed series brings a forgotten moment of Regency history to life.

As a devoted fan of Jane Austen, I was excited to get the opportunity to read one of the books in Stephanie Barron’s Being Jane Austen series. In these books, Jane, already a published novelist, solves crimes and other happenings while also partaking in the customs of Regency-era life. I had heard the books praised for both their attention to historical accuracy and the warmth they brought to Jane’s character, so I was excited to spend some time in the world of Austen-era Britain.

In this installment of the series Jane, seeking relief from perplexing health problems, and her sister Cassandra decide to head to Cheltenham Spa to “take the waters” in hopes of restoration. While there, they come across quite the cast of characters in the boarding house where they are staying, including an invalid and her nurse, a charming naval man, and an uptight brother and sister. Each of these characters was well created, and I enjoyed the dialogue between the various borders, both within their lodgings and as they strolled around town. Though Jane and Cassandra had hoped to spend their time at Cheltenham relaxing, the arrival of a mysterious (and titled) visitor soon thrusts them into a mystery with deadly consequences.

Overall, I enjoyed my first dip into the mysteries of Stephanie Barron. This is definitely a book for Jane Austen fans, as there are tidbits, like the sales of Emma sprinkled throughout the book for them to enjoy. I would also recommend that those picking up the book be in the mood for Regency-era conversational and social conventions. Though I don’t think you need to have read Austen’s work to enjoy this book, if you’re not into stories with the feel of that period, it might move a little slowly for you. however, I found this book to be charming and a great break from heavier things. If you’re someone who dearly wishes to spend a little more time under Austen’s spell, you should definitely pick up this book.

Thanks for sharing your thoughts, Katie. I am glad that you enjoyed it. Barron is an excellent writer – channeling Austen’s voice, including great historical details, and immersing us in a fun mystery. I am looking forward to the next book in the series.