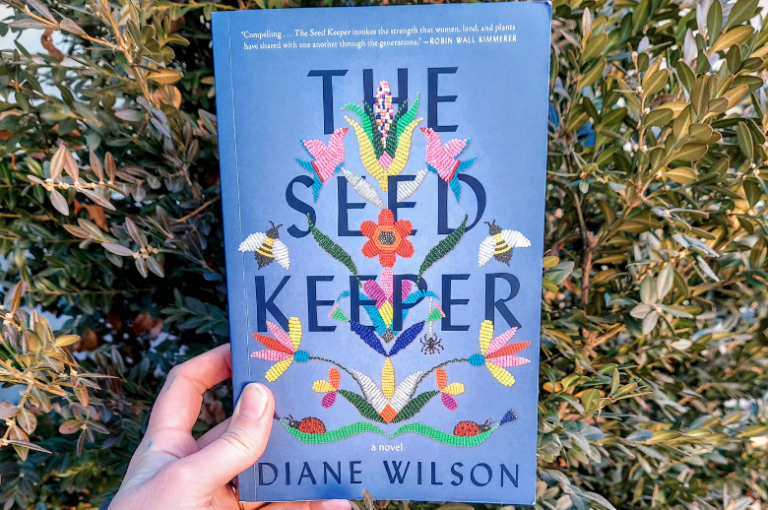 Review spoiler: The Seed Keeper is one of my favorite books of the year! It was so, SO good. Read on for my full review!

Rosalie Iron Wing has grown up in the woods with her father, Ray, a former science teacher who tells her stories of plants, of the stars, of the origins of the Dakota people. Until, one morning, Ray doesn’t return from checking his traps. Told she has no family, Rosalie is sent to live with a foster family in nearby Mankato–where the reserved, bookish teenager meets rebellious Gaby Makespeace, in a friendship that transcends the damaged legacies they’ve inherited.

On a winter’s day many years later, Rosalie returns to her childhood home. A widow and mother, she has spent the previous two decades on her white husband’s farm, finding solace in her garden even as the farm is threatened first by drought and then by a predatory chemical company. Now, grieving, Rosalie begins to confront the past, on a search for family, identity, and a community where she can finally belong. In the process, she learns what it means to be descended from women with souls of iron–women who have protected their families, their traditions, and a precious cache of seeds through generations of hardship and loss, through war and the insidious trauma of boarding schools.

Weaving together the voices of four indelible women, The Seed Keeper is a beautifully told story of reawakening, of remembering our original relationship to the seeds and, through them, to our ancestors.

The Seed Keeper is one of those stories that hits you hard, then sticks with you long after you’ve read it. It was haunting and heartbreaking and beautiful and hopeful and it just swept me away.

As a Minnesotan, I’ve seen and heard about this book quite a lot. I knew when I first saw the synopsis that I wanted to read it, so I bought it for myself several months ago. I finally found a hole in my TBR list and picked it up in November, right over the Thanksgiving holiday. I saw others reading Native American stories around that time and decided to go for The Seed Keeper. So glad I did!

Rosalie Iron Wing’s story is a hard one and, unfortunately, a common one for many Dakota people, and all other American Indian tribes. She comes from an entire line of traumatized people, due to the way they were treated by colonizers. She grew up in a foster home after her father died, and it was not a loving home.

Having grown up in a shack in the woods, Rosalie is moved to the city and expected to fall into a regular life. She doesn’t get any support and, unsurprisingly, has a hard time.

Rosalie’s story is interwoven with her ancestors’ stories, and they were all just as compelling as hers. I fell into them so naturally – there was no awkwardness in switching stories. Every story was immersive and told with the same passion. I couldn’t help wanting to read more of every storyline.

Then, there’s the “seed keeper” part, about Rosalie’s connection with the Earth and with seeds and the food that grows from those seeds. You’re taken along with Rosalie on her quest to learn about and understand the seeds, her family, and her heritage. This thread keeps everything pulled together so expertly, and it was just so beautiful.

This book is easily headed to my all-time favorites shelf. 5 stars.