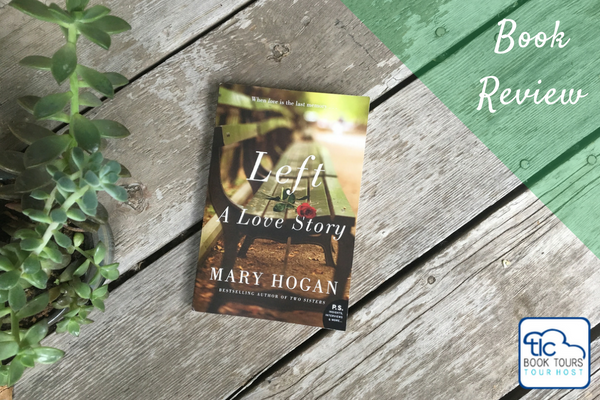 Left is an honest and unflinching story that tackles the reality of having a family member with dementia. Fay Agarra struggles to be heard and taken seriously when her husband begins to change. Beginning with one incident while on vacation, the illness quickly progresses. When it becomes evident that she may be too late, Fay holds fast to the love of her life even as he fades away.

I absolutely loved Left. It was reminiscent of Genova’s Still Alice, which is a work of art in its own right. But instead of telling the story from Judge Paul Agarra’s perspective, Left focuses on Fay. For those familiar with Alzheimer’s disease and dementia, Fay’s story is our story; we feel confused, angry, and frustrated as much as our loved one does. We find ourselves hitting walls when doctors and colleagues deny, or refuse to listen to our insights.

A few years ago, dementia briefly touched my life. Very quickly, my grandmother went from living on her own, to hospitalization, to passing away. Having supported my mother in particular through this experience, I found this story a little bit chilling in its realism. But I don’t know that this book would have been so touching without Hogan’s crafting of the beautiful moments. Fay’s passion for her husband persists through his loss of faculties, and she builds a new life for them where she can support him. Paul returns this love in times of lucidity, showing Fay that in the end, he has never left.

Sorry LQ readers, this one is a bit of a sad review, but honestly I loved the book. I would more than recommend Left to readers of literary fiction who want to experience an author who can truly put love to paper.

I received a free copy of Left by Mary Hogan from William Morrow books in exchange for an honest review. 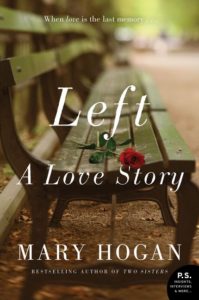 In this beautifully crafted novel from the author of the critically-acclaimed Two Sisters, comes the story of a woman who retreats into a fantasy world on New York City’s Upper West Side as she slowly loses her once whip-smart husband to dementia—perfect for fans of Still Alice.

It started as a dream vacation in Spain, with Fay and Paul Agarra enjoying all the delights of a European holiday. A respected New York City judge, Paul has always been the man Fay can rely on, no matter what. When he inexplicably disappears from a Barcelona street corner, Fay knows something is terribly wrong. Once reunited, Paul shrugs off the episode as a simple misunderstanding—but Fay suspects her almost perfect life has taken a dark and sudden turn.

Soon there are more signs that Paul is beginning to change. Bouts of forgetfulness lead to mistakes in the courtroom. Simple tasks cause unexplainable outbursts of anger. Fay’s worst suspicions are realized when she learns her husband—her rock, her love, her everything—is succumbing to the ravages of dementia.

As her husband transforms before her very eyes, Fay copes with her fears by retreating into a fantasy life filled with promise instead of pain. In Fay’s invented world, she imagines herself living a glamorous life free from heartache, with a handsome neighbor she barely knows rescuing her from a future she can’t accept.

Poignant and beautifully crafted, Left is an unforgettable tale about life’s aching uncertainties—and a woman who discovers that somewhere between hope and reality, an unexpected future will find its way forward.

Mary Hogan is the bestselling author of Two Sisters and the historical novel, The Woman in the Photo. Previous novels include the young adult titles, The Serious Kiss, Perfect Girl and Pretty Face (HarperCollins). Mary lives in New York City with her husband, actor Robert Hogan, and their Catahoula Leopard rescue dog, Lucy.

Tuesday, July 3rd: Thoughts On This ‘n That

Thursday, July 5th: Into the Hall of Books

Dementia is the scariest thing for me … I hope that I would handle it in my loved one in a positive way, but I can only imagine how hard it would be.