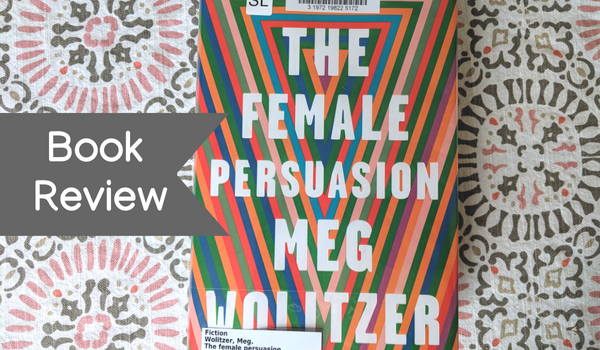 I was pretty dang excited when this book came in for me at the library. I wasn’t expecting it yet at all, considering the long list I had to get in to wait for it! I was intimidated by the length and heft of the book, but I dove in.

The Female Persuasion is multiple things, but at its core, it’s a coming of age novel. It follows Greer, a soft-spoken teen, as she finds her voice and navigates her late teens and early 20s, moving from high school to college to the corporate world.

Of course, we can’t overlook the clear feminism theme, considering the title of the book is The Female Persuasion, and the book has been marketed and hyped as a work of feminist fiction. It definitely accomplished that, but for me, it fell a little flat in some ways.

The story opens with Greer, but is told by multiple characters throughout. That normally works for me, but I got pretty into Greer’s story by the time it switched to another narrator. It made sense to get those other perspectives, but at the same, it pulled me out of the story that I was enjoying.

In general, the book felt a little unfocused to me. I definitely got some enjoyment out of the feminist perspective and the female struggle to be counted as equals in the corporate world and just the world in general, but about 3/4 of the way through, I was getting a bit bored. It also felt to me like some of the feminist struggle stuff I enjoyed in the beginning was becoming muddled and harder to understand toward the end.

I also was confused about the story of Greer and her boyfriend. Her boyfriend’s story takes up a significant piece of the book, but doesn’t really come together with the rest of the theme until close to the end. It added value, but to me, the book could have been shorter by a good 1/4 and I would have liked it better.

The ending of this book wasn’t my favorite, either. It seemed like the message was that female equality is just something we’re always struggling with and working on improving, but then the ending for Greer wraps up in a pretty bow. After the rest of the struggling throughout the story, the ending was too pretty for me.

I know I’ve said a lot of negative things in my review so far, but I did like pieces of this book. Greer’s overall story and the message of the book was interesting and I enjoyed reading it, for the most part. Like I said, it did feel a bit long, but I’ll give this one a solid 3 stars.