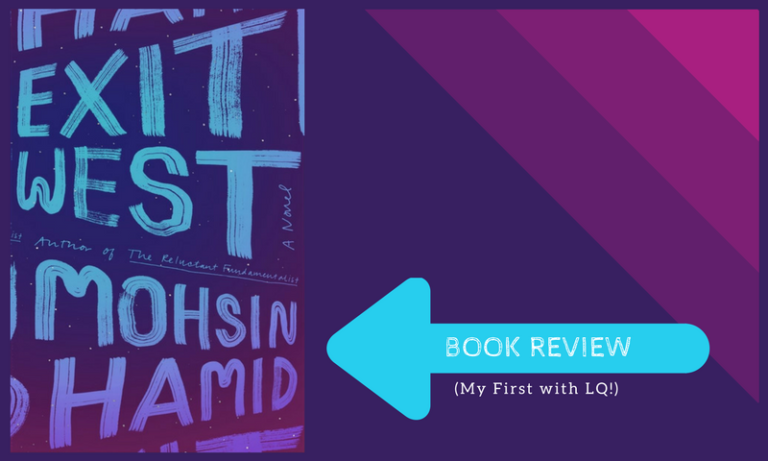 Exit West is the beautiful story of Nadia and Saheed, two young lovers from the Middle East, who come together during a time of militant uprising, and escape to “safer” refuge… only to find themselves struggling in the masses who have flooded unsuspecting and unwelcoming countries.

First of all, I have to say, setting a story in “generic Middle Eastern country” is brilliant. Off the bat in Exit West, I found myself wondering if we were set in a fictional time and place, or whether there was going to be a historical fiction piece that I needed to do some research on (as often happens when I find myself to be woefully ignorant of historical events and personalities). And I think that that piece is part of what caught me a little off-guard; this un-surety of whether I was dealing with reality or another Earth.

Another part of Mohsin Hamid’s work that is absolutely notable, and certainly part of what I found extremely interesting about the read, was the ever-changing and flowing literary style. Staccato notes mixed with an ENTIRE PAGE of one sentence kept me guessing, wondering whose voices these were that filled his head and breathed themselves into life in the pages. Incredibly pertinent to today’s time of unrest, Mr. Hamid also writes beautifully in terms of metaphors, including that of the “doors” that lead individuals to new world. Heralded as a bit of “sci-fi”/true fiction (which I didn’t know about when I picked up this book), these doors are costly, hard to find, and extremely well-guarded. Oh yes, what a way to mark the passage of millions. These doors to a better life hold so much symbolism to the struggles of refugees and immigrants of today, who have nowhere to go other than starting over in a foreign place.

My favourite theme in the story was that of acceptance. I live in the city of Minneapolis, which is a complete hodgepodge of cultures and tends to pat itself on the back for being fairly liberal. But interestingly enough, “Minnesota Nice” tends to end somewhat superficially. I found the idea of London residents’ homes being overrun with migrants so perfectly symbolic of how threatened the United States in particular is of being “invaded” by those who “don’t belong”. Meanwhile the new immigrants begin to sort themselves into factions of sameness, and this mimics the pop-ups of “China-town” and “Little Italy” that exist in every major city.

The two main characters did not particularly excite me, and it’s really for this reason that for me, this wasn’t a 5-star read. I gave it 4 on Goodreads.

Lastly, the end of the story in particular was both finite and unresolved – the idea that we come back to our origins and are left to wonder at what has changed so much, and what remains the same. In this I believe Mr. Hamid has captured the essence of humanity; so brief and yet incredibly poignant. I certainly would recommend this to anyone who is looking for a little book with a lot of punch.