Review: A Column of Fire 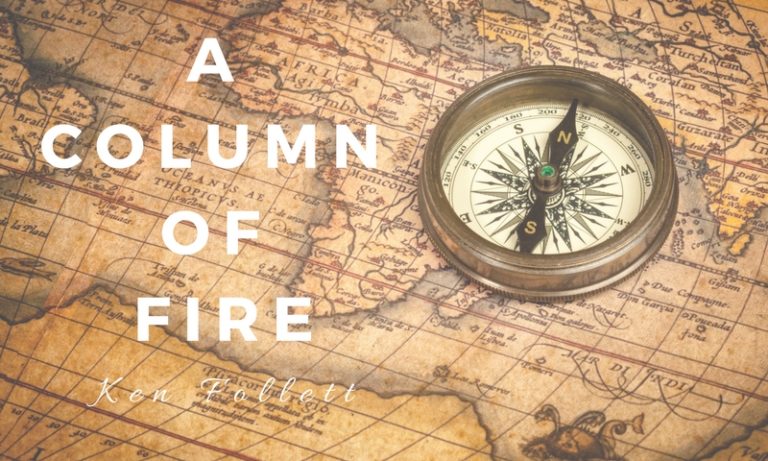 A Column of Fire is Ken Follett’s third book in the Kingsbridge series, which began with the much-loved Pillars of the Earth. If you’re a Follett fan and have been wondering if this new, super long book — measuring in at a whopping 928 pages — is worth the read, I’ve got you covered.

This one takes place in Elizabethan England, spanning the decades between the mid 1500s and early 1600s. The central conflict is again about religion, but this time features Catholics versus Protestants and the fight for religious tolerance. The main character, Ned, is one of Queen Elizabeth’s most important intelligence officers who keeps an eye on rebellion plans, international political machinations, assassination plots, and potential invasions. At an early age, Ned falls in love with Margery, but they find themselves destined for different things and on opposite sides of the religious debate.

There are of course a variety of other plot points as well, which take place in Spain, the Netherlands, France, Scotland, and even Switzerland. The novel spans many decades — basically Ned’s entire life — and a variety of famous historical and political events.

Readers familiar with Follett’s novels will find nothing unexpected here — you have your classic Follett villains, heroes, and romantic struggles. However, the espionage angle was a bit new and I enjoyed the cat and mouse thing the main character, Ned, and his nemesis, Rollo, had going on throughout the book.

That said, I don’t think this Follett’s best work. It’s great storytelling and excellent writing, as always, but is just a bit less focused than his usual work, with even more plot lines and characters. The reach is so broad at the beginning and the characters aren’t mentioned in regular intervals. One of the plot points also isn’t wrapped up, and there are weird asides between sections where Ned breaks into first person.

For a book this long, I’m not sure it’s worth the read. Follett is one of my favorite writers and it was great to be transported back to Kingsbridge again, but this one just didn’t hold my attention like his previous books.

If you’re an ultra fan of this series, you may want to check this one out, though keep in mind that it takes place centuries after the previous novel. If you like Follett’s writing but haven’t yet read his Century Trilogy series, I’d recommend checking out The Fall of Giants instead.

Additionally, I want to add that I listened to this as an unabridged audiobook and have no quibbles about the narration. John Lee is one of my all-time favorite narrators, and narrates other Follett favorites. This one was excellent, as usual. There is an abridged version though, which could be worth checking out.

Overall, I give this one three out of five stars.

That’s unfortunate since I love Pillars of the Earth so much! Seems like something to tackle in the future with a re-read of the series. Great review!