Review: The Pearl That Broke Its Shell 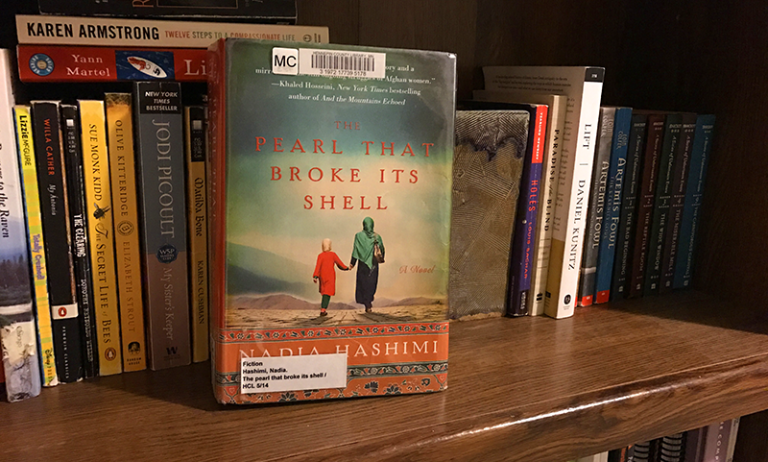 The Pearl That Broke its Shell by Nadia Hashimi takes place in Afghanistan and jumps between two characters, Rahima, and her great-aunt, Shekiba. Rahima’s story takes place in 2007 when at age 9, she embraces the custom of bacha posh, a tradition that allows young girls to dress like boys until puberty. Because of this, Rahima is able to provide for her mother and four sisters while her opium-addicted father lays around, refusing to let Rahima’s sisters attend school. But at age 13, Rahima’s parents can no longer provide for her and her sisters, and they are each married off. Rahima’s story intertwines with Shekiba’s and sadly, not much has changed for women since Shekiba’s time in the early 1900s.

Women are still seen as property of the men they marry, have little access to education, and often have nowhere to turn in the face of abusive marriages. I really enjoyed the story and the parallels between the two characters, but the message or lesson I was supposed to take away was a bit on the nose sometimes.

While the book’s message was not subtle, Hashimi has a talent for writing some nuanced prose. There are some beautiful nuggets of writing in here and I’ve listed one of many quotes I highlighted while reading.

“This life is difficult. We lose fathers, brothers, mothers, songbirds and pieces of ourselves. Whips strike the innocent, honors go to the guilty, and there is too much loneliness. I would be a fool to pray for my children to escape all of that. Ask for too much and it might actually turn out worse. But I can pray for small things, like fertile fields, a mother’s love, a child’s smile—a life that’s less bitter than sweet.”

With that said, the dialogue did fall flat and often didn’t feel realistic. And Shekiba and Rahima were difficult to tell apart. While 100 years separates them, their voices were written so similarly that sometimes I wasn’t sure whose story I was reading. Another review I read expanded on this saying that while the book took place in Afghanistan, the way it was written felt like it could have taken place anywhere at anytime. I do agree to some extent, but it was very apparent the culture was not European.

Barring some of the writing issues, I thought this was a powerful story. It made me realize just how fortunate I am and that many women are still living in horrific conditions. I gave this a 4 out of 5 stars because I loved the story and it still has me reflecting on it almost two weeks later. The Pearl That Broke Its Shell Nadia Hashimi William Morrow May 6, 2014 Hardcover 452

Afghan-American Nadia Hashimi’s literary debut novel, The Pearl that Broke Its Shell is a searing tale of powerlessness, fate, and the freedom to control one’s own fate that combines the cultural flavor and emotional resonance of the works of Khaled Hosseini, Jhumpa Lahiri, and Lisa See.

In Kabul, 2007, with a drug-addicted father and no brothers, Rahima and her sisters can only sporadically attend school, and can rarely leave the house. Their only hope lies in the ancient custom of bacha posh, which allows young Rahima to dress and be treated as a boy until she is of marriageable age. As a son, she can attend school, go to the market, and chaperone her older sisters.

But Rahima is not the first in her family to adopt this unusual custom. A century earlier, her great-aunt, Shekiba, left orphaned by an epidemic, saved herself and built a new life the same way.

Crisscrossing in time, The Pearl the Broke Its Shell interweaves the tales of these two women separated by a century who share similar destinies. But what will happen once Rahima is of marriageable age? Will Shekiba always live as a man? And if Rahima cannot adapt to life as a bride, how will she survive?

I was left with the same feeling you were- how lucky I am. Hashimi definitely writes with an agenda, but never having been to the Middle East I’m not sure how far from the truth it is. At the very least, she gives me perspective!

Agreed! I just loved the story so much that I didn’t care too much about the agenda. Glad you enjoyed the book too.

[…] notable TBRs include The Pearl That Broke Its Shell, Everyone Brave is Forgiven, The Glitter and the Gold, and Take Six Girls: The Lives of the Mitford […]

Hello! I just ordered this book and I’m wondering if it would be good for 8th graders. I’m looking for some new titles for my curriculum. Thanks.

I personally do not believe this book is suitable for eighth graders. That’s just my opinion. This book touched my heart and left me in tears when it was over. And anger.