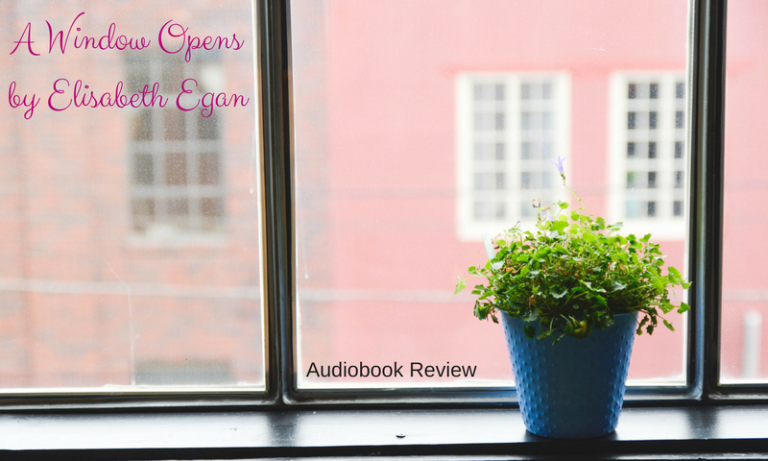 I heard Elisabeth Egan, author of A Window Opens, give an interview on The New York Times Book Review Podcast in the summer of 2015. She seemed like someone I would want to be friends with. Funny and determined, she wrote her debut while holding down a full-time job and raising children.  And yes, the story Egan tells hits super close to home – Alice Pearse, 38-year-old mother of three becomes overwhelmed with full-time work and family management and doesn’t know if she can stay afloat. A Window Opens is funny, engaging, and I sincerely rooted for Alice throughout.The novel hasn’t changed my life, but I’m glad it finally made it off my #TBR.

Here are the details:

Everything’s going fine in Filament, New Jersey. Three days a week, Alice works as the books editor at You, a fitness magazine. On the other days, she’s volunteering in her children’s classrooms, walking the dog, making healthy snacks, hitting spin classes, and hanging out with her friend Susannah, who owns the independent bookstore down the street.

And then, Alice’s life upends when her husband Nicholas arrives home on a too-early train to tell her the bad news: he won’t make partner at his fancy law firm. Suddenly, Alice needs a higher-paying, full-time job. In walks Genevieve Andrews and Scroll. Scroll, part of an Amazon-ish conglomerate, promises chic reading lounges with downloadable e-books, high-end nosh, and “carbon-based” first editions. Alice’s job is to curate the literature collection. A dream, right? Well, except for murky corporate jargon, unpredictable “pivots,” and Genevieve’s “berate and befriend” leadership style. Add in Alice’s aging parents and Nicholas’s growing pains in his own shop, and it’s a recipe for a terrible year. The plot turns are familiar, yes, but fun, and, at times, poignant.

Egan’s prose is clever and appealing, especially when she describes the environment at Scroll – Alice’s millennial colleagues, tense team meetings via Skype, and Outlook acronyms. The paragraphs clip along breathlessly, the long sentences and extensive detail matching Alice’s full-to-bursting calendar. Egan makes a few stylistic choices that elevate her work above other upmarket fiction I’ve enjoyed – the motif of the eponymous window, the convincing and understated mother-daughter relationship that Alice simultaneously relies upon and neglects, and the literary allusions, including one memorable Mo Willems quote that quite nicely captures Egan’s theme: “If you ever find yourself in the wrong story, leave.”

Julia Whelan’s narration is just as charming as the book itself. She personifies Alice’s children without smarm and adopts a funny, en pointe edge for Alice’s boss at Scroll. I prefer Whelan’s women – the men, especially Nicholas, have a low, gruff quality that seems sort of overdone. But, she nails the tone of the novel, capturing the ridiculousness of both PTA posturing and corporate finagling. This is a novel that works well in audio format.

If you’re a woman who feels like she’s trying to do it all and sometimes and/or mostly failing at everything (and, I’m sorry, but 99% of the women I know feel this way), this book might be equal parts mirror and shoulder squeeze. Yes, we don’t always get it right, but we’re really trying hard. And that counts for something, right? A Window Opens probably won’t be on your list of all-time faves, but it could very well be a novel that quickly circulates among your friends.