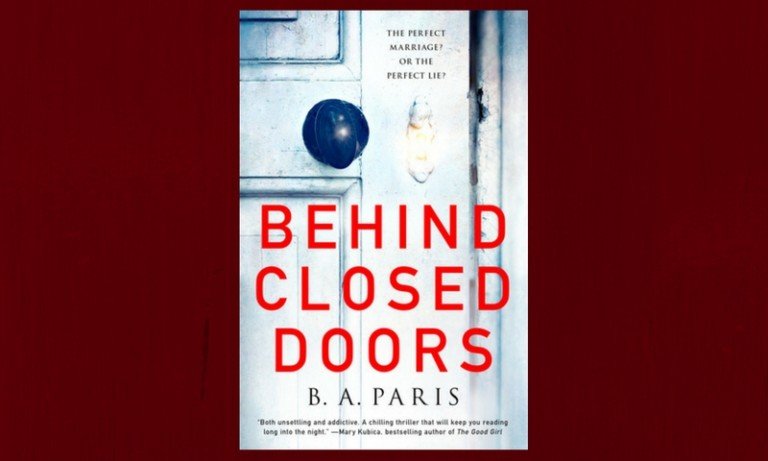 I read Behind Closed Doors by B.A. Paris for my September book club. We’ve started voting on which books we’ll read, and I’ll admit that I didn’t vote for this one. But I thoroughly enjoyed it for what it was, a quick and thrilling read with a horrifying twist.

Grace and Jack appear to be the perfect couple. They’re inseparable, go on amazing vacations, and host wonderful dinner parties. But there’s something not quite right about them. Jack’s good looks and easy charisma drew Grace in, but that quickly changed after their wedding day. Without giving away any spoilers, Jack has trapped Grace, both physically and…well, you’ll just have to read it to find out!

The story is told from Grace’s perspective. The story starts in present day, but jumps to various points in Grace and Jack’s past. For the first quarter of the book, you’re not really sure what’s wrong with their relationship, but the way it’s written makes you uneasy right away. Paris quickly reveals what’s wrong with Grace and Jack’s relationship and the rest of the book is spent building up to one moment.

Because Grace is the story’s narrator, we never get inside Jack’s brain and, as a result, his character development is rather shallow. Jack is presented as Evil. I use a capital E because it’s clear Jack is just plain ol’ bad, but we never really understand why. For me, an evil character whose bad choices are never explained, mildly justified, or understandable is pretty boring. I know it’s a quick read, but evil for evil’s sake doesn’t feel realistic. The plot is also a little clunky and while not predictable, I wasn’t surprised by the ending.

Problems aside, I read this in nearly one day and I couldn’t put it down! My boyfriend and I read almost every night before bed and at 10:30 he asked if we could turn the light off and go to sleep. Heck no, I couldn’t stop now! I only had a few chapters left. Luckily, I read this on my backlit iPad so I turned off the light, shooed him away, and curled up to finish the rest. The end was chilling and the build up to it gave my heart a workout. I finished the book, closed my eyes, and then could not fall asleep for almost an hour.

Overall, this is a quick, thrilling read that kept me on my toes. It wasn’t the best of its kind I’ve ever read, but it certainly wasn’t the worst. I’d recommend this if you’re looking for a very fast read, but I’d borrow from a friend or the library. 3 out of 5 stars.