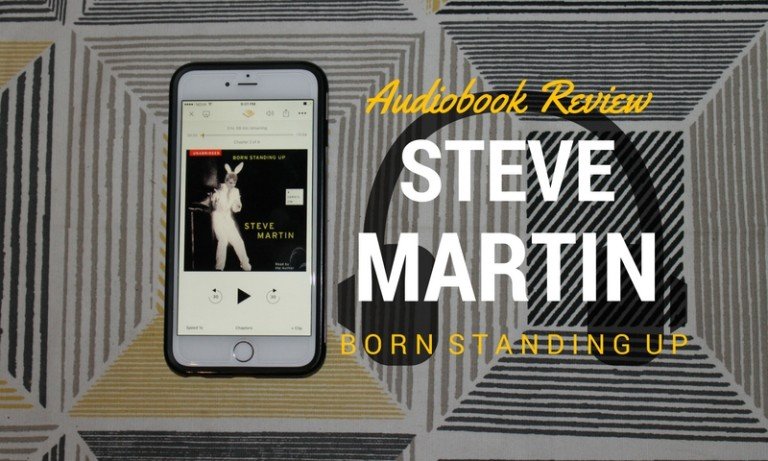 Steve Martin is one of my all-time favorite comedians and actors. As a 90s kid, I grew up watching Father of the Bride (Parts I and II), Bowfinger, and more. I love Martin as bumbling detective Clouseau in The Pink Panther and as an endearing father of 12 in Cheaper By the Dozen.

He’s also great on Saturday Night Live — Google “King Tut” or “Two Wild and Crazy Guys” if you don’t know what I’m talking about — and has made many SNL appearances throughout his long career.

Martin is incredibly talented. He writes, he sings, he’s a Grammy-award-winning banjo player, and he acts. But he started out as a comedian, and had a hugely successful comedy career before transitioning to film.

Born Standing Up is Martin’s memoir about his stand-up comedy career. He started out as a kid, selling guidebooks at Disneyland on weekends and working in a magic shop. From there, Martin worked his way into the Bird Cage Theatre and Knott’s Berry Farm, among other places.

He worked hard for his career, often performing several small shows a day and spending a lot of time on the road. Ultimately, this helped him develop his particular brand of comedy: an off-kilter, unconventional approach that eventually made him the most successful act in stand-up history.

The book is tagged as the story of Martin’s comedy career that recounts “why I did stand-up and why I walked away.” But it’s about so much more than that. It’s about a kid who likes to entertain people, a young man wondering if his career is going anywhere, a college kid studying logic, and a guy learning about dating. Martin doesn’t just tell the story of why he did comedy and why he quit; he recounts the entire experience from start to finish. It’s illuminating and incredibly well-done.

Born Standing Up is well-written, frank, honest, and entertaining. I listened to it as an audiobook narrated by Martin himself, which I think is part of the reason I enjoyed it so much.

Fellow 90s kids, do you remember how Martin sounds narrating Father of the Bride? There is something incredibly comforting about his voice, and that element is present in this audiobook as well.

I also really enjoy author-read memoirs, which adds a little something extra to the listening experience. The authors then get to say everything exactly how they intended for it to be said and the jokes come alive.

Overall, Martin gets 4.5 stars for both writing and performance. My only complaint is that it was too short. It clocks in at four hours, which was not nearly as much Steve as I needed in my life.

If you enjoy Steve Martin and his brand of comedy, this is a must-read. It’s short, entertaining, and an interesting look into Martin’s first decades as a stand-up comedian.