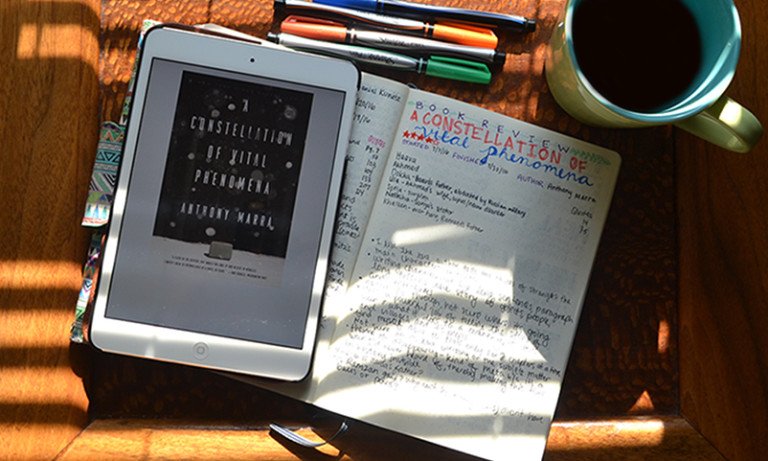 Typically, working the book’s title into the story annoys me because a lot of the time it doesn’t work. But in the case of A Constellation of Vital Phenomena I was more than pleasantly surprised. Not only did this definition of life hit me at my core, it sums up what this book is all about – life, its randomness, and how we each walk through it trying our best.

The story takes place over five days, but jumps between characters and memories from 1996 – 2004. The main storyline follows eight-year-old Havaa, whose father, Dokka, is taken the night before the story begins. Akhmed, Dokka’s childhood friend and neighbor, must hide Havaa from the Russian officials who captured her father. Living off sweet and condensed milk, amphetamines, and the memory of her sister, Sonja is the only doctor left in the capital city’s hospital. These three come together to tell a story about war and what it does to the people who aren’t fighting, but must deal with the consequences.

Constellations of Vital Phenomena takes place in Chechnya, a small republic of Russia, during the Second Chechan War in the early 2000s. If, like me, you’re not sure where Chechnya is located, it’s directly south of Russia and north of Georgia and Azerbaijan. And if, like me, you aren’t familiar with the Chechan Wars, here’s a quick summary based on what I found online. Chechnya declared its independence from Russia in 1991. From 1994-1996, Russia attempted to regain control, but failed. In between the first and second wars, nearly 40 million Chechens had been displaced from their homes and were living in refugee camps. In 1999, the Second War started and rebels fought against Russian-backed groups until 2006 when two major rebel leaders were killed. Of course, my simplified explanation is nowhere near sufficient so please do more research if you’d like to learn more.

The author’s storytelling is powerful and evocative. Marra has a way of giving the reader direct insight into the past and future of inanimate objects, characters, strangers, and memories. It doesn’t really make sense unless you see what I’m talking about. The following passage describes refugees who would stay with Havaa’s family.

“Those who had lost everything, even their reason, carried the most ridiculous things: a man who lost his parents and children in the same Uragan rocket blast carried the key to the flat they perished in; a thrice-widowed woman carried the framed portrait of a face no one had seen alive for over a hundred years, and no images of her husbands; a retired bureaucrat carried a twelve-hundred-page regulatory binder, convinced that those rules were forever inviolable. Others carried nothing at all.”

I just love how Marra was able to capture one person’s entire story into a sentence. At first, this writing style was distracting because these side stories vary in length and detail and it wasn’t always super clear which ones needed to be remembered. But I think that was the point. Marra made me realize that all things and people have histories and futures, even if no one else knows what those are. Deep stuff, huh? And in the end, Marra used this writing style to weave all the main characters’ stories together in a way that didn’t feel like it was trying too hard. Keeping track of the timeline was the the most difficult aspect of this book. The number of characters was overwhelming at times, but by the end of the book I knew who was who.

This story is deep, hopeful, and ripe with opportunities for discussion. I’d recommend this to anyone who enjoys a unique writing style and a thought-provoking story. 4 out of 5 stars!

I loved this book so much – whenever I see anyone mention it, I almost want to pick it up and read it again. His most recent story collection is AMAZING, too!

[…] currently reading A Constellation of Vital Phenomena, recommended by Janna. People’s stories during war really interest me, so I’m enjoying this one so far. Our […]