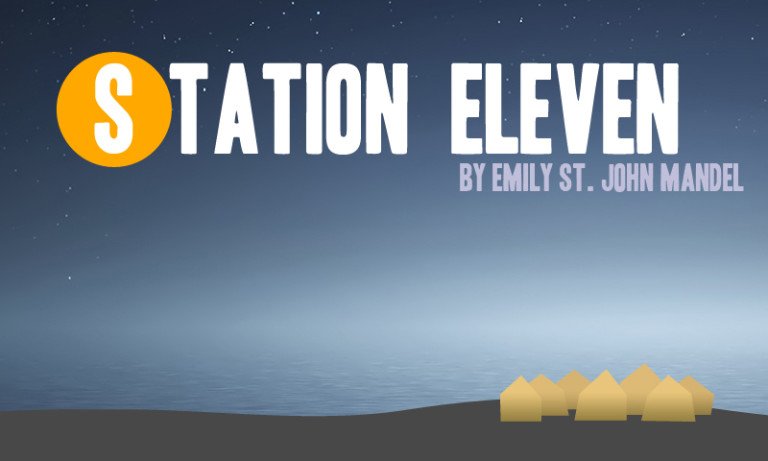 In April, my book club read Station Eleven. I dove into with my usual lack-of-research bravado – all I knew about the book was that it was some sort of post-apocalyptic novel. This genre really isn’t my cup of tea at all, but for book club I will read whatever is picked, because chatting about books with some wonderful ladies is my happy place.

The premise of the story is that a new type of flu wipes out most of the population. The small percentage that’s left has to learn how to survive without most modern conveniences, and learn an entire new way of life. The story bounces back and forth through time to follow different story lines from before and after the flu. The best part of the story, in my opinion, was the way all of these story lines were related, and each one gave you a little nugget that somehow tied into another part of the story.

This book was both easy and difficult to read at the same time. It was easy because the writing style was simple, but the jumping around in the story and following so many different story lines was difficult. It was sort of like a big puzzle that you put together really slowly. There were also approximately a gagillion characters, and I had problems keeping them all straight and remembering who they were. After I had a whole half page in my reading journal filled with a list of characters, I just stopped writing them down.

The story, though, was interesting and enjoyable to read. It held my attention, and I was definitely excited about what might happen next. However, I felt like I didn’t have any time to connect with any of the characters. I liked a couple of them, but there was too little time spent on each one. So you’d be reading a part of the story about a character you loved, but then you’d be jerked away to another part of the story, possibly in a whole other decade, before or after the collapse of civilization.

I did love the way the story lines all had this shared thread that weaved them all together in some way. There was definitely a lot of creativity that went into it! I also can’t finish this review without talking about the comic book. The book is named for the comic book in the story, and man, did I want to see it. I’m not a comic book reader, but I wanted to read this one. Mandel so beautifully described how elaborate the drawings were, and how enthralling the story. At times, I felt like I’d rather be reading the comic than the book in my hands!

So, in conclusion, it was pretty good, but it wasn’t my favorite. Props to Mandel for creating such an intricate story, but I got lost in it at points (not in the good way you get lost in books like literary quicksand). I give this one 3 out of 5 stars.

This is actually one of my all-time favorite books. I’ve read it three times! I’m sorry you didn’t like it quite as much. I find the way the stories are woven together amazing. I also find the virus (believe it or not) realistic. I hope you enjoy your book club discussion!

Hey Meg! Thanks for the comment :] That’s awesome that you’ve read it three times! I actually think I’d appreciate it more the second time, because I wouldn’t be trying as hard to follow characters. I did really like the way the stories are woven together – it was definitely unique and really cool! Mandel has some serious story weaving skills. Also, I really wish someone would make the comic, because it sounds so awesome, I really want to read it!!

Interesting! My roommate owns this book – it’s sitting on our bookshelf between the living room and the kitchen so each time I pass by it on my way to the kitchen I think, “I need to read the synopsis of that book on my way back to my room,” and then I always forget. I’m not sure if I would like it or not, but your not-necessarily-negative review, coupled with Meg’s comment makes me think I should put it on my list anyway. 😀

Hahaha! You probably should, so that you can be the tie breaker! Actually, our new contrib Kathleen told me she loved it too, so maybe I’m the odd duck here. There were a couple ladies at my book club that felt the same way I did, though, but also some who really loved it. I just kept wanting to form relationships with the characters, but then the one I’d be loving at the time would disappear and I wouldn’t read about them again for 50 pages. I think that’s what made it hard for me to fall in love with.

Hello Joli (and Meg and Maggie). You are all just making me want to read this all the more. It sounds really intriguing- in terms of story and structural approach. I wonder if it was the point to have so many characters that you can’t get attached? Maybe because life would really be that uncertain in a post-apocalyptic world? Will let you know if I think that when I actually read it. I always find it fascinating to see what other people bring/ take from the stories they read. We are all so different- makes sharing views fascinating. On that note, were your book club discussions interesting, Joil?

It’s definitely a really well put-together story! I did love that part about it. The author is definitely a master story weaver! Maybe it could be something like that…I’m not sure. I felt like there were that many because all of them weaving together were so awesome, but then different characters being in all of them just left me scrambling to keep up. The conversation was definitely interesting! Several other ladies felt the same way I did and were confused by all the characters, whereas some were so in love with the story that they didn’t mind that part so much. I think it also has to do with what you like the most about books as you’re reading. For me, literary fiction is my favorite genre, so when I read something that’s more about the story than the prose and the composition, I tend to not have as strong of a connection.

[…] This book received a lot of accolades and good reviews from a lot of people who’s opinions I trust. Which is why I’m including it on this list. For me, however, I found the back and forth timeline and amount of characters confusing and frustrating. It was hard to connect to one character because the story would jerk away to another place and time as soon as I became invested in a particular story line. The fragmented plot may reflect a desolate society attempting to rebuild. Check out Joli’s review of Station Eleven here. […]